Stonehill College is a private college in Easton, Massachusetts. It was founded in 1948 and is located on the original estate of Frederick Lothrop Ames, Jr. with 29 buildings that complement the original Georgian-style Ames mansion.

In the autumn of 1934, the Holy Cross Fathers in North Dartmouth began to look for new quarters because of increasing seminary enrollment. The current Stonehill campus was purchased from Mrs. Frederick Lothrop Ames, Jr. on October 17, 1935. The initial purchase included 350 acres (1.4 km2) and the original Ames mansion; the congregation purchased the remaining 190 acres (0.77 km2) from Mrs. Cutler two years later. Frederick Lothrop Ames, Jr. was the great-grandson of Oliver Ames, Sr., who came to Easton in 1803 and established the Ames Shovel Company.

The Commonwealth of Massachusetts authorized the Congregation of Holy Cross to establish Stonehill College on the Frederick Lothrop Ames, Jr. estate on June 30, 1948. In September of that year the college enrolled 134 men as the first class. Classes were held in the mansion and in the Ames Gym.

The first building built by the college was the Science Building which opened in February 1949. In 1974 the building was renovated and renamed the Tracy Science Building in honor of David Tracy, a former Stonehill advisor and trustee. After the opening of the Shields Science Center in 2009, the building was converted to be used by university administration and was renamed Merkert-Tracy Hall.

In June 2017 the college announced that W.B. Mason would be donating $10 million to open the Leo J. Meehan School of Business. The school is named after alumnus and W.B. Mason CEO Leo Meehan, and accommodates programs in accounting, finance, international business, management, marketing, economics, and healthcare administration. [4]

The first issue of the College newspaper, The Summit, was published on November 3, 1949. In the fall of 1951 the college decided to become a coeducational organization and enrolled 19 women. The first class graduated from Stonehill on the first Sunday of June 1952 and consisted of 73 men.

Through the May School of Arts and Sciences and the Meehan School of Business, Stonehill awards on the undergraduate level the B.A., B.S., and B.S.B.A. They have also added several master's degree programs. The Integrated Marketing Communications master's program was launched during the 2017-18 school year, a Special Education (K-8) program was launched in May 2019, and a Data Analytics program launched in Fall of 2020.

Stonehill offers 47 major programs, the opportunity to double major or participate in one of the college's 51 minor programs. [5] Stonehill College is accredited by the New England Commission of Higher Education. [6]

The MacPhaidin Library, named in honor of Stonehill College's eighth president, Father Bartley MacPhaidin, C.S.C., was constructed in 1997 and opened in May 1998, at the college in North Easton, Massachusetts. The MacPhaidin Library is three stories high and covers 600,000 square feet. It houses a collection of 250,000 print volumes, including more than 100 full-text databases and indexes, and two computer labs. Various works of local art and history are on display at the library as well as a large collection of historical Irish documents and literature.

Ace's Place Cafe, located on the ground floor of the MacPhaidin Library, was renovated in the summer of 2012 and now serves Starbucks coffee and Sodexo food products. Additional booth and table seating has been added and use of the facility is open for the enjoyment of students, staff, and outside patrons.

Stonehill provides guaranteed 4 years of housing to students admitted as residential students. The housing is set up as freshman/sophomore and junior/senior. O'Hara Hall and The Holy Cross Center are designated freshman traditional-style dorms.

Both freshmen and sophomores have the chance to live in Boland Hall, Corr Hall, and Villa Theresa Hall.

The Athletic Department fields 21 competitive NCAA Division II intercollegiate varsity sports. The College's combination of academic and athletic success has garnered Stonehill the #4 ranking in the country among NCAA Division II schools in the Collegiate Power Rankings that are published by the National College Scouting Association. Furthermore, Stonehill finished 65th in the overall NCSA Top 100 Power Rankings across all three NCAA divisions.

W.B. Mason Stadium is a 2,400 seat, multipurpose sports stadium. Opened in 2005 at a cost of $4 million, it is the home of Skyhawk football, lacrosse, field hockey, and track & field. [7] W.B. Mason, an office-supplies dealer based in nearby Brockton, Massachusetts, and its alumni employees contributed $1.5 million toward the project. [8]

Easton is a town in Bristol County, Massachusetts, United States. The population was 23,112 at the 2010 census. It is part of the Greater Boston area. 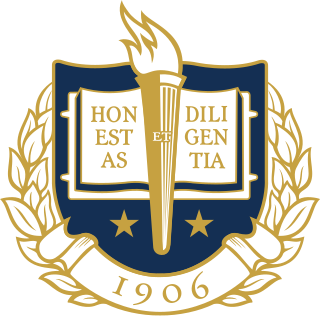 Suffolk University is a private research university in Boston, Massachusetts. With 7,560 students, it is the eighth largest university in metropolitan Boston. It is categorized as a Doctoral Research University by the Carnegie Classification of Institutions of Higher Education. It was founded as a law school in 1906 and named after its location in Suffolk County, Massachusetts. The university's notable alumni include mayors, dozens of U.S. federal and state judges and United States members of Congress.

Oliver Ames was an American businessman, investor, philanthropist, and Republican politician who served as the 35th Governor of Massachusetts from 1887 to 1890.

A. (Albert) Michael DeSisto was an American educator best known for founding and directing the DeSisto Schools.

Louis Adams Frothingham was a United States Representative from Massachusetts. 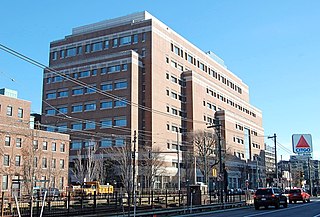 The Questrom School of Business is the business school at Boston University in Boston, MA, USA. Founded in 1913 as the College of Business Administration, the school offers undergraduate and graduate programs. 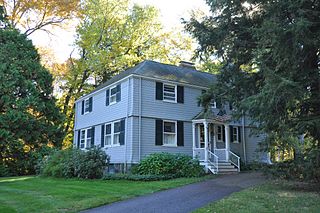 The F. L. Ames Gardener's Cottage is a small residential house in North Easton, Massachusetts. This building was designed in 1884 by noted American architect Henry Hobson Richardson and built the following year. This building sits on the original Ames estate and was designed soon after the neighboring Ames Gate Lodge. Frederick Lothrop Ames also commissioned Richardson to build the nearby Old Colony Railroad Station. Two other notable buildings in North Easton, the Ames Free Library and Oakes Ames Memorial Hall, were also Richardson designs and commissioned by the Ames family.

The Stonehill Skyhawks are the intercollegiate athletic teams that represent Stonehill College, located in Easton, Massachusetts, in NCAA sporting competitions. All current Skyhawk athletic teams compete at the Division II level and are members of the Northeast-10 Conference. Stonehill has been a member of the NE-10 since 1980. 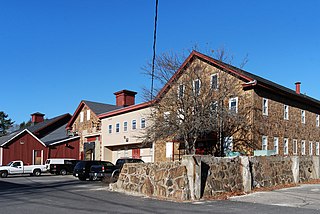 The Ames Shovel Shops, also known as Ames Shovel Works or Ames Shovel Shop, is a historic 19th century industrial complex located in North Easton, Massachusetts. It is part of the North Easton Historic District, and consists of several granite buildings constructed between 1852 and 1885, along with several newer additions and outbuildings dating to about 1928.

Rev. Fr. Robert F. Griffin, CSC was a Roman Catholic Priest for the Congregation of Holy Cross at the University of Notre Dame.

Oliver Ames Sr., or "Old Oliver", was the family patriarch of the Ames family of Easton, Massachusetts. He established the family shovel business, which over generations grew to become one of the largest family fortunes in New England.

Lothrop may refer to:

Simmons University is a private women focused undergraduate university and private co-educational graduate school in Boston, Massachusetts. It was established in 1899. 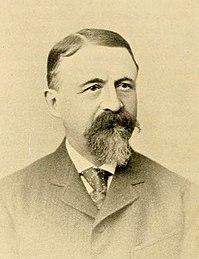 Frederick Lothrop Ames was heir to a fortune in railroads and shovel manufacturing. He was Vice President of the Old Colony Railroad and director of the Union Pacific railroad. At the time of his death, Ames was reported to be the wealthiest person in Massachusetts.

The Ames family is one of the oldest and most illustrious families of the United States. The family's branches are descended from John Ames, the son of a 17th-century settler of the Province of Massachusetts Bay, and numerous public and private works throughout the U.S. are named after family members, including the city of Ames, Iowa.

Mary Shreve (Ames) Frothingham was born into the prominent Ames family of Easton, Massachusetts. She held crucial roles in the development of many local and nationally recognized organizations through leadership and financial contributions. She assumed modesty in her personal life so as to give generously to others. Her legacy in her hometown can still be enjoyed by many at the Ames Free Library, Unity Church, Frothingham Hall, Frothingham Park and her home ‘Wayside’.