Strava is an American internet service for tracking human exercise which incorporates social network features. It is mostly used for cycling and running using GPS data. [4] Strava uses a freemium model with some features only available in the paid subscription plan. The service was founded in 2009 by Mark Gainey and Michael Horvath and is based in San Francisco, California.

Strava records data for a user's activities which can then be shared with the user's followers or shared publicly. If an activity is shared publicly, Strava automatically groups activities that occur at the same time and place (such as taking part in a marathon, sportive or group ride). An activity's recorded information may include a route summary, elevation (net and unidirectional), speed (average, minimum, maximum), timing (total and moving time), power and heart rate. Activities can be recorded using the mobile app or from devices manufactured by third parties like Garmin, Google Fit, Suunto, and Wahoo. Activities can also be entered manually via the Strava website.

Strava incorporates social media features which allow users to post their exercises to followers. Alongside a GPS map of their exercise users can also post pictures. Followers can then comment on posts and give 'kudos' in the form of a like button.

Beacon is a feature that allows Strava users to share their location real time with anyone they choose to, and nominate others as a safety contact for their workout.

Users can also enter virtual exercise events on the platform.

In November 2017, Strava published a "Global Heatmap"—a "visualization of two years of trailing data from Strava's global network of athletes." [7] In January 2018, an Australian National University student studying international security discovered that this map had mapped military bases, including known U.S. bases in Syria, and forward operating bases in Afghanistan, and HMNB Clyde—a Royal Navy base that contains the United Kingdom's nuclear arsenal. [8] [9] [10] [11] The findings led to continued scrutiny over privacy issues associated with fitness services and other location-aware applications; Strava's CEO James Quarles stated that the company was "committed to working with military and government officials" on the issue, and would be reviewing its features and simplifying its privacy settings. [12] [13] Although users can now opt out of having their data aggregated on the global heatmap, the original data that contains sensitive information has been archived on GitHub. [14] [15]

Google Maps is a web mapping platform and consumer application offered by Google. It offers satellite imagery, aerial photography, street maps, 360° interactive panoramic views of streets, real-time traffic conditions, and route planning for traveling by foot, car, air and public transportation. As of 2020, Google Maps was being used by over 1 billion people every month around the world.

Mobile phone tracking is a process for identifying the location of a mobile phone, whether stationary or moving. Localization may be effected by a number of technologies, such as the multilateration of radio signals between (several) cell towers of the network and the phone or by simply using GPS. To locate a mobile phone using multilateration of mobile radio signals, the phone must emit at least the idle signal to contact nearby antenna towers and does not require an active call. The Global System for Mobile Communications (GSM) is based on the phone's signal strength to nearby antenna masts.

Google Calendar is a time-management and scheduling calendar service developed by Google. It became available in beta release April 13, 2006, and in general release in July 2009, on the web and as mobile apps for the Android and iOS platforms.

Fitbit is an American consumer electronics and fitness company. It produces wireless-enabled wearable technology physical fitness monitors and activity trackers such as smartwatches, pedometers and monitors for heart rate, quality of sleep, and stairs climbed as well as related software. It was acquired by Google in 2021.

Waze is a subsidiary of Google that provides satellite navigation software. It works on smartphones and other computers that have GPS support. It provides turn-by-turn navigation information and user-submitted travel times and route details, while downloading location-dependent information over a mobile telephone network. Waze describes its app as a community-driven GPS navigation app, which is free to download and use.

Facebook Messenger is an American instant messaging app and platform developed by Facebook, Inc. Originally developed as Facebook Chat in 2008, the company revamped its messaging service in 2010, and subsequently released standalone iOS and Android apps in August 2011 and standalone Facebook Portal hardware for Messenger-based calling in Q4 2018. Later on, Facebook has launched a dedicated website interface (Messenger.com), and separated the messaging functionality from the main Facebook app, allowing users to use the web interface or download one of the standalone apps. In April 2020, Facebook officially released Messenger for Desktop, which is supported on Windows 10 and macOS and distributed on Microsoft Store and App Store respectively.

Runkeeper is a GPS fitness-tracking app for iOS and Android launched in 2008. In late 2011, Runkeeper secured $10 million in a Series B financing, led by Spark Capital. In February 2016 Runkeeper was acquired by ASICS.

Runtastic GmbH is a digital health and fitness company from Austria. Adidas Runtastic develops activity tracking apps and services such as training logs, data analysis, comparisons to other users, and other functions to help users improve their overall fitness.

Null Island is the name used to refer to the point on the Earth's surface where the Prime Meridian and the Equator intersect, at zero degrees latitude and zero degrees longitude. Using the WGS84 datum, this point is located in international waters in the Gulf of Guinea, in the Atlantic Ocean, off the coast of West Africa. The point is marked with a permanent buoy.

Google Play Services is a proprietary background service and API package for Android devices from Google. When it was introduced in 2012, it provided access to the Google+ APIs and OAuth 2.0. It expanded to cover a variety of Google services, allowing applications to communicate with the services through common means. 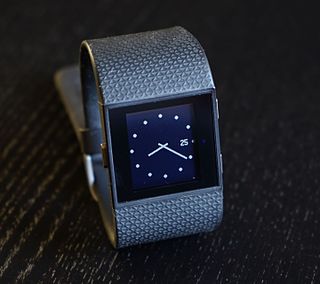 An activity tracker, also known as a fitness tracker, is a device or application for monitoring and tracking fitness-related metrics such as distance walked or run, calorie consumption, and in some cases heartbeat. It is a type of wearable computer. The term is now primarily used for smartwatches that are synced, in many cases wirelessly, to a computer or smartphone for long-term data tracking. There are also independent mobile and Facebook apps. Some evidence has found that the use of these type of devices results in less weight loss rather than more. Sleep tracker devices have a tendency to underdetect wakefulness.

Google Fit is a health-tracking platform developed by Google for the Android operating system, Wear OS and Apple Inc.'s iOS. It is a single set of APIs that blends data from multiple apps and devices. Google Fit uses sensors in a user's activity tracker or mobile device to record physical fitness activities, which are measured against the user's fitness goals to provide a comprehensive view of their fitness.

The Xiaomi Mi Band is a wearable activity tracker produced by Xiaomi, unveiled during a Xiaomi launch event on 22 July 2014. This article is mainly about the original Mi Band; later versions have separate articles.

Azumio is a mobile health company that specializes in biometric mobile technology. Founded in 2011, Azumio develops Apple iOS and Android health apps and services. Azumio has released 24 apps on iOS, 5 apps on Android, and 3 apps on Windows Phone. Azumio is a venture-backed company whose investors include Founders Fund, Accel Partners, and Felicis Ventures. The company is headquartered in Palo Alto, California.

Ride sharing networks face issues of user privacy like other online platforms do. Concerns surrounding the apps include the security of financial details, and privacy of personal details and location. Privacy concerns can also rise during the ride as some drivers choose to use passenger facing cameras for their own security. As the use of ride sharing services become more widespread so do the privacy issues associated with them.

Facebook has faced a number of privacy concerns. These stem partly from the company’s revenue model that involves selling information about its users, and the loss of privacy this could entail. In addition, employers and other organizations and individuals have been known to use Facebook data for their own purposes. As a result, individuals' identities have sometimes been compromised without their permission. In response, pressure groups and governments have increasingly asserted the users’ right to privacy and to be able to control their personal data.

Fitness, formerly Activity, is an exercise tracking companion app announced by Apple Inc. during their September 2014 Special Event. The app is available on iPhones running iOS 8.2 or above for users with a connected Apple Watch. The application displays a summary view of user's recorded workouts from the Apple Watch or supported third-party apps and exercise equipment.

Pre-installed iOS apps, referred to in the App Store as 'Built-In Apps', are a suite of mobile applications developed by Apple Inc. which are bundled with iOS and installed by default or through a system update. Many of the default apps found on iOS have counterparts on Apple's other operating systems macOS, iPadOS, watchOS, and tvOS, which are often modified versions of or similar to the iOS application. As each app is integrated into the operating system itself, they often feature greater support for system features than third-party alternatives and are quick to adapt new features of iOS.