"Streets of Sorrow/Birmingham Six" is a political song by the Irish folk punk band The Pogues, written by Terry Woods and Shane MacGowan and included on the band's 1988 album If I Should Fall from Grace with God .

The song is divided into two parts, the first ("Streets of Sorrow"), written and sung by Woods, describes the pain and sadness on the streets of Northern Ireland at the height of the Troubles. The song is told from the point of view of someone who is leaving the place due to the increasing violence and conflict and who vows never to return "to feel more sorrow, nor to see more young men slain".

The second part of the song ("Birmingham Six"), written and sung by MacGowan, is a demonstration of support to the Birmingham Six and Guildford Four and the view that they were the victims of a miscarriage of justice and that their confessions had been extracted by torture at the hands of the West Midlands Serious Crime Squad, claiming "there were six men in Birmingham, in Guildford there's four, who were picked up and tortured and framed by the law, and the filth got promotion, but they're still doing time, for being Irish in the wrong place and at the wrong time". Although this was later admitted to be the case by the British courts, at the time the people involved were still convicted and imprisoned for carrying out the Birmingham pub bombings and the Guildford pub bombing during the 1970s.

The last couplet of the song reads, "While over in Ireland eight more men lie dead/ Kicked down and shot in the back of the head", which McGowan stated was a reference to the Loughgall ambush. [1]

"Streets of Sorrow/Birmingham Six" proved to be hugely controversial. The group performed the song on the Channel 4 show Friday Night Live on 15 April 1988, but the show cut to advertising before the song was finished. James Fearnley, biographer of The Pogues, wrote that the band had said in advance that they would be performing and performed the song in a camera rehearsal, without any comment being made. [2]

The song was subsequently banned from being broadcast by the Independent Broadcasting Authority under laws which were also responsible for a ban on the broadcasting of direct interviews with members of Sinn Féin and other groups. The IBA claimed the song alleged that "convicted terrorists are not guilty, the Irish people were put at a disadvantage in the courts of the United Kingdom and that it may have invited support for a terrorist organisation such as the IRA".

In 1991, the Birmingham Six were released after having their convictions overturned in the Court of Appeal and the allegations of torture at the hands of authorities were vindicated. The song's ban was subsequently lifted, yet when it featured on a Channel 4 documentary in the early 1990s the channel was still not allowed to play the song, only to show the words on screen.[ citation needed ]

Gerard Adams is an Irish republican politician who was the president of Sinn Féin between 13 November 1983 and 10 February 2018, and served as a Teachta Dála (TD) for Louth from 2011 to 2020. From 1983 to 1992 and from 1997 to 2011, he followed the policy of abstentionism as a Member of Parliament (MP) of the British Parliament for the Belfast West constituency. 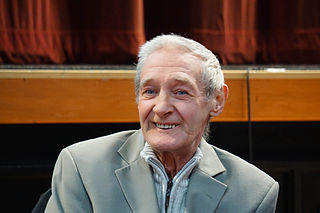 The Birmingham Six were six Irishmen who were each sentenced to life imprisonment in 1975 following their false convictions for the 1974 Birmingham pub bombings. Their convictions were declared unsafe and unsatisfactory and quashed by the Court of Appeal on 14 March 1991. The six men were later awarded financial compensation ranging from £840,000 to £1.2 million.

The Guildford Four and Maguire Seven were the collective names of two groups whose convictions in English courts in 1975 and 1976 for the Guildford pub bombings of 5 October 1974 were eventually quashed after long campaigns for justice. The Guildford Four were wrongly convicted of bombings carried out by the Provisional Irish Republican Army (IRA); the Maguire Seven were wrongly convicted of handling explosives found during the investigation into the bombings. Both groups' convictions were eventually declared "unsafe and unsatisfactory" and reversed in 1989 and 1991 respectively after they had served up to 15–16 years in prison. Along with the Maguires and the Guildford Four, a number of other people faced charges relating to the bombings, six of them charged with murder, but these charges were dropped. No one else was charged with the bombings, or supplying the material; three police officers were charged with conspiracy to pervert the course of justice, but found not guilty. 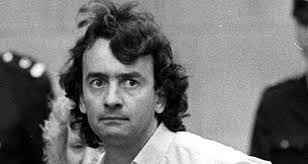 GerardPatrick "Gerry" Conlon was an Irish man known for being one of the Guildford Four who spent 15 years in prison after being wrongly convicted of being a Provisional IRA bomber.

Michael Stone is a British ex-member of the loyalist Ulster Defence Association paramilitary group in Northern Ireland, convicted of three counts of murder committed at an IRA funeral in 1988. In 2000 he was released from prison on licence under the Good Friday Agreement. In November 2006, Stone was charged with attempted murder of Martin McGuinness and Gerry Adams, having been arrested attempting to enter the parliament buildings at Stormont while armed. He was subsequently convicted and sentenced in 2008 to a further 16 years' imprisonment, before being released on parole in 2021.

Neck are a six-piece London-Irish Celtic punk band from the North London neighbourhood of Holloway. Following their front-man's cathartic 'Tour of Duty' as a member of the original line-up of Shane MacGowan and the Popes, Neck were 'born in a bottle' during late-night drinking sessions in 1994 by a mixture of Irish emigrant and second-generation Irish drinking buddies. The band takes their lead, both musically and ideologically, from two other London bands: The Clash and The Pogues, blending Punk rock with traditional Irish music to play a London-Irish style known as 'Psycho-Ceilídh'.

Brian O'Higgins, also known as Brian na Banban, was an Irish writer, poet, soldier and politician who was a founding member of Sinn Féin and served as President of the organisation from 1931 to 1933. He was a leading figure within 20th century Irish republicanism and was widely regarded for his literary abilities. 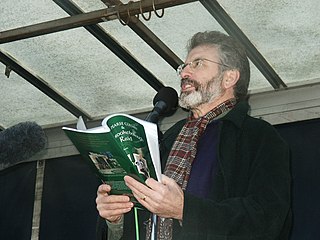 From October 1988 to September 1994 the British government banned broadcasts of the voices of representatives from Sinn Féin and several Irish republican and loyalist groups on television and radio in the United Kingdom (UK). The restrictions, announced by the Home Secretary, Douglas Hurd, on 19 October 1988, covered eleven organisations based in Northern Ireland. The ban followed a heightened period of violence in the course of the Troubles, and reflected the UK government's belief in a need to prevent Sinn Féin from using the media for political advantage.