Syncarida is a superorder of crustaceans, comprising the two extant orders Anaspidacea and Bathynellacea, [1] [2] and the extinct order Palaeocaridacea. [3] Fifty-nine living genera are known, in six families: [4] 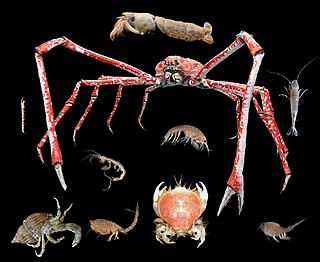 Rhithropanopeus harrisii, is a small omnivorous crab native to Atlantic coasts of the Americas, from New Brunswick to Veracruz. 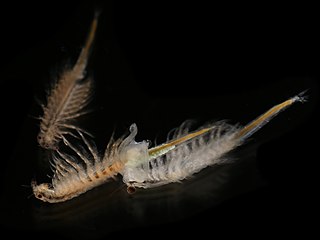 Anostraca is one of the four orders of crustaceans in the class Branchiopoda; its members are also known as fairy shrimp. They live in vernal pools and hypersaline lakes across the world, and they have even been found in deserts, ice-covered mountain lakes and Antarctic ice. They are usually 6–25 mm (0.24–0.98 in) long. Most species have 20 body segments, bearing 11 pairs of leaf-like phyllopodia, and the body lacks a carapace. They swim "upside-down" and feed by filtering organic particles from the water or by scraping algae from surfaces. They are an important food for many birds and fish, and some are cultured and harvested for use as fish food. There are 300 species spread across 8 families.

The superorder Peracarida is a large group of malacostracan crustaceans, having members in marine, freshwater, and terrestrial habitats. They are chiefly defined by the presence of a brood pouch, or marsupium, formed from thin flattened plates (oostegites) borne on the basalmost segments of the legs. Peracarida is one of the largest crustacean taxa and includes about 12,000 species. Most members are less than 2 cm (0.8 in) in length, but the largest is probably the giant isopod which can reach 76 cm (30 in).

Eumalacostraca is a subclass of crustaceans, containing almost all living malacostracans, or about 40,000 described species. The remaining subclasses are the Phyllocarida and possibly the Hoplocarida. Eumalacostracans have 19 segments. This arrangement is known as the "caridoid facies", a term coined by William Thomas Calman in 1909. The thoracic limbs are jointed and used for swimming or walking. The common ancestor is thought to have had a carapace, and most living species possess one, but it has been lost in some subgroups. 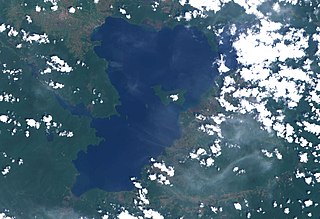 Lake Towuti is a lake in South Sulawesi, Indonesia. Surrounded by mountains, it is the largest lake of the island of Sulawesi and one of the five lakes of the Malili Lake system. A river flows from the lake to the Boni Bay. The town Laronda is located on its shore.

Eucrenonaspides oinotheke is a species of crustacean in the family Psammaspidae, endemic to Tasmania, the only species described in the genus Eucrenonaspides. It was described from a spring at 9 Payton Place, Devonport, Tasmania in 1980, making it "the first spring-dwelling syncarid recorded from the Australian region". It is listed as a vulnerable species on the IUCN Red List. A further undescribed species is known from south-western Tasmania.

Anaspidacea is an order of crustaceans, comprising eleven genera in four families. Species in the family Anaspididae vary from being strict stygobionts to species living in lakes, streams and moorland pools, and are found only in Tasmania. Koonungidae is found in Tasmania and the south-eastern part of the Australian mainland, where they live in the burrows made by crayfish and in caves. The families Psammaspididae and Stygocarididae are both restricted to caves, but Stygocarididae has a much wider distribution than the other families, with Parastygocaris having species in New Zealand and South America as well as Australia; two other genera in the family are endemic to South America, and one, Stygocarella, is endemic to New Zealand.

Moinidae is a crustacean family within the order Cladocera. Species within this family are widely occurring, including North America and Africa. In newer classifications, it is sometimes included in the family Daphniidae. 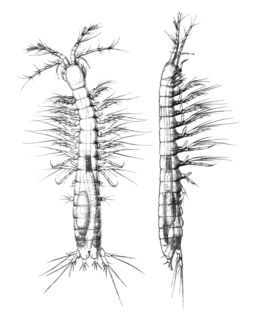 Bathynellacea is an order of crustaceans which live interstitially in groundwater. Some species can tolerate low salt concentrations, and at least one African species is a thermophile, living in hot springs and tolerating temperatures up to 55 °C (131 °F). Bathynellaceans are minute, blind, worm-like animals with short, weak legs, reaching a maximum size of 3.4 millimetres (0.13 in). They are found on every continent except Antarctica, although they are missing from some islands, including Fiji, New Caledonia and the Caribbean islands. There are two families, Bathynellidae and Parabathynellidae; a third family, "Leptobathynellidae", is considered a synonym of Parabathynellidae.

Cyprididae is "the most diverse group of freshwater ostracods". It contains 1000 species, which represents 50% of the known species of freshwater ostracods. Around 60% of genera in the family are endemic to a single zoogeographic region. The family contains 25 subfamilies, and is most diverse in the Afrotropical realm, with over 300 species in 45 genera. Many Cyprididae occur in temporary water bodies and have drought-resistant eggs, mixed/parthenogenetic reproduction and ability to swim. These biological attributes pre-adapt them to form successful radiations in these habitats. Bennelongia is an interesting genus of the family Cyprididae. It may be the last true descendant genus of the Mesozoic lineage of Cypridea, which was a dominant lineage of ostracod in non-marine waters in the Cretaceous.

Brevisomabathynella cooperi is a species of crustacean. It was first found in Western Australia. It stands out within its family by its pygmoid body and its long head. At the same time, its mouthparts show: a very large labrum with a great number of teeth; its incisor process with four main teeth and three very small other teeth, arranged in two groups; and the distal-inner spines of the farthermost endite of its maxillule being longer than its terminal spines. These distinct characters appear to have developed due to its predatory habits, which in turn are evidenced by the presence of an ostracod prey in the gut of B. cunyuensis, its sister species. This genus closely resembles the genus Notobathynella. 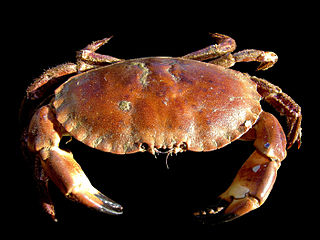 Bosminidae is a family of anomopods in the order Diplostraca. There are at least 3 genera and 40 described species in Bosminidae.

Macrothricidae is a family of anomopods in the order Diplostraca. There are about 17 genera and at least 80 described species in Macrothricidae.

Cactus is a genus of anomopods in the family Macrothricidae. There is only one described species, Cactus cactus. C. cactus can be found in Chile.

Podonidae is a family of onychopods in the order Diplostraca. There are about 8 genera and at least 20 described species in Podonidae.

Evadne is a genus of onychopods in the family Podonidae. There are at least four described species in Evadne.