The Last of the Mohicans (1920 American film)

The Last of the Mohicans is a 1920 American Western silent film written by Robert A. Dillon, adapted from James Fenimore Cooper's 1826 novel of the same name. Clarence Brown and Maurice Tourneur co-directed the film. (Brown took over the direction of the film after Tourneur injured himself in a fall.) It is a story of two English sisters meeting danger on the frontier of the American colonies, in and around the fort commanded by their father. The adventure film stars Wallace Beery, Barbara Bedford, Lillian Hall, Alan Roscoe and Boris Karloff in one of his earliest silent film roles (playing an Indian brave). Barbara Bedford later married her co-star in the film, Alan Roscoe in real life. The production was shot near Big Bear Lake and in Yosemite Valley.

The film was well received at the time of its release. [1] Film historian William K. Everson considers The Last of the Mohicans to be a masterpiece. [2] In 1995, this film was deemed "culturally significant" by the Library of Congress and selected for preservation in the United States National Film Registry. [3] [4]

In 1757, in the midst of the French and Indian War, three French divisions and their Huron Indian allies are advancing on Fort William Henry, a British stronghold south of Lake George in the colony of New York. Chingachgook sends his son Uncas, the last living warrior of the Mohican tribe, to warn the fort's commander, Colonel Munro, of the imminent danger. Uncas is admired by Munro's daughter Cora, much to the displeasure of her suitor, Captain Randolph.

Upon receiving Munro's plea for assistance, General Webb dispatches a relief force of 3000 men to Fort William Henry with the Munro sisters, but with the aid of an Indian runner named Magua, the sisters and Major Heyward take a shortcut through the wilderness. Magua, who is a Huron sympathizer, then pretends to lose his way. In the forest they encounter Uncas, Chingachgook and the hunter and scout Hawkeye, accompanied by an eccentric preacher named David Gamut. When Heyward asks for directions to Fort Edward, the men become suspicious of Magua who, like all Indians in the area, should have an intimate knowledge of the terrain. Their fears of treachery are confirmed when they discover that Magua has disappeared.

Uncas and Hawkeye conceal Heyward and the women in a cave, but Magua and his men find the hiding place, and after a fierce firefight the women are captured. Magua offers to spare "Golden Hair" (Alice) if Cora will become his squaw; but Uncas, Chingachgook and Hawkeye counterattack and rescue the hostages. Although they leave Magua for dead, he is actually uninjured.

The hostages and their rescuers arrive at Fort William Henry at the same time as the column of troops, but the situation is still dire. The only thing keeping the besiegers at bay is a formidable gun emplacement on the left rampart. The cowardly Captain Randolph informs Montcalm, the French commander, that the rampart guns are nonfunctional, leaving Munro no choice but to surrender the fort. Though promised safe passage for the women and children, the Hurons, under the influence of French-supplied whiskey, slaughter the civilians and torch the fort.

Magua kidnaps the Munro sisters for a second time and flees. Uncas and Hawkeye pursue him, but Magua reaches a neutral Delaware village. The dispute is taken before a Delaware council of three; their judgment is that Cora be released to Uncas, and that Alice remain with Magua. To save her sister, Cora offers to take her place. Uncas vows that Magua will not leave with his true love, but by Delaware law, Magua is protected until sundown.

That night, Cora escapes and is pursued by Magua to the edge of a precipice. She threatens to jump if he approaches, so Magua waits patiently for her to fall asleep. When she does, he grabs her arm. She flings herself off the cliff, but Magua still has hold of her arms. When Uncas appears, the situation is reversed: Cora tries to save herself, but Magua uses his knife to pry her fingers loose, and she falls to her death. In the ensuing fight, Magua stabs Uncas, whose body rolls down the embankment to rest near Cora's. Before dying, Uncas reaches forth and takes Cora's hand in his. Magua flees when Chingachgook and Hawkeye arrive, but Hawkeye shoots him dead.

At Cora and Uncas's burial ceremony, Munro laments the passing of his daughter and Chingachgook mourns for his son, the last of the Mohicans.

The Maurice Tourneur and Clarence Brown adaptation of James Fenimore Cooper’s 1826 historical novel retains its high stature among film historians and "still considered to be the best film adaption of Cooper’s novel.” [5] [6]

Film historian and biographer Charles Higham offered high praise for the directorial “sophistication” and “daring” in the development of the Cora Munro (Barbara Bedford) character:

“The Last of the Mohicans mood is darker, stranger than anything suggested by James Fenimore Cooper’s robust boy’s book. The darkness wells from the character of the older girl, Cora Munro, played by Barbara Bedford. Prim and proper in her demeanor, she is actually seized by virginal longings, consumed with sexual desire for her Indian guide-protector Uncas (Alan Roscoe). At a time when women in movies were supposed to be mere wilting violets, this explicit sexual frankness must have been an astonishment, and was in truth quite revolutionary. Looking into Miss Bedford’s sly animal eyes, looking at the movement of her mouth, we are already aware of the director’s sophisticated understanding of the medium’s potential for sexual expression. In 1920, this understanding, and the equivalent daring of the actress, whose performance is a triumph of subtle technique, were nothing short of miraculous.” [7]

Acknowledging the “strengths and weaknesses” evident in every cinematic treatment of the famous novel—adaptations of the novel appeared as early as 1911— including the George B. Seitz version in 1936 and the 1992 production by Michael Mann—film critic David Sterritt reports “that for pure visual storytelling and a memorably filmed climax, the silent movie by Tourneur and Brown has proven hard to beat.” [8]

The Last of the Mohicans: A Narrative of 1757 is a historical romance written by James Fenimore Cooper in 1826.

Magua is a fictional character and the main antagonist in the 1826 novel The Last of the Mohicans by James Fenimore Cooper. This historical novel is set at the time of the French and Indian War. A Huron Indian chief, he is also known by the French alias "Le Renard Subtil".

The Leatherstocking Tales is a series of five novels by American writer James Fenimore Cooper, set in the eighteenth-century era of development in the primarily former Iroquois areas in central New York. Each novel features Natty Bumppo, a frontiersman known to European-American settlers as "Leatherstocking", "The Pathfinder", and "the trapper". Native Americans call him "Deerslayer", "La Longue Carabine", and "Hawkeye".

The Last of the Mohicans is a 1992 American epic historical drama film set in 1757 during the French and Indian War. It was directed by Michael Mann and was based on the 1826 novel The Last of the Mohicans: A Narrative of 1757 by James Fenimore Cooper and the 1936 film adaptation, owing more to the film than the novel. The film stars Daniel Day-Lewis and Madeleine Stowe, with Jodhi May, Russell Means, Wes Studi, Eric Schweig, and Steven Waddington in supporting roles.

The capture and rescue of Jemima Boone and the Callaway girls is a famous incident in the colonial history of Kentucky. Three girls were captured by a Cherokee-Shawnee raiding party on July 14, 1776 and rescued three days later by Daniel Boone and his party, celebrated for their success. The incident was portrayed in 19th-century literature and paintings: James Fenimore Cooper created a fictionalized version of the episode in his novel The Last of the Mohicans (1826) and Charles Ferdinand Wimar painted The Abduction of Boone's Daughter by the Indians.

Lieutenant-Colonel George Monro (1700–1757) was a Scottish-Irish officer in the British Army. He is best remembered for his unsuccessful defense of Fort William Henry in 1757 during the French and Indian War. After surrendering with full honours of war to the French general Louis-Joseph de Montcalm, he and his troops were attacked by France's Native allies. The events of the siege were made famous by James Fenimore Cooper in his novel The Last of the Mohicans. 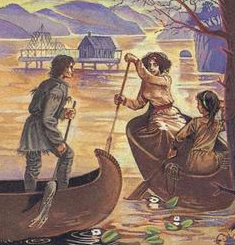 Nathaniel "Natty" Bumppo is a fictional character and the protagonist of James Fenimore Cooper's pentalogy of novels known as the Leatherstocking Tales.

The Deerslayer and Chingachgook is the feature-length first part of the two-part 1920 German silent Western film Lederstrumpf (Leatherstocking), directed by Arthur Wellin and featuring Bela Lugosi. It is based on the 1841 novel The Deerslayer by James Fenimore Cooper. The second part is called The Last of the Mohicans.

The Last of the Mohicans is the feature-length second part of the 1920 German silent Western film Lederstrumpf (Leatherstocking) directed by Arthur Wellin and featuring Bela Lugosi and Emil Mamalock. It is based on James Fenimore Cooper's 1826 novel of the same name. The first part is The Deerslayer and Chingachgook. A print of Lederstrumpf, in its heavily edited shortened U.S. version titled The Deerslayer, was discovered in the 1990s, but the original full-length German film is lost. Bela Lugosi played the Indian Chingachgook, one of his most unusual roles, and Emil Mamalock played Hawkeye, the Deerslayer.

The Last of the Mohicans is a 1971 BBC serial, based on the 1826 novel of the same name by James Fenimore Cooper, directed by David Maloney. 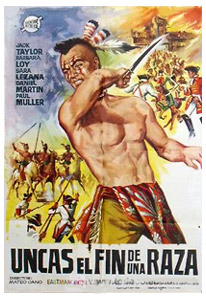 Fall of the Mohicans is a 1965 Spanish-Italian historical western adventure film directed by Mateo Cano and starring Jack Taylor, Paul Muller and Sara Lezana. The film is based on James Fenimore Cooper's 1826 novel The Last of the Mohicans, but made in the style of a Spaghetti Western. It was shot on location in the Tabernas Desert of Almería Another adaptation of the story The Last Tomahawk was released the same year by Germany's Constantin Film.

The Last of the Mohicans is a 1968 internationally co-produced Western film, co-directed by Jean Dréville, Pierre Gaspard-Huit and Sergiu Nicolaescu. It was the second episode of the European TV miniseries Leatherstocking Tales.

Last of the Redskins is a 1947 American Western film directed by George Sherman and starring Joh Hall and Michael O'Shea. The film was shot in Vitacolor but released in Cinecolor.

Last of the Mohicans is a 1977 American adventure drama television film based on the novel The Last of the Mohicans by James Fenimore Cooper. The film was directed by James L. Conway, written by Stephen Lord, and stars Steve Forrest, Ned Romero, Andrew Prine, Don Shanks, Michele Marsh, Jane Actman, and Robert Tessier. It was produced by Schick Sunn Classic Pictures as part of their Classics Illustrated series, and aired on NBC on November 23, 1977.

The Last Tomahawk or The Last of the Mohicans is a 1965 Western adventure film directed by Harald Reinl and starring Joachim Fuchsberger, Karin Dor and Marie France. It was a co-production between France, Spain and West Germany. It is loosely based on James Fenimore Cooper's 1826 novel The Last of the Mohicans, with the setting moved forward more than a century to the American West of the post-Civil War-era. Another version Fall of the Mohicans was made the same year.

The Last of the Mohicans: The Death of Cora, also known as Indian Sacrifice, is a c. 1827 painting by British-American painter Thomas Cole, the founder of the Hudson River School. The painting depicts the death of Cora from the 1826 American novel The Last of the Mohicans. It is one of four such paintings by Cole which depict scenes from the novel. The painting is currently owned by the University of Pennsylvania.

Wikisource has original text related to this article:
The Last of the Mohicans (1920 film)

Wikimedia Commons has media related to The Last of the Mohicans (1920 American film) .
This page is based on this Wikipedia article
Text is available under the CC BY-SA 4.0 license; additional terms may apply.
Images, videos and audio are available under their respective licenses.