Thomas Ryan Walkup (born December 30, 1992) is an American professional basketball player for Olympiacos of the Greek Basket League and the EuroLeague. He played college basketball for Stephen F. Austin State University. Walkup was named Southland Conference Player of the Year for two consecutive seasons (2015 and 2016). Before playing at the college level, he attended Deer Park High School in Deer Park, Texas. Walkup is a native of Pasadena, Texas.

Born in Pasadena, Texas, [1] Walkup attended Deer Park High School in nearby Deer Park. He was a point guard in his junior season for the varsity basketball team and averaged 10.1 points, 5.0 blocks, 4.6 assists, and 1.9 steals per game. [2] Walkup also earned all-district honors after helping the Deer finish the season with a 24–11 record. He also lifted them to a bi-district round victory at the Class 5A playoffs. As a senior, Walkup averaged 25.9 points and 8.9 rebounds with Deer Park. [2] In his years with the school, he faced two ACL injuries and a broken foot. [3] [4]

In November 2010, Walkup committed to play college basketball at Stephen F. Austin State University for the Lumberjacks. He chose the school because he aspired to compete in the NCAA Division I tournament and they ran a successful program. [4] Houston Baptist was the only other school that offered him a scholarship. [5] Walkup later said, "There was a reason I didn’t have any other scholarship offers besides those two—I wasn't any good." [5] His father commented on Walkup's recruitment, "I'm sure scouts looked at him and said, 'Well, he's a 6–4 white guy and he can't shoot and he plays the four. And we don't need that.'" [6]

Walkup immediately assumed a big role with the Lumberjacks as the team's sixth man during his freshman season. In 18.5 minutes per game, he averaged 4.4 points and 3.6 rebounds. He recorded a season-best 11 points twice, against Tulsa on November 24, 2012, and versus McNeese State on January 5, 2013. That season, the Lumberjacks won a school-record 27 games, winning their third Southland Conference title of all-time and qualifying for the National Invitation Tournament (NIT). [2]

As a junior at Stephen F. Austin, Walkup averaged 15.5 points and 6.5 rebounds per game. His teammates began referring to him as "The Snake", after establishing his ability for rebounds, consistently drawing fouls for opposing players, and providing scrappy defense for the Lumberjacks. He was named Southland Conference Player of the Year in 2015. [7]

After going undrafted in the 2016 NBA draft, Walkup joined the Golden State Warriors for the 2016 NBA Summer League. On September 26, 2016, he signed with the Chicago Bulls. [9] However, he was later waived by the Bulls on October 21 after appearing in four preseason games. [10] On October 30, he was acquired by the Windy City Bulls of the NBA Development League as an affiliate player of Chicago. [11]

On June 11, 2021, he officially signed a three-year contract with Greek club Olympiacos of the EuroLeague. [17]

Walkup was born on December 30, 1992, to Lisa and Raymond Walkup and was brought up in Pasadena, Texas. [6] He has an older brother named Nathan who played as a forward for the Texas A&M Aggies men's basketball team from the 2007–08 season to 2010–11 season. [4] Both players graduated at Deer Park High School and played under Coach Louis Means. Walkup has often been known for his beard, which drew the attention of several media outlets during the 2016 NCAA Tournament. [3] [5] [6] [18] Entering that year's tournament, he had not shaved since November 1, 2015. [6] Walkup claimed that he had been asked to shave it, but he felt that it fit in with Stephen F. Austin's mascot, the Lumberjacks. [3] His appearance has also been compared with Philadelphia Phillies baseball player Bryce Harper. He has also been nicknamed "Fresh Cut" by Barry Knight. [8] 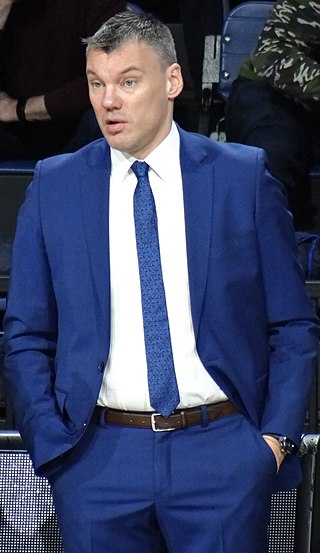 Šarūnas "Šaras" Jasikevičius is a Lithuanian professional basketball coach and former player. He currently serves as a head coach for FC Barcelona of the Liga ACB and the EuroLeague. During his playing career, standing at a height of 6 ft 4 in (1.93 m) tall, he played at the point guard position.

Lietuvos krepšinio lyga (LKL), also known as Betsafe LKL for sponsorship reasons, is the premier professional men's club basketball league in Lithuania. It is composed of 12 teams, and it is a member of the Lithuanian Basketball Federation. The best LKL clubs are also annual participants of the top European-wide basketball competitions, including the top-tier level EuroLeague. 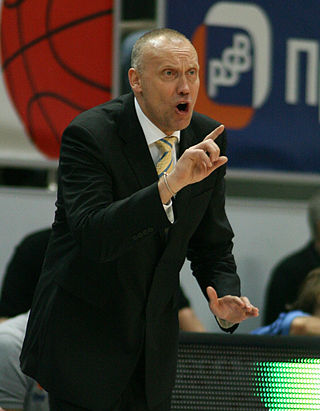 Rimas Kurtinaitis is a Lithuanian professional basketball coach, and a retired professional basketball player, who was a member of the senior Soviet and Lithuanian national basketball teams during his playing career. He won a gold medal at 1988 Olympics in South Korea. He recently worked as the head coach for Khimki. At a height of 1.96 m (6'5") tall, during his playing career, he played at the shooting guard position. He is the only non-NBA player to ever participate at the NBA All-Star Weekend's Three-Point Contest, doing so in 1989, where he scored 9 points.

Basketball Club Neptūnas, commonly known as Neptūnas or Neptūnas Klaipėda, is a Lithuanian professional basketball team based in Klaipėda, Lithuania. The club participates in the Lithuanian Basketball League and internationally in the Champions League. It was founded in 1962 under the name BC Maistas and in 1964, BC Maistas's name was changed to BC Neptūnas. The club carries the name of the Roman sea god Neptune. Neptūnas participated in the 2014–15 EuroLeague season and is only the third Lithuanian club to participate in the premier European basketball league, after Žalgiris and Rytas. 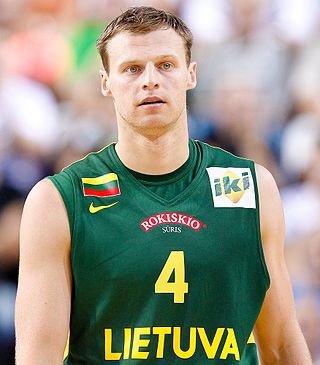 BC Prienai, also known by the sponsor name Labas Gas, is a professional basketball club based in Prienai, Lithuania. They play domestically in Lithuanian Basketball League every year. During the 2008–09 season, then called Rūdupis, they became the champion of the NKL and won the challenge match for a slot in the LKL. In their debut LKL season Rūdupis took seventh place, while next two seasons brought BC Prienai two bronze LKL medals. BC Prienai played in EuroCup 2011–12 with moderate success; the team won 3 games out of 6, but nonetheless failed to qualify for the next stage. More recently, the team has become a strong competitor in domestic tournaments, more than once upsetting teams such as Žalgiris Kaunas and Lietuvos rytas Vilnius. In December 2017, in a highly publicized move, Vytautas signed American basketball players and brothers LaMelo and LiAngelo Ball. 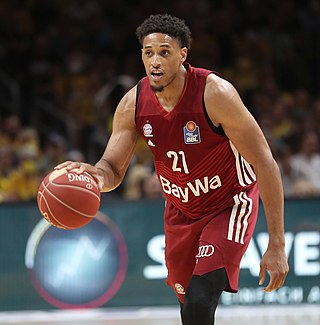 Augustine Cuero Rubit is an American professional basketball player for Bayern Munich of the Basketball Bundesliga (BBL) and the EuroLeague. He is a 2.03 m (6'8") tall power forward-center. He played college basketball at the University of South Alabama. Rubit was an All-American player at South Alabama, and was one of the nation's best rebounders. 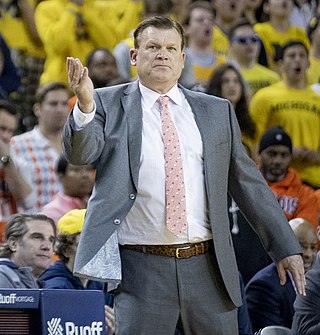 The 2015–16 Stephen F. Austin Lumberjacks basketball team represented Stephen F. Austin State University during the 2015–16 NCAA Division I men's basketball season. The Lumberjacks were led by head coach Brad Underwood and played their home games at the William R. Johnson Coliseum. They were members of the Southland Conference. The Lumberjacks finished the season with a record of 28–6, 18–0 in Southland play to win the regular season championship. They won the Southland tournament championship to earn the conference's automatic bid to the NCAA tournament. As a #14 seed, they upset #8 ranked West Virginia in the first round before losing in the final seconds to Notre Dame in the second round. 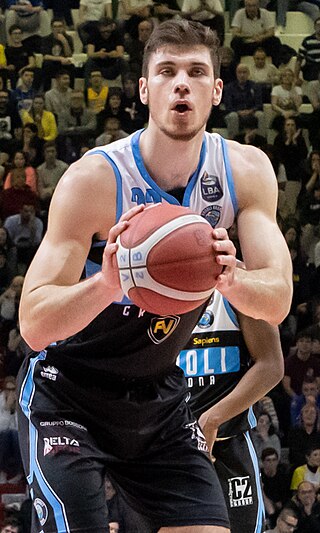 Ethan Happ is an American professional basketball player for Rio Breogán of the Spanish Liga ACB. He is the all-time leading rebounder for the Wisconsin Badgers, where he started all 139 games of his college career and is the school record holder in double-doubles and triple-doubles. Happ is one of just six players in NCAA history to record at least 2,000 points, 1,000 rebounds and 400 assists.

Donatas Sabeckis is a Lithuanian professional basketball player for BC Šiauliai of the Lithuanian Basketball League (LKL). He primarily plays as point guard, but can also play as shooting guard or small forward.

Martin Schiller is an Austrian professional basketball coach who most recently served as head coach of Casademont Zaragoza of the Liga ACB in Spain.

Rokas Jokubaitis is a Lithuanian professional basketball player for FC Barcelona of the Spanish Liga ACB and the EuroLeague.

Kevon Harris is an American professional basketball player for the Orlando Magic of the National Basketball Association (NBA) on a two-way contract with the Lakeland Magic of the NBA G League. Harris played college basketball at Stephen F. Austin.

Shannon Bogues is an American professional basketball player for Apollon Limassol B.C. of the Cyprus Basketball Division A. He played college basketball for the McLennan Highlanders and the Stephen F. Austin Lumberjacks.