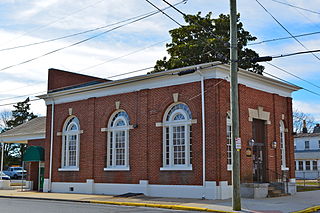 Frederica is a town in Kent County, Delaware, United States. It is part of the Dover, Delaware Metropolitan Statistical Area. The population was 774 at the 2010 census. ILC Dover, the company which manufactured the spacesuits for the Apollo and Skylab astronauts of the 1960s and 1970s, along with fabricating the suit component of the Space Shuttle's Extravehicular Mobility Unit (EMU), is located nearby.

Milford is a city in Kent and Sussex counties in the U.S. state of Delaware. According to the 2010 census, the population of the city is 9,559.

U.S. Route 113 (US 113) is a spur of US 13 in the U.S. states of Maryland and Delaware. The U.S. Highway runs 74.75 miles (120.30 km) from US 13 in Pocomoke City, Maryland north to Delaware Route 1 (DE 1) in Milford, Delaware. In conjunction with DE 1, US 113 is one of two major north–south highways on the Delmarva Peninsula that connect Dover with Pocomoke City and the Eastern Shore of Virginia. The U.S. Highway is the primary north–south highway in Worcester County, Maryland, where it connects Pocomoke City with Snow Hill and Berlin. US 113 is one of three major north–south highways in Sussex County, Delaware, where it connects Selbyville and Georgetown with Milford. While US 113 does not pass through Ocean City or the Delaware Beaches, the U.S. Highway intersects several highways that serve the Atlantic seaboard resorts, including US 50, Maryland Route 90 (MD 90), US 9, and DE 1. US 113 is a four-lane divided highway for its whole length except for between Snow Hill and Berlin, where it is a two-lane undivided road.

Delaware Route 1 (DE 1) is a 103.02-mile-long (165.79 km) state highway in the U.S. state of Delaware. The route runs from the Maryland border in Fenwick Island, Sussex County, where it continues south into that state as Maryland Route 528 (MD 528), north to an interchange with DE 58 in Christiana, New Castle County, where the road continues north as DE 7. Between Fenwick Island and Dover Air Force Base in Dover, Kent County, DE 1 is a four- to six-lane surface divided highway with occasional interchanges. The route heads north past the Delaware Beaches along the Atlantic Ocean before it runs northwest through rural areas, turning north at Milford to continue to Dover. Upon reaching Dover, DE 1 becomes the Korean War Veterans Memorial Highway, a four- to six-lane freeway that is tolled. Between Dover and Tybouts Corner, DE 1 parallels U.S. Route 13 (US 13), crossing over and featuring interchanges with it multiple times. Past Tybouts Corner, the freeway heads north to Christiana, reaching an interchange with Interstate 95 (I-95) a short distance before its terminus. DE 1 serves as the main north-south state route in Delaware, connecting the Delaware Beaches with the Dover and Wilmington areas.

Delaware Route 14 (DE 14) is a state highway in the southern part of Kent County, Delaware. The route runs from the Maryland border near Burrsville, Maryland, where it continues as Maryland Route 317 (MD 317), east to DE 1 in Milford. The route passes through Harrington, where it intersects U.S. Route 13 (US 13), and passes to the north of Houston before coming to Milford, where it intersects DE 15, US 113, and DE 1 Business. DE 14 has a truck bypass of Harrington known as DE 14 Truck.

Lincoln is a small unincorporated community in northern Sussex County, Delaware, United States. It is part of the Salisbury, Maryland-Delaware Metropolitan Statistical Area. The planner that originally laid out the town planned for it to become the county seat. Lincoln lies on U.S. Route 113 between Ellendale and Milford. The town was never incorporated, but streets were laid out and several businesses and residences came, surrounding the current Delmarva Central Railroad line. Lincoln was formerly the headquarters of the Delaware Coast Line Railroad.

Delaware Route 36 (DE 36) is a state highway in Sussex County, Delaware. It runs in a generally northeast–southwest direction from DE 404 in Scotts Corner to Slaughter Beach, a town along the Delaware Bay. The road runs through the northern portion of Sussex County, passing through rural areas along with Greenwood and Milford. The route intersects DE 16 and U.S. Route 13 (US 13) in Greenwood and US 113, DE 1 Business, and DE 1 in Milford. DE 36 was built as a state highway in stages during the 1920s and 1930s. The road was designated by 1938 from DE 16 east of Greenwood to Fort Saulsbury and was extended west to DE 404 by 1994.

Delaware Route 30 (DE 30) is a state highway in Sussex County, Delaware. The route runs from an intersection with Bi-State Boulevard a short distance west of U.S. Route 13 (US 13) between Laurel and Delmar to DE 1 Business southeast of Milford in the area of Lincoln and Cedar Creek. The road runs east to Gumboro, where it turns north on the Millsboro Highway to Millsboro. Along this road, DE 30 shares concurrencies with DE 26, DE 54, and DE 24. From Millsboro, the route passes through Gravel Hill and to the west of Milton before reaching Milford. DE 30 is signed as an east-west road from the southern terminus to the east end of the DE 24 concurrency in Millsboro and as a north-south road from that point until the northern terminus.

Delaware Route 15 (DE 15) is a state highway in the U.S. state of Delaware. The route runs from DE 14 west of Milford in Kent County to DE 71/DE 896 in Summit Bridge, New Castle County, just south of Summit Bridge over the Chesapeake & Delaware Canal. DE 15 winds a path through many rural sections of Delaware, turning along many different roads. Most of the route, with the exception of the southern part of the route from Milford to Canterbury, runs to the west of U.S. Route 13 (US 13). DE 15 runs through the western outskirts of several cities and towns, including Wyoming, Dover, Clayton, and Middletown. The route intersects DE 12 near Felton, US 13 in Canterbury, DE 10 near Camden, DE 8 in Dover, DE 42 in Seven Hickories, DE 300 and DE 6 in the Clayton area, DE 299 in Middletown, and DE 286 near Summit Bridge.

Naaman is an unincorporated community in New Castle County, Delaware, United States. Naaman is located at the intersection of Delaware Route 92 and Ridge Road northeast of Claymont. 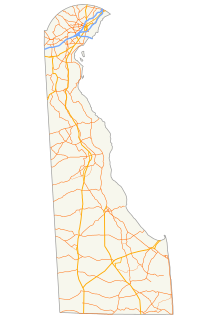 The Delaware State Route System consists of roads in the U.S. state of Delaware that are maintained by the Delaware Department of Transportation (DelDOT). The system includes the portions of the Interstate Highway System and United States Numbered Highways system located in the state along with state routes and other roads maintained by DelDOT. All roads maintained by the state are assigned a maintenance road number that is only marked on little white markers at intersections and on auxiliary plates below warning signs approaching intersections. These numbers are only unique in a specific county, some roads can be designated with multiple road numbers, and numbers do not necessarily correspond to the signed Interstate, U.S., or state route numbers. DelDOT maintains a total of 5,386.14 miles (8,668.15 km) of roads, comprising 89 percent of the roads within the state. Some large bridges in the state are maintained by other agencies including the U.S. Army Corps of Engineers and the Delaware River and Bay Authority. Roads in the system include multilane freeways, multilane surface divided highways, and two-lane undivided roads serving urban, suburban, and rural areas. Some of the roads maintained by DelDOT are toll roads, in which motorists must pay to use.

Armstrong is an unincorporated community in New Castle County, Delaware, United States. Armstrong is located at the intersection of Delaware Route 71 and Armstrong Corner Road/Marl Pit Road north of Middletown.

Porter is an unincorporated community in New Castle County, Delaware, United States. Porter is located at the intersection of Porter Road and Old Porter Road, southwest of Bear, and is the location of a junction between the Norfolk Southern Railway and the Delmarva Central Railroad.

Staytonville is an unincorporated community in Sussex County, Delaware, United States. Staytonville is located at the intersection of Delaware Route 36, Staytonville Road, and Memory Road northeast of Greenwood.