Thorley has a manor house called Torlei (meaning thorny lea) which was held by Earl Tostig in the time of Edward the Confessor. [1] It was originally governed by Earl Tostig during the reign of King Edward the Confessor from the manor house. [2] Following the Norman Invasion of England, it was granted by King William the Conqueror to Richard de Redvers, (purportedly) Earl of Devon. The Earls of Devon held the land until the Isle of Wight was surrendered back to the Crown under the reign of Edward I of England. [2] It was then granted to the Earls of Salisbury until it was confiscated by an Act of Attainder against John Montagu, 3rd Earl of Salisbury. Henry IV of England then granted it to George Plantagenet, 1st Duke of Clarence before it was returned to the Crown following an act of attainder. [2] In 1472, King Edward IV of England gave Thorley to Anthony Woodville, 2nd Earl Rivers for six years as compensation for harm done to his family by the Duke of Clarence. [3] Queen Elizabeth I then granted the parish out to a local farmer in exchange for annual rent, the farmer's daughter then sold it to Sir Robert Holmes, Governor of the Isle of Wight. [2] As of 1862, Thorley was retained to follow the ownership of Yarmouth, Isle of Wight. [4] Thorley has a cricket team. [5]

In the 13th century a church, dedicated to St Swithun, was built in the village and it was purportedly founded by Amicia, Countess of Devon. Later on it fell into disrepair and ruin; the remaining building and small graveyard are sited adjacent to Thorley Manor, on the B3401 road to Yarmouth . [3] [4] In 1871 a new church was built further east, nearer the village centre, and it remains the current parish church. In 1866 a National school was opened in the village for 60 pupils. [6] In 1912 the parish was recorded to comprise 1,580 acres (640 ha) of land. [7] 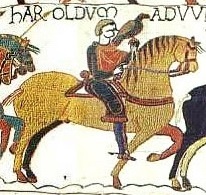 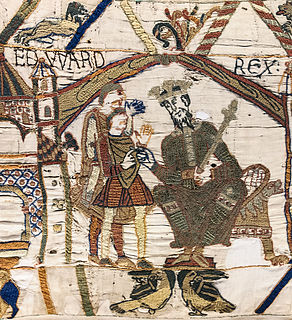 Baron Lisle was a title which was created five times in the Peerage of England during the Middle Ages and Tudor period. The earliest creation was in 1299 for John de L'Isle of Wootton on the Isle of Wight, then in the County of Southampton, now in Hampshire. The family's name in French was de l'Isle and was Latinised to de Insula. They were also known by the Latinised cognomen de Bosco referring to their "well-wooded" seat at Woodeton/Wodingtone. The family is assumed to have arrived in the Isle of Wight as a feudal follower of the Norman magnate Richard de Redvers (d.1107), Lord of the Isle of Wight and feudal baron of Plympton in Devon, and father of Baldwin de Redvers, 1st Earl of Devon. Below the de Redvers family that of de Lisle was the most important on the Island. John de Lisle, 2nd Baron Lisle (c.1281-1331) married Roesia de Cormeilles, daughter and heiress of Sir John de Cormeilles of Thruxton in Hampshire, which thenceforth became the de Lisle's principal seat. Bartholomew de Lisle, 3rd Baron Lisle (1308-1345) married Elizabeth de Courtenay, a daughter of Hugh de Courtenay, 1st/9th Earl of Devon (1276–1340), successor to de Redvers, although no longer Lord of the Isle of Wight, which was sold in 1293 to King Edward I by Isabel de Forz, daughter and heiress of the last de Redvers Earl. The arms of Lisle of Wootton were: Or, on a chief azure three lions rampant of the first, as is visible on the monumental brass in Thruxton Church of John de Lisle, 5th Baron Lisle (1366-1408), which also shows the arms of de Lisle impaling Courtenay, possibly for an unknown second wife of the 5th Baron, or possibly as a commemoration of the marriage of the 3rd Baron. The 5th Baron served twice as a Member of Parliament for Hampshire in 1401 and 1404. The last in the male line was John Lisle, 9th Baron Lisle, whose chest tomb and recumbent effigy survives in Thruxton Church in Hampshire.

Carisbrooke is a village on the south western outskirts of Newport, Isle of Wight and is best known as the site of Carisbrooke Castle. It also has a medieval parish church. St Mary's Church, began life as part of a Benedictine priory, established by French monks about 1150. The priory was dissolved by King Henry V of England in 1415 during the French Wars. Neglect over the centuries took its toll, but in 1907 the church was restored to its full glory. Its most striking feature is the 14th century tower, rising in five stages with a turret at one corner and a battlemented and pinnacled crown.

Calbourne is a village in the civil parish of Calbourne, Newtown and Porchfield, on the Isle of Wight, England. It is located 5 miles (8 km) from Newport in the west of the island. 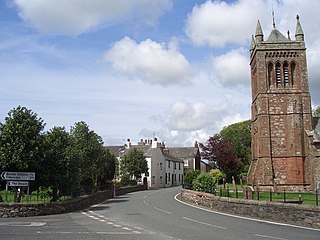 Bootle is a village and civil parish in the Borough of Copeland in Cumbria, England. The parish had a population of 745 in the 2001 census, decreasing slightly to 742 at the 2011 census. Historically in Cumberland, the village is in the Lake District National Park, and is close to the Irish Sea coast. Near to Bootle is the Eskmeals Firing Range, which was a large employer but in the mid to late 1990s reduced the workforce. Also within the parish is Hycemoor, a hamlet situated 1.2 miles (1.9 km) north-west of Bootle, where Bootle railway station is located.

Thorley is a village and civil parish in East Hertfordshire district of Hertfordshire, England. The parish includes the hamlets of Thorley Street, Thorley Wash and Old Thorley, and is bordered at the north by the market town of Bishop's Stortford.

Sway is a village and civil parish in Hampshire in the New Forest national park in England. The civil parish was formed in 1879, when lands were taken from the extensive parish of Boldre. The village has shops and pubs, and a railway station on the South Western Main Line from Weymouth and Bournemouth to Southampton and London Waterloo. It is the site of Sway Tower, a 66-metre (217 ft) concrete folly built in the 19th century.

Droxford is a village in Hampshire, England.

St Swithun's Church, Thorley is a parish church in the Church of England located in Thorley, Isle of Wight.

Carisbrooke Priory was an alien priory, a dependency of Lyre Abbey in Normandy. The priory was situated on rising ground on the outskirts of Carisbrooke close to Newport on the Isle of Wight.

Wroxall Manor was a manor house on the Isle of Wight, situated in the Newchurch parish.

Thorley Manor is a manor house just outside Yarmouth, on the Isle of Wight, England. Built in 1712, it features a modillion cornice, hipped roof, as well as tall chimneys.