Newport is the county town of the Isle of Wight, an island off the south coast of England. The town is in the civil parish of Newport and Carisbrooke, [2] [3] which had a population of 23,957 at the time of the 2001 census, rising to 25,496 at the 2011 census. [4] The town is slightly north of the centre of the island. It has a quay at the head of the navigable section of the River Medina, which flows northward to Cowes and the Solent.

Mousterian remains, featuring tools made by Neanderthals at least 40,000 years ago, were found at Great Pan Farm in the 1970s. [5]

There are signs of Roman settlement in the area, which was probably known as Medina. They include two known Roman villas, one of which, Newport Roman Villa, has been excavated and is open to the public. [6]

Information on the area resumes after the Norman Conquest. The first charter was granted in the late 12th century. In 1377 an invading French force burnt down much of the town while attempting to take Carisbrooke Castle, then under the command of Sir Hugh Tyrill. A group of Frenchmen were captured and killed, then buried in a tumulus later nicknamed Noddies Hill, a "noddy" being medieval slang for a body. This was later corrupted to Nodehill, the present name for a part of central Newport – a name confusing to many as the area is flat. [7]

In 1648 Charles I and a group of Parliamentary Commissioners concluded the Treaty of Newport, an attempt to reach a compromise in the Civil War that was undermined by Charles's negotiations with the French and Scots to intervene on his behalf. The Treaty was repudiated by Oliver Cromwell upon returning from defeating the Scots at the Battle of Preston. This led to Charles's execution.

The town had been incorporated as a borough in 1608. The town's position as an area of trade accessible to the sea meant it rapidly took over from nearby Carisbrooke as the main central settlement, eventually absorbing the latter as a suburb. The borough ceased to exist in 1974 when it was incorporated into the larger Borough of Medina, which was itself superseded in 1995 by a single unitary authority covering the whole of the Isle of Wight.

The Drill hall in Newport opened as the headquarters of the Isle of Wight Rifle Volunteers in 1860. [8]

Newport since the 1960s has acquired new shopping facilities and a pedestrianised central square. Through road traffic has ceased in many of the narrow streets. Newport Quay has been redeveloped with art galleries such as the Quay Arts Centre, and new flats converted from old warehouses.

Geographically located in the centre of the Isle of Wight, at 50.701°N, 1.2883°W, Newport is the principal town on the island. It has public transport connections with all the island's major towns. It serves as the island's main shopping centre and location for public services. The main A3020 and A3054 roads converge as Medina Way between the busy roundabouts at Coppins Bridge and St Mary's Hospital.

Newport railway station was the hub of the Island's rail network until the mid-20th century, but closed in 1966. The site is now occupied by the dual-carriageway A3020 Medina Way.

The nearest city to the town is Portsmouth, about 13 miles (21 km) north-east on Portsea Island, adjoining the mainland. More locally, Ryde, the island's largest town, is to the north-east. Sandown and Shanklin are to the east and Cowes to the north.

The River Medina runs through Newport. North of its confluence with the Lukely Brook at the town's quay, it becomes a navigable tidal estuary.

The town's suburb of Parkhurst houses two prisons: the notorious Parkhurst Prison and Albany. Together they make up HMP Isle of Wight, which is the largest prison in the UK. Parkhurst and Albany were once among the few top-security prisons in the United Kingdom. Camp Hill was another prison in the area, but it closed in 2013.

Seaclose Park in Newport, on the east bank of the River Medina, has since 2002 been the location for the revived Isle of Wight Music Festival, which is held once a year. Newport is home to the Postal Museum, possibly the largest private collection of vintage postal equipment and post boxes in the world. [10] [11]

Newport bus station is the town's central bus terminus. It acts as the hub of the Southern Vectis network, with routes from across the Island terminating there.

St George's Park is the home of Newport Football Club, the most successful of the Island's football teams, currently play in the Wessex League. The stadium has a capacity of 3,000. In 2018, an application was approved unanimously by the Isle of Wight council for a new stadium off the racecourse roundabout near Newport. This will be the new stadium for Newport (IW) F.C., so that St George's Park can be turned into an out-of-town retail area. The town is also represented by Newport Cricket Club, which plays at Victoria recreation ground. Its two teams compete in Harwoods Renault Divisions 1 and 2. The Isle of Wight County Cricket Ground is located at Newclose, on the outskirts of the town.

The town of Newport and the adjoining village of Carisbrooke together have seven primary schools, three secondary schools, a sixth-form campus, a further education college and two special schools. The primary schools located close to the town centre are Newport C of E Primary and Nine Acres Community Primary. Barton Primary is on Pan estate, while Summerfields Primary is nearby on the Staplers estate, both to the east of the town. Hunnyhill Primary is situated in Forest Road to the north of the town. There are two primary schools in Carisbrooke: Carisbrooke C of E Primary in Wellington Road and St Thomas of Canterbury Catholic Primary in the High Street, in the village centre.

The three secondary schools are Carisbrooke College, Medina College and Christ the King College. Carisbrooke College is located on a large site on the outskirts of Carisbrooke village, whilst Christ the King is just down the road, occupying two former middle school sites on opposite sides of Wellington Road. Medina College is situated to the east of the town, just off Fairlee Road, along with Medina Leisure Centre and Medina Theatre. The Island Innovation VI Form Campus is the joint sixth form for the Carisbrooke and Medina colleges. It is located in the town centre, on the site of the former Nodehill Middle School.

The Isle of Wight College stands to the north of the town centre, close to St Mary's Roundabout and the large industrial estate. Medina House School is located between Pan and Staplers, and St Georges School to the south of the town in the suburban Watergate Road.

From the Middle Ages the Parliamentary Borough of Newport had two seats in the House of Commons. Between 1807 and 1811 they were held by two future prime ministers: Arthur Wellesley, later to become the Duke of Wellington (who was also elected to two other seats at the same time) and Henry John Temple, 3rd Viscount Palmerston. Palmerston was eligible as an MP because his late father did not convert his Irish peerage into a United Kingdom peerage, which would have confined him to the House of Lords. The local patron arranging the deal was Sir Leonard Holmes, who made it a condition that they never visited the borough.

The borough was also represented by two other future prime ministers in the 1820s. George Canning was MP for Newport when appointed Prime Minister in 1827. However, under the law as it then stood, a minister accepting office automatically vacated his seat and had to stand for re-election to the Commons, and Canning chose to stand at Seaford, a government pocket borough in Sussex, rather than fight Newport again. However, in the by-election that followed at Newport, the town elected the Hon. William Lamb, later 2nd Viscount Melbourne, whose father had also represented the borough in the 1790s. However, Lamb remained MP for Newport for only two weeks, before also being elected for Bletchingley, which he preferred to represent.

Newport's representation in Parliament was cut to one seat in 1867 and abolished altogether as a separate constituency in 1885. It now belongs to the Isle of Wight constituency.

Newport has had a variety of local-government administrations. 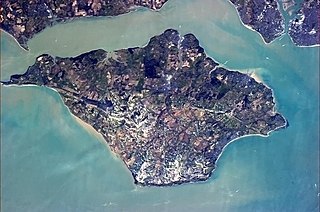 The Isle of Wight is a county and the largest and second-most populous island in England. It is in the English Channel, between 2 and 5 miles off the coast of Hampshire, separated by the Solent. The island has resorts that have been holiday destinations since Victorian times, and is known for its mild climate, coastal scenery, and verdant landscape of fields, downland and chines. The island is designated a UNESCO Biosphere Reserve.

The River Medina is the main river of the Isle of Wight, England, rising at St Catherine's Down near Blackgang and Chale, and flowing generally northwards through the capital Newport, towards the Solent at Cowes. The river is a navigable tidal estuary from Newport northwards, where it takes the form of a ria. 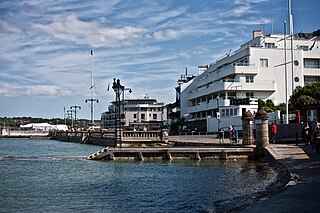 Cowes is an English seaport town and civil parish on the Isle of Wight. Cowes is located on the west bank of the estuary of the River Medina, facing the smaller town of East Cowes on the east bank. The two towns are linked by the Cowes Floating Bridge, a chain ferry.

Medina was a non-metropolitan district with the status of a borough on the Isle of Wight in England from 1974 to 1995.

East Cowes is a town and civil parish to the north of the Isle of Wight, on the east bank of the River Medina next to its neighbour on the west bank, Cowes. 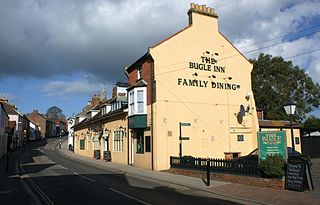 The ancient 'Kynges Towne' of Brading is the main town of the civil parish of the same name. The ecclesiastical parish of Brading used to cover about a tenth of the Isle of Wight. The civil parish now includes the town itself and Adgestone, Morton, Nunwell and other outlying areas between Ryde, St Helens, Bembridge, Sandown and Arreton. Alverstone was transferred to the Newchurch parish some thirty years ago. 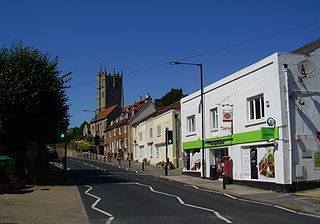 For other uses see of the name see Carisbrook

Medina College is a foundation secondary school in Newport on the Isle of Wight, formerly Medina High School.

Not to be confused with Wrightbus, the bus manufacturer

Barton is an area in the east of Newport on the Isle of Wight. Transport is provided by Southern Vectis community service route 39 to the town centre and standard service routes 8 and 9 to Sandown and Ryde, which run close by.

Gunville is a small settlement on the Isle of Wight, off the south coast of England. It largely comprises housing, although there are also a small number of shops, a couple of charity shops, some retail warehouses, a snooker hall, Methodist Church and a fishing lake. The settlement seems to date from some time after 1800, although the vast majority of the buildings currently standing in Gunville date from after 1900.

Carisbrooke College is a foundation trust-supported secondary school in Carisbrooke on the Isle of Wight, formerly Carisbrooke High School. Sixth form students are based at the Island Innovation 6th Form Campus, in Newport, a shared sixth form with Medina College.