Three Shakespeare Songs is a piece of classical choral music written for an a cappella SATB choir. It was written in 1951 by the British classical composer Ralph Vaughan Williams. The work comprises three short pieces which are settings of text from two plays by the English playwright William Shakespeare. It is published by Oxford University Press.

In 1951 the British Federation of Music Festivals (of which Vaughan Williams was president) held its annual National Competitive Festival during the Festival of Britain. The festival included a choral competition in which choirs from around the United Kingdom would demonstrate their technical abilities by performing test pieces. Vaughan Williams's associate composer, Cecil Armstrong Gibbs, tried to persuade him to compose a new test piece. Vaughan Williams was reluctant at first, and was of the opinion that the choirs should perform established test pieces rather than introducing a new composition. [1] Disappointed that Vaughan Williams had apparently failed to answer his letter, Armstrong Gibbs appeared to have given up on the idea:

Soon afterwards I was stricken down with some illness and was in bed when a fat envelope, registered and bearing the Dorking postmark, was brought up. Inside was the MS. (manuscript) of the Three Shakespeare Songs dedicated to me and the briefest of notes which ran: "Dear Armstrong. Here are three Shakespeare settings. Do what you like with them... Yours ever R.V.W."

The songs were premiered in the Royal Festival Hall on 23 June 1951, conducted by Armstrong Gibbs.

Stylistic comparisons have been made with Vaughan Williams's Sixth Symphony which was composed only four years earlier, notably of the second song, The Cloud-Capp'd Towers. Although the published version begins in the key of F# minor, the composer's original holograph was in E minor, which is also the key of the Sixth Symphony. The shifting between E minor and E♭ minor triads, as heard on the words "shall dissolve" has been compared to the conclusion of the Epilogue movement of the symphony. [2] Vaughan Williams himself later suggested that the meaning of the symphony's last movement could be summed up in the lines from The Tempest: "We are such stuff / As dreams are made on; and our little life / Is rounded with a sleep." [3]

The text of each song is derived from plays by William Shakespeare:

The first song is a setting of Ariel's Song to Ferdinand from The Tempest . It refers to Ferdinand's father — Alonso, King of Naples — who is presumed drowned in a shipwreck and whose body undergoes a magical transformation in the ocean depths. [4] The spirit Ariel sings this song to a prince of Naples. Prince Ferdinand falsely thinks his father is drowned in the ocean. [5]

Full fathom five thy father lies,Of his bones are coral made;Those are pearls that were his eyes:Nothing of him that doth fade,But doth suffer a sea-change Into something rich and strange.Sea-nymphs hourly ring his knell:Ding-dong.Hark! now I hear them, – ding-dong bell.

The second song also uses lines from The Tempest, spoken by the sorcerer Prospero to conclude the masque at the wedding of his daughter Miranda to Prince Ferdinand. The characters, Prospero announces, will all fade away, and this play within a play itself becomes a metaphor for the transience of real life, the globe symbolising both the World and the Globe Theatre in London. [6]

The cloud-capp'd towers, the gorgeous palaces,The solemn temples, the great globe itself,Yea, all which it inherit, shall dissolve,And, like this insubstantial pageant faded,Leave not a rack behind: We are such stuffAs dreams are made on, and our little lifeIs rounded with a sleep.

Over Hill, Over Dale

Text from A Midsummer Night's Dream forms the basis of the third song, the Fairy's Song to Puck. The furiously rhythmic verse evokes the mythology of Titania, the Fairy Queen. [7] 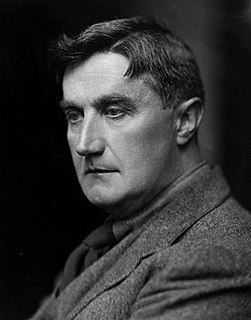 Ralph Vaughan Williams, was an English composer. His works include operas, ballets, chamber music, secular and religious vocal pieces and orchestral compositions including nine symphonies, written over sixty years. Strongly influenced by Tudor music and English folk-song, his output marked a decisive break in British music from its German-dominated style of the 19th century.

Caliban, son of the witch Sycorax, is an important character in William Shakespeare's play The Tempest.

Prospero's Books is a 1991 British avant-garde film adaptation of William Shakespeare's The Tempest, written and directed by Peter Greenaway. Sir John Gielgud plays Prospero, the protagonist who provides the off-screen narration and the voices to the other story characters. As noted by Peter Conrad in The New York Times on 17 November 1991, Greenaway intended the film “as an homage to the actor and to his "mastery of illusion." Sir John's Prospero is Shakespeare, and having rehearsed the action inside his head, speaking the lines of all the other characters, he concludes the film by sitting down to write The Tempest.”

Sea change or sea-change is an English idiomatic expression which denotes a substantial change in perspective, especially one which affects a group or society at large, on a particular issue. It is similar in usage and meaning to a paradigm shift, and may be viewed as a change to a society or community's zeitgeist, with regard to a specific issue. The phrase evolved from an older and more literal usage when the term referred to an actual "change wrought by the sea", a definition that remains in limited usage.

Serenade to Music is a work by Ralph Vaughan Williams for 16 vocal soloists and orchestra, composed in 1938. The text is an adaptation of the discussion about music and the music of the spheres in Act V, Scene 1 of The Merchant of Venice by William Shakespeare. Vaughan Williams later arranged the piece into versions for chorus and orchestra and for solo violin and orchestra. It is approximately 13 minutes in duration.

A Sea Symphony is a composition for orchestra and chorus by Ralph Vaughan Williams, written between 1903 and 1909. Vaughan Williams's first and longest symphony, it was first performed at the Leeds Festival in 1910, with the composer conducting. The symphony's maturity belies the composer's relative youth when it was written. One of the first symphonies in which a choir is used throughout the work and is an integral part of the musical texture, A Sea Symphony helped set the stage for a new era of symphonic and choral music in Britain during the first half of the 20th century. The work is sometimes referred to as the Symphony No. 1.

"Ariel's song" is a verse passage in Scene ii of Act I of William Shakespeare's The Tempest. It consists of two stanzas to be delivered by the spirit Ariel, in the hearing of Ferdinand. In performance it is sometimes sung and sometimes spoken. There is an extant musical setting of the second stanza by Shakespeare's contemporary Robert Johnson, which may have been used in the original production.

At two separate times, Felix Mendelssohn composed music for William Shakespeare's play A Midsummer Night's Dream. First in 1826, near the start of his career, he wrote a concert overture. Later, in 1842, only a few years before his death, he wrote incidental music for a production of the play, into which he incorporated the existing overture. The incidental music includes the famous Wedding March.

The Tempest is an opera by English composer Thomas Adès with a libretto in English by Meredith Oakes based on the play The Tempest by William Shakespeare.

The Tempest incidental music, Op. 1, is a set of movements for Shakespeare's play composed by Arthur Sullivan in 1861 and expanded in 1862. This was Sullivan's first major composition, and its success quickly brought him to the attention of the musical establishment in England. 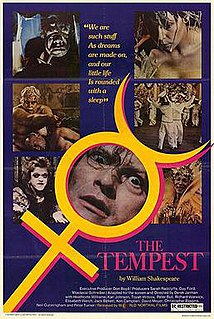 The Tempest is a 1979 film adaptation of William Shakespeare's play of the same name. Directed by Derek Jarman, produced by Don Boyd, with Heathcote Williams as Prospero, it also stars Toyah Willcox, Jack Birkett and Helen Wellington-Lloyd from Jarman's previous feature, Jubilee (1977), as well as his long-time cohort Karl Johnson. 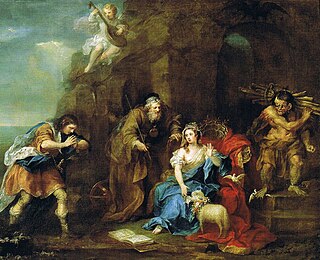 Ariel is a spirit who appears in William Shakespeare's play The Tempest. Ariel is bound to serve the magician Prospero, who rescued him from the tree in which he was imprisoned by Sycorax, the witch who previously inhabited the island. Prospero greets disobedience with a reminder that he saved Ariel from Sycorax's spell, and with promises to grant Ariel his freedom. Ariel is Prospero's eyes and ears throughout the play, using his magical abilities to cause the tempest in Act One which gives the play its name, and to foil other characters' plots to bring down their master.

As Dreams Are Made On is a 2004 short film written and directed by Gabriel Reid.

The Journey to Melonia is a 1989 Swedish animated fantasy adventure film directed by Per Åhlin, very loosely based on William Shakespeare's The Tempest. It was Per Åhlin's first fully animated feature film, since his earlier films Out of an Old Man's Head and Dunderklumpen! had both used a mix of animation and live action. The full English title is The Journey to Melonia: Fantasies of Shakespeare's 'The Tempest'.

The Tempest is a play by English playwright William Shakespeare, probably written in 1610–1611, and thought to be one of the last plays that Shakespeare wrote alone. After the first scene, which takes place on a ship at sea during a tempest, the rest of the story is set on a remote island, where the sorcerer Prospero, a complex and contradictory character, lives with his daughter Miranda, and his two servants: Caliban, a savage monster figure, and Ariel, an airy spirit. The play contains music and songs that evoke the spirit of enchantment on the island. It explores many themes, including magic, betrayal, revenge, and family. In Act IV, a wedding masque serves as a play-within-a-play, and contributes spectacle, allegory, and elevated language.

"Full fathom five" is a phrase deriving from a verse passage in The Tempest by William Shakespeare known as Ariel's Song. The spirit Ariel addresses Prince Ferdinand after a shipwreck to tell him about the supposed drowning of his father in water about 5 fathoms deep and the physical metamorphosis that follows.

The Tempest is a 1963 Australian television play, an adaptation of the play by William Shakespeare. Directed by Alan Burke, it stars Reg Livermore.