Thrinax excelsa, commonly known as broad thatch, is a species of palm which is endemic to Jamaica.

Thrinax excelsa is a fan palm with solitary stems that range from 3 to 11 metres (9.8 to 36.1 ft) tall and 12.5 to 20 centimetres (4.9 to 7.9 in) in diameter. Plants have between 6 and 17 palmately compound leaves with 52 to 65 leaflets. The inflorescences are arched and are not longer than the leaves. The bisexual flowers are small. The fruit are small, single-seeded, globose and white when mature. [1]

Juniperus excelsa, commonly called the Greek juniper, is a juniper found throughout the eastern Mediterranean, from northeastern Greece and southern Bulgaria across Turkey to Syria and Lebanon, Jordan and the Caucasus mountains.

Vallée de Mai Nature Reserve is a nature park and UNESCO World Heritage Site on the island of Praslin, Seychelles. It consists of a well-preserved palm forest, flagship species made up of the island endemic coco de mer, as well as five other endemic palms. The coco de mer, a monocot tree in the Arecaceae, has the largest seeds of any plant in the world. Also unique to the park is its wildlife, including birds such as the rare Seychelles black parrot, mammals, crustaceans, snails, and reptiles. There has been a determined effort to eliminate all the introduced exotic species of plants from the area but this has not been successful in eliminating coffee, pineapple, and ornamental palms thus far. This forest, with its peculiar plant and animal species, is a relict from the time when the supercontinent of Gondwana was divided into smaller parts, leaving the Seychelles islands between the present day Madagascar and India. 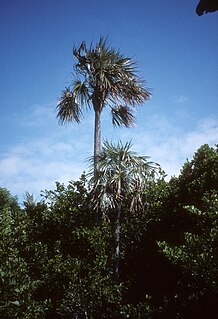 Bactris jamaicana is a spiny palm which grows in multi-stemmed clumps. It is endemic to Jamaica.

Roystonea altissima is a species of palm which is endemic to hillsides and mountain slopes near the interior of Jamaica. The name altissima is Latin for "highest", however they are not the tallest species in the genus Roystonea. They are usually found just over sea-level to 760 metres (2,490 ft) in elevation. 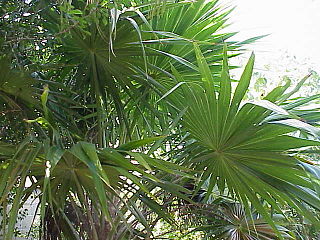 Attalea crassispatha is a palm which is endemic to southwest Haiti. The most geographically isolated member of the genus, it is considered a critically endangered species and has been called one of the rarest palms in the Americas. 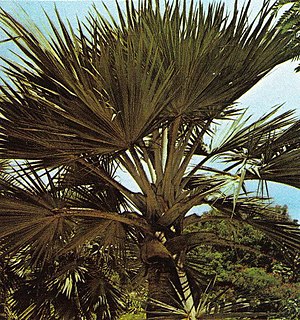 Phoenicophorium, the thief palm, or latanier palm, is a monotypic genus of flowering plant in the family Arecaceae. The sole species is Phoenicophorium borsigianum. 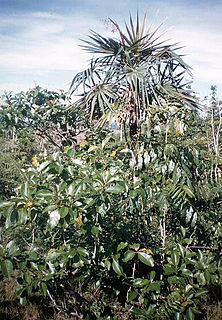 Coccothrinax clarensis is a palm which is endemic to central and eastern Cuba. Its name suggests that it has small coconut-like fruit while clarensis comes from Santa Clara valley in Cuba where the species are found.

Coccothrinax jamaicensis, the silver thatch or Jamaican silver thatch, is a fan palm believed to be endemic to Jamaica. A slender palm growing up to 8 metres (26 ft) tall, it grows in coastal areas on limestone or sand.

Coccothrinax pauciramosa, the yuraguana or yuraguana vestida, is a palm which is endemic to Cuba. Like other members of the genus, C. pauciramosa is a fan palm. Trees are single-stemmed, between 2 and 5 metres tall with stems 4 to 8 centimetres in diameter. The fruit is purple-black, 0.7–1.2 cm in diameter.

Roystonea princeps, commonly known as Morass cabbage palm or Morass royal palm, is a species of palm which is endemic to western Jamaica.

Sabal maritima, is a species of palm which is native to Jamaica and Cuba.

Thrinax parviflora is a palm which is endemic to the Blue Mountains of Jamaica where it occurs in open and rocky, seasonally dry open deciduous forest up to 900 meters elevation. Some botanists recognize two subspecies, one being Thrinax parviflora subsp. parviflora. 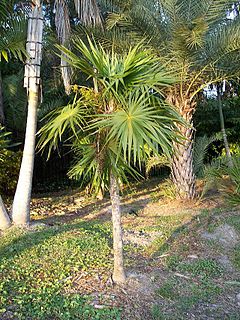 Hemithrinax compacta is a species of palm that is endemic to Cuba. Hemithrinax compacta flourishes on the mogotes of Cuba. Mogotes are dome-shaped hills in Cuba made up of coral rock. Hemithrinax compacta is the only species in its genus in Cuba that grows in the highlands, at an elevation of 450 metres (1,480 ft). Hemithrinax compacta needs to have more than 2,400 mm (94 in) per year of rainfall and a mean temperature of 22 degrees Celsius (72 °F). The leaves of the palm have an average length of 190 cm (75 in) and the inflorescence of the palm is tightly clustered, giving rise to the species name. A mature H. compacta can have a massive trunk of up to 10 cm (3.9 in) thick and more than 20 m (66 ft) in height. The genus Thrinax has been grown in gardens. In addition, in Thrinax the fruits are dispersed and eaten by red-bellied woodpeckers, birds, gray squirrels and lizards.