Thunder Bay Generating Station is a defunct biomass-fired thermal power station owned by Ontario Power Generation ("OPG"). It is located on Mission Island in Thunder Bay, on the shore of Lake Superior. [1]

Thunder Bay GS was in operation from 1963 to 2018. [2] It was the last coal fired station in Ontario. [3] The plant was initially shut down in April 2014 as part of Ontario's phase out of coal-fired electricity generation, [4] before being converted to run on advanced biomass (wood pellets) and recommissioned on February 9, 2015. [4]

Thunder Bay GS began operation in 1963, with one 100 MW coal-fuelled generating unit. Two additional coal-fuelled units were added in the early 1980s, and in 1984 the original 100 MW unit was removed from service. This plant is connected to the power grid via 115 kV and 230 kV transmission lines. The station occupies 53 ha (131 acres) on Mission Island, at the mouth of the Kaministiquia River delta on Thunder Bay. The plant's main chimney was 198 m (650 ft) tall. [5] The stack was demolished on September 9, 2021. [6]

The two coal-fuelled boilers provided a peak output of 326 MW fuelled by low-sulphur lignite coal from the Ravenscrag Formation in Southern Saskatchewan [7] and low-sulphur sub-bituminous coal from the Powder River Basin in the United States. [5]

While operating as a coal plant, annual production was approximately 1.5 billion kilowatt-hours (kWh), enough energy to supply over 100,000 households for one year.

There were multiple announcements on the future of Thunder Bay GS over a 10-year period. The Ontario government initially proposed a conversion to natural gas in 2004 but subsequently cancelled that plan in 2006. [8]

Then, as part of the 2010 Long-Term Energy Plan, Ontario's Ministry of Energy announced that Thunder Bay GS would be converted from coal to natural gas by the end of 2014. This was part of the Ontario government's commitment to phase out all of its coal-burning power generation. [9]

On 1 November 2012, OPG announced that the Ontario Power Authority requested that the conversion to natural gas be suspended until the Ontario Power Authority could assess generating needs in northwestern Ontario. [10] The next announcement on the generating station's fate was made in November 2013 when the Ministry of Energy announced that Thunder Bay GS would be converted to advanced biomass. [4]

Ontario’s Minister of Energy Bob Chiarelli outlined the broad terms of the conversion in a directive to the Ontario Power Authority dated 16 December 2013. [11] Chiarelli noted that the station will have only one unit operating as a peaking plant and that OPG is only permitted to purchase 15,000 tonnes of fuel annually. It was estimated that the 15,000 tonnes of fuel will permit the single unit to operate at 2% of capacity. [12] The generating station will have a five-year contract to produce electricity starting in January 2015. [13]

As of 2015 [update] , the plant burns steam treated wood pellets (biocoal) from Arbaflame in Norway. [14]

On July 27, 2018 OPG and IESO announced the closure of Thunder Bay Generating Station due to having a leak in the boiler causing the station to be shut down since May. Estimated repair costs would be about $5 million and the contract expiration in 2020 was not intended to be renewed. [15] [16]

In 2021 demolition began on the generation station by Hamilton-based company, Budget Demolition. The work is expected to take two to three years and the majority of the materials will be recycled. [17] The 650-foot chimney came down in a controlled demolition on 9 September 2021 and was captured on video on YouTube.

The Thunder Bay Generating Station ranked within the top 200 facility emitters, according to Environment Canada. [19]

*Calculated figures for CO2e are rounded to the nearest tonne. 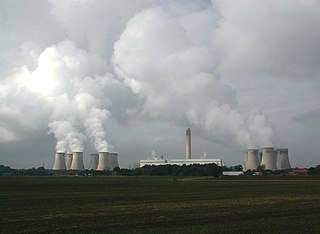 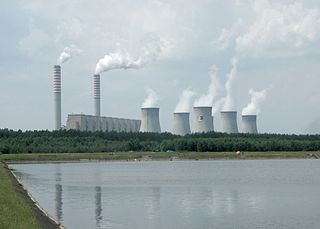 A fossil fuel power station is a thermal power station which burns a fossil fuel, such as coal or natural gas, to produce electricity. Fossil fuel power stations have machinery to convert the heat energy of combustion into mechanical energy, which then operates an electrical generator. The prime mover may be a steam turbine, a gas turbine or, in small plants, a reciprocating gas engine. All plants use the energy extracted from the expansion of a hot gas, either steam or combustion gases. Although different energy conversion methods exist, all thermal power station conversion methods have their efficiency limited by the Carnot efficiency and therefore produce waste heat. 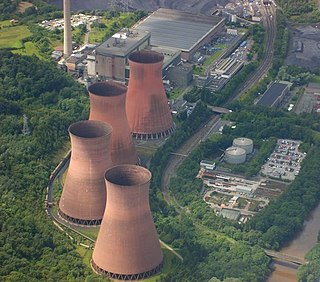 The Ironbridge power stations refers to a series of two power stations that occupied a site on the banks of the River Severn at Buildwas in Shropshire, England. The Ironbridge B Power Station was operated by E.ON UK but the site is now owned by Haworth Group. The station stands near the Ironbridge Gorge World Heritage Site. Originally powered by coal, they were converted to use 100% biomass fuel. Ironbridge B Power Station stopped generating electricity on 20 November 2015, with the decommissioning process continuing into 2017. The main phase of the 27-month demolition process began at 11:00 GMT on 6 December 2019, commencing with the four cooling towers.

Atikokan is a town in the Rainy River District in Northwestern Ontario, Canada. The population was 2,642 as of the 2021 census. The town is one of the main entry points into Quetico Provincial Park and promotes itself as the "Canoeing Capital of Canada". Atikokan was originally established as a Divisional Point for the Canadian Northern Railway. 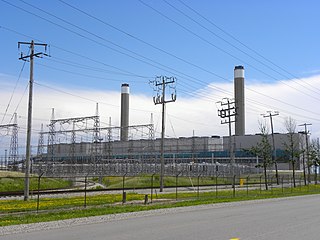 Rentech, Inc. was a Los Angeles, California, based United States company that owned and operated wood fiber processing and nitrogen fertilizer manufacturing businesses. It provided wood chipping and wood pellet services through a subsidiary Fulghum Fibres, Inc. and sold nitrogen fertilizer through Rentech Nitrogen Partners, L.P. In addition, Rentech owned the intellectual property for a number of energy technologies, such as Rentech–SilvaGas Gasification Process and Fischer–Tropsch process based Rentech Process.

Drax Group PLC is a power generation business. The principal downstream enterprises are based in the UK and include Drax Power Limited, which runs a biomass and coal fueled power station, Drax power station, near Selby in North Yorkshire. The Group also runs an international biomass supply chain business. The company is listed on the London Stock Exchange and is a constituent of the FTSE 250 Index.

The energy policy of India is to increase energy in India and reduce energy poverty, with more focus on developing alternative sources of energy, particularly nuclear, solar and wind energy. India attained 63% overall energy self-sufficiency in 2017.

The electricity policy of Ontario refers to plans, legislation, incentives, guidelines, and policy processes put in place by the Government of the Province of Ontario, Canada, to address issues of electricity production, distribution, and consumption. Policymaking in the electricity sector involves economic, social, and environmental considerations. Ontario's electricity supply outlook is projected to deteriorate in the near future due to increasing demand, aging electricity supply infrastructure, and political commitments, particularly the phase-out of coal-fired generation. Policymakers are presented with a range of policy choices in addressing the situation, both in terms of overall system design and structure, and specific electricity generating technologies. 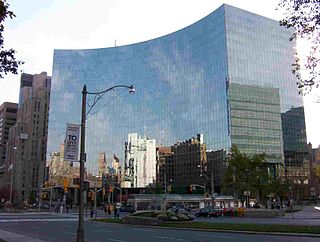 Ontario Power Generation Inc. (OPG) is a Crown corporation and "government business enterprise" that is responsible for approximately half of the electricity generation in the province of Ontario, Canada. It is wholly owned by the government of Ontario. Sources of electricity include nuclear, hydroelectric, wind, gas and biomass. Although Ontario has an open electricity market, the provincial government, as OPG's sole shareholder, regulates the price the company receives for its electricity to be less than the market average, in an attempt to stabilize prices. Since 1 April 2008, the company's rates have been regulated by the Ontario Energy Board.

Coal reserves in Canada rank 13th largest in the world at approximately 10 billion tons, 0.6% of the world total. This represents more energy than all of the oil and gas in the country combined. The coal industry generates CDN$5 billion annually. Most of Canada's coal mining occurs in the West of the country. British Columbia operates 9 coal mines, Alberta nine, Saskatchewan three and New Brunswick one. Nova Scotia operates several small-scale mines, Westray having closed following the 1992 disaster there. 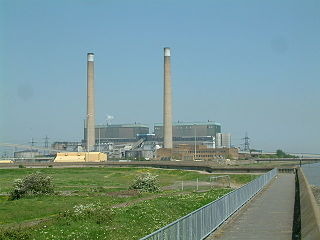 The Tilbury power stations were two thermal power stations on the north bank of the River Thames at Tilbury in Essex. The 360 MW dual coal- and oil-fired Tilbury A Power Station operated from 1956 until 1981 when it was mothballed, prior to demolition in 1999. The 1,428 MW Tilbury B Power Station operated between 1968 and 2013 and was fueled by coal, as well as co-firing with oil and, from 2011, biomass. Tilbury B was demolished in 2016–19. Since 2013 three other power stations have been proposed or constructed in Tilbury. 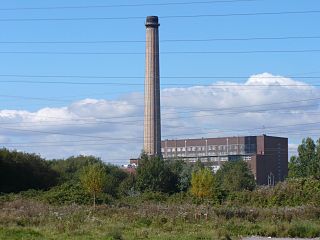 The Uskmouth power stations refers to a series of two coal-fired power stations at the mouth of the River Usk in the south-east of Newport, Wales. The first of the two station, Uskmouth A power station, was built in the 1940s and demolished in 2002. 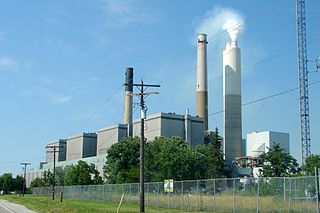 The Lambton Generating Station was a coal-fuelled power plant located on the St. Clair River near Corunna, Ontario, delivering up to 950 MW of power to the grid. It is owned by Ontario Power Generation. 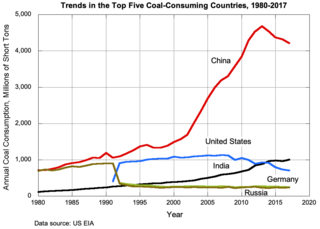 Coal phase-out is an environmental policy intended to stop using the combustion of coal in coal-burning power plants, and is part of fossil fuel phase-out. Coal is the most carbon-intensive fossil fuel, therefore phasing it out is critical to limiting climate change and keeping global warming to 1.5 °C as laid out in the Paris Climate Agreement. The International Energy Agency (IEA) estimates that coal is responsible for over 30% of the global average temperature increase above pre-industrial levels.

Denmark is a leading country in wind energy production and wind turbine production. Wind power alone produced 47% of Denmark's electricity consumption in 2017, and is expected to increase its production by nearly 80% in the years to 2024.

The Nanticoke Solar Facility is a 44 MW solar power station in Nanticoke, Ontario, Canada. It is located on the site of the defunct Nanticoke Generating Station, which operated from 1972 to 2013 and was the largest coal-fired power plant in North America.

Wikimedia Commons has media related to Thunder Bay Generating Station .
This page is based on this Wikipedia article
Text is available under the CC BY-SA 4.0 license; additional terms may apply.
Images, videos and audio are available under their respective licenses.