Thyroid neoplasm is a neoplasm or tumor of the thyroid. It can be a benign tumor such as thyroid adenoma, [1] or it can be a malignant neoplasm (thyroid cancer), such as papillary, follicular, medullary or anaplastic thyroid cancer. [2] Most patients are 25 to 65 years of age when first diagnosed; women are more affected than men. [2] [3] The estimated number of new cases of thyroid cancer in the United States in 2010 is 44,670 compared to only 1,690 deaths. [4] Of all thyroid nodules discovered, only about 5 percent are cancerous, and under 3 percent of those result in fatalities.

The first step in diagnosing a thyroid neoplasm is a physical exam of the neck area. If any abnormalities exist, a doctor needs to be consulted. A family doctor may conduct blood tests, an ultrasound, and nuclear scan as steps to a diagnosis. The results from these tests are then read by an endocrinologist who will determine what problems the thyroid has. Hyperthyroidism and hypothyroidism are two conditions that often arise from an abnormally functioning thyroid gland. These occur when the thyroid is producing too much or too little thyroid hormone respectively. [4]

Thyroid nodules are a major presentation of thyroid neoplasms, and are diagnosed by ultrasound guided fine needle aspiration (USG/FNA) or frequently by thyroidectomy (surgical removal and subsequent histological examination). FNA is the most cost-effective and accurate method of obtaining a biopsy sample. [5] As thyroid cancer can take up iodine, radioactive iodine is commonly used to treat thyroid carcinomas, followed by TSH suppression by high-dose thyroxine therapy.[ citation needed ]

Nodules are of particular concern when they are found in those under the age of 20. The presentation of benign nodules at this age is less likely, and thus the potential for malignancy is far greater.[ citation needed ]

Thyroid neoplasm might be classified as benign or malignant.[ citation needed ]

Thyroid adenoma is a benign neoplasm of the thyroid. Thyroid nodules are very common and around 80 percent of adults will have at least one by the time they reach 70 years of age. Approximately 90 to 95 percent of all nodules are found to be benign. [4]

Thyroid cancers are mainly papillary, follicular, medullary or anaplastic thyroid cancer. [2] Most patients are 25 to 65 years of age when first diagnosed; women are more affected than men. [2] [3] Nearly 80 percent of thyroid cancer is papillary and about 15 percent is follicular; both types grow slowly and can be cured if caught early. Medullary thyroid cancer makes up about 3 percent of this cancer. It grows slowly and can be controlled if caught early. Anaplastic is the most deadly and makes up around 2 percent. This type grows quickly and is hard to control. [4] The classification is determined by looking at the sample of cells under a microscope and determining the type of thyroid cell that is present. Other thyroid malignancies include thyroid lymphoma, various types of thyroid sarcoma, smooth muscle tumors, teratoma, squamous cell thyroid carcinoma and other rare types of tumors. [6]

Treatment of a thyroid nodule depends on many things including size of the nodule, age of the patient, the type of thyroid cancer, and whether or not it has spread to other tissues in the body. If the nodule is benign, patients may receive thyroxine therapy to suppress thyroid-stimulating hormone and should be reevaluated in six months. [2] However, if the benign nodule is inhibiting the patient's normal functions of life; such as breathing, speaking, or swallowing, the thyroid may need to be removed.[ citation needed ] Sometimes only part of the thyroid is removed in an attempt to avoid causing hypothyroidism. There is still a risk of hypothyroidism though, as the remaining thyroid tissue may not be able to produce enough hormones in the long-run.[ citation needed ]

If the nodule is malignant or has indeterminate cytologic features, it may require surgery. [2] A thyroidectomy is a medium-risk surgery that can result in complications if not performed correctly. Problems with the voice, nerve or muscular damage, or bleeding from a lacerated blood vessel are rare but serious complications that may occur. After removing the thyroid, the patient must be supplied with a replacement hormone for the rest of their life. This is commonly a daily oral medication prescribed by their endocrinologist.[ citation needed ]

Radioactive iodine-131 is used in patients with papillary or follicular thyroid cancer for ablation of residual thyroid tissue after surgery and for the treatment of thyroid cancer. Patients with medullary, anaplastic, and most Hurthle cell cancers do not benefit from this therapy. [2] External irradiation may be used when the cancer is unresectable, when it recurs after resection, or to relieve pain from bone metastasis. [2] 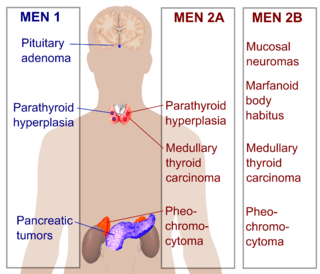 Multiple endocrine neoplasia is a condition which encompasses several distinct syndromes featuring tumors of endocrine glands, each with its own characteristic pattern. In some cases, the tumors are malignant, in others, benign. Benign or malignant tumors of nonendocrine tissues occur as components of some of these tumor syndromes. 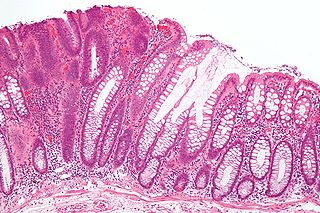 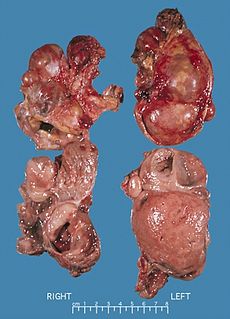 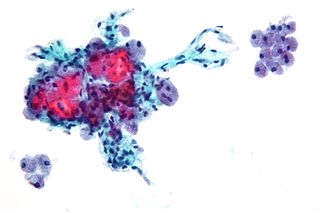 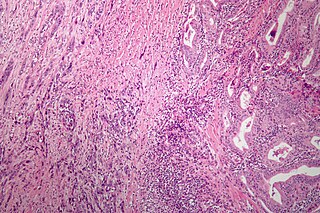 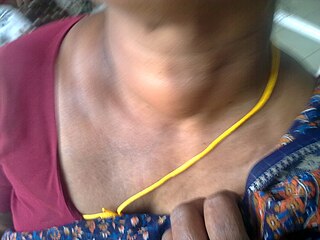 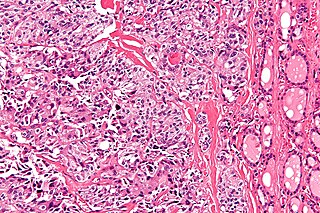 Squamous-cell carcinomas (SCCs), also known as epidermoid carcinomas, comprise a number of different types of cancer that result from squamous cells. These cells form on the surface of the skin, on the lining of hollow organs in the body, and on the lining of the respiratory and digestive tracts.

Dr. Yuri Nikiforov is an American scientist who revolutionized the understanding of thyroid cancer, most recently winning a two-year battle in which the World Health Organization has agreed in 2017 to reclassify non-invasive thyroid tumors to non-cancerogenic liaisons. Those tumors typically have some, but not all, characteristics of cancer. The WHO has agreed to change the term for the tumors from Encapsulated Follicular Variant of Papillary Thyroid Carcinoma to Noninvasive Follicular Thyroid Neoplasm With Papillary-like Nuclear Features, or NIFTP. About 45,000 people a year are diagnosed with NIFTP in the world. The decision led to a change in protocol of medical treatment, which no longer required removal of the whole thyroid gland from such patients as well as ended the use of radioactive iodine, extending their life expectancy and quality of life. The patients still undergo surgery, in which their thyroid tumors are removed, typically with half, but not all, of the thyroid gland.