Tichenor is an unincorporated community located in McLean County, Kentucky, United States. This small settlement is located at the intersection of U.S. Route 431 and Kentucky Route 250. Tichenor is also home to Buck Creek Baptist Church, one of the most notable churches in the county. 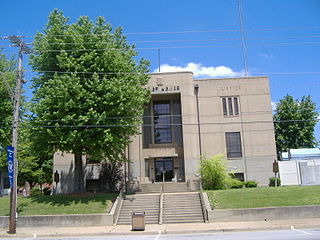 Ohio County is a county located in the U.S. state of Kentucky. As of the 2010 census, the population was 23,842. Its county seat is Hartford. The county is named after the Ohio River, which originally formed its northern boundary. It is a moist county, which means that the sale of alcohol is only legal within certain city limits.

Johnson County is a county located in the U.S. state of Kentucky. As of the 2010 census, the population was 23,356. Its county seat is Paintsville. The county was formed in 1843 and named for Richard Mentor Johnson, War of 1812 general, United States Representative, Senator, and Vice President of the United States. Johnson County is classified as a moist county, which is a county in which alcohol sales are not allowed, but containing a "wet" city, in this case Paintsville, where alcoholic beverage sales are allowed.

Boyle County is a county located in the U.S. state of Kentucky. As of the 2010 census, the population was 28,432. Its county seat is Danville. The county was formed in 1842 and named for John Boyle (1774–1835), a U.S. Representative, chief justice of the Kentucky Court of Appeals and later federal judge for the District of Kentucky. 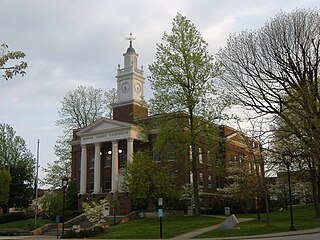 Barren County is a county located in the U.S. state of Kentucky. As of the 2010 census, the population was 42,173. Its county seat is Glasgow. The county was founded on December 20, 1798, from parts of Warren and Green Counties. It was named for the Barrens, meadow lands that cover the northern third, though actually the soil is fertile. 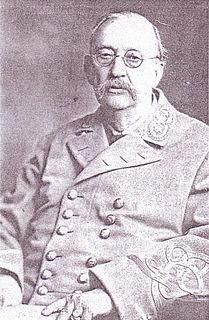 George Humphrey Tichenor was a Kentucky-born physician who introduced antiseptic surgery while in the service of the Confederate States of America. Thereafter, in private practice in Canton, Mississippi, he developed the formula that became "Dr. Tichenor's Antiseptic." 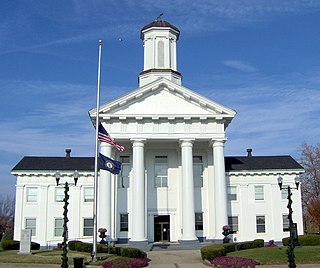 Richmond is a home rule-class city in and the county seat of Madison County, Kentucky, United States. It is named after Richmond, Virginia, and is the home of Eastern Kentucky University. The population was 35,894 in 2018. Richmond is the third-largest city in the Bluegrass region and the state's sixth-largest city. It is the eighth largest population center in Kentucky, when including metropolitan areas. Richmond serves as the center for work and shopping for south-central Kentucky. Richmond is the principal city of the Richmond–Berea Micropolitan Statistical Area, which includes all of Madison and Rockcastle counties.

Kentucky Route 80 (KY 80) is a 483.55-mile-long (778.20 km) state highway in the southern part of the U.S. state of Kentucky. The route originates on the state's western border at Columbus in Hickman County, and stretches across the southern portion of the state, terminating southeast of Elkhorn City on the Virginia state line. It is the longest Kentucky State Highway, though the official distance as listed in route logs is much less due to multiple concurrencies with U.S. Route 68 (US 68) and U.S. Route 23.

Hebron is an unincorporated community and census-designated place (CDP) in Boone County, Kentucky, United States. The city is named after the Biblical city of Hebron. As of the 2010 census, it had a population of 5,929. It is home to the Cincinnati/Northern Kentucky International Airport, which serves Cincinnati and the Tri-State (Ohio-Kentucky-Indiana) area.

Yelvington is a small unincorporated community in the U.S. state of Kentucky, located approximately 12 miles east of Owensboro along U.S. Route 60 east and near the Daviess-Hancock county line.

Isaac Taylor Tichenor was President of the Agricultural and Mechanical College of Alabama, now known as Auburn University, from 1872 to 1881.

Kavanaugh, Kentucky is an unincorporated community located in Boyd County, Kentucky, located along U.S. Route 23 directly north of the Lawrence County line. In 1984, the original alignment of U.S. 23 was replaced with a modern four-lane highway. CSX Transportation's Big Sandy Subdivision railroad tracks pass through the community. The railroad was formerly operated by the Chessie System and its predecessor the Chesapeake and Ohio Railway Company.

Cleopatra is an unincorporated community located in McLean County, Kentucky, United States. It was also known as Tichenors Store. Thomas Cicero (T.C.) Tichenor established a store in 1867. Cleopatra was incorporated by the Commonwealth of Kentucky in 1862. The boundaries of the town were defined as half a mile in each of four directions from a stone in front of Tichenors Store. The 1884 edition of the Kentucky State Gazetteer and Business Directory describes Cleopatra as having a population of 50 with semi-weekly mail service. Tichenor served as the postmaster. Other enterprises listed include M.D. Bandy, blacksmith; Reverend J. A. Brooks ; A B. Hadon, grocer; J.F. McGuin, carpenter; G.W. Moseley, flour mill; Sherwood Massey, coal miner; C.R. Robertson, physician and W.K. Robertson, pharmacist. Tichenors store is described as a dry goods store. Tichenor eventually sold his store to a brother-in-law, James Fincastle "Fin" Short who eventually sold to Courtland Lee (C.L.) Short. The building burned in 1918. In 1923, Mr. and Mrs. W. E. Leachman converted a lodge hall into a store.

Peach Grove is an unincorporated community in Pendleton County, Kentucky, United States. Peach Grove is located at the junction of Kentucky Route 10 and Kentucky Route 154 in northeastern Pendleton County, 10.3 miles (16.6 km) south-southeast of Alexandria. Immaculate Conception Catholic Church and Cemetery, which is listed on the National Register of Historic Places, is located in Peach Grove.

Fairview is a small census-designated place on the boundary between Christian and Todd counties in the western part of the U.S. state of Kentucky. As of the 2010 census, it had a population of 286, with 186 living in Christian County and 100 living in Todd County. It is chiefly notable as the birthplace of Jefferson Davis, later President of the Confederate States of America, and as the location of the Jefferson Davis State Historic Site. 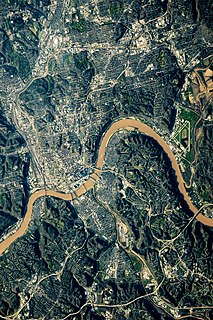