Last updated August 16, 2020
‹ The template Infobox settlement is being considered for merging. ›
Place in Batna, Algeria

Tigherghar is a town in north-eastern Algeria.

The Rizal Shrine in Intramuros is a museum dedicated to the lifework of José Rizal. It is located on Santa Clara Street, Fort Santiago, Intramuros, Manila, Philippines. Fort Santiago served as barracks for Spanish artillery soldiers during Spain's colonization of the islands. The museum is located in the building where Rizal spent his final night and hid his famous poem Mi último adiós in an oil lamp later given to his sister, Trinidad. The shrine is home to various memorabilia such as the shells he collected in Dapitan, books, manuscripts and artwork. 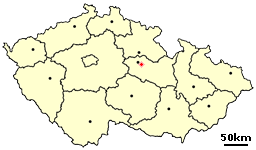 Čankovice is a village in the Pardubice Region of the Czech Republic. It has around 330 inhabitants. 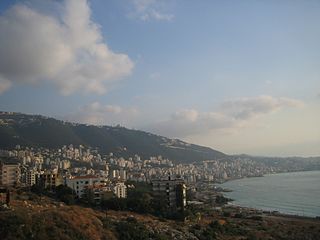 Keserwan District is a district (qadaa) in the Mount Lebanon Governorate, Lebanon, to the northeast of Lebanon's capital Beirut. The capital, Jounieh, is overwhelmingly Maronite Christian. The area is home to the Jabal Moussa Biosphere Reserve.

WITA is a Christian radio station located in Knoxville, Tennessee. It broadcasts a Christian format with some conservative talk shows and news from the USA Radio Network.

Bab al-Maqam is one of the Gates of Aleppo. The 13th century structure was built by al-Aziz Muhammad. Deviations in its design from the majority of medieval Syrian gates suggest that its function was ceremonial rather than military. In Constructions of Power and Piety in Medieval Aleppo (1997), Yasser Tabbaa details some of these differences, noting that they reinforce the possibility that the gate had primarily a religious and political function, serving as homage to Abraham and contrasting with the eastern shrines of Mashhad al-Dikka and Mashhad al-Husayn.

Witków is a village in the administrative district of Gmina Dołhobyczów, within Hrubieszów County, Lublin Voivodeship, in eastern Poland, close to the border with Ukraine. It lies approximately 5 kilometres (3 mi) west of Dołhobyczów, 27 km (17 mi) south of Hrubieszów, and 123 km (76 mi) south-east of the regional capital Lublin.

Cilən is a village in the Khojavend Rayon of Azerbaijan.

Yukhary Bugur is a village in the Ismailli Rayon of Azerbaijan.

Gustawin is a village in the administrative district of Gmina Krasne, within Przasnysz County, Masovian Voivodeship, in east-central Poland. It lies approximately 8 kilometres (5 mi) south-west of Przasnysz and 85 km (53 mi) north of Warsaw.

Grabowo is a village in the administrative district of Gmina Przasnysz, within Przasnysz County, Masovian Voivodeship, in east-central Poland.

Szum is a village in the administrative district of Gmina Wołczyn, within Kluczbork County, Opole Voivodeship, in south-western Poland. It lies approximately 7 kilometres (4 mi) south-west of Wołczyn, 15 km (9 mi) west of Kluczbork, and 35 km (22 mi) north of the regional capital Opole.

Mierzyno is a village in the administrative district of Gmina Gniewino, within Wejherowo County, Pomeranian Voivodeship, in northern Poland. It lies approximately 4 kilometres (2 mi) south-west of Gniewino, 22 km (14 mi) north-west of Wejherowo, and 57 km (35 mi) north-west of the regional capital Gdańsk. 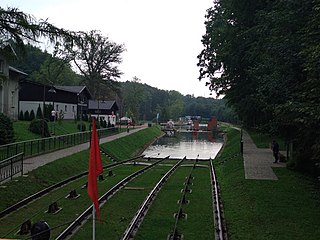 Buczyniec is a village in the administrative district of Gmina Rychliki, within Elbląg County, Warmian-Masurian Voivodeship, in northern Poland. It lies approximately 5 kilometres (3 mi) south-east of Rychliki, 19 km (12 mi) south-east of Elbląg, and 64 km (40 mi) west of the regional capital Olsztyn.

Oštrelj is a village in the municipality of Bor, Serbia. According to the 2002 census, the village has a population of 654 people. 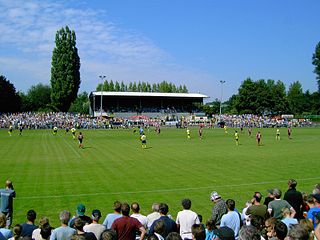 Stadion Hoheluft is a Football stadium in Eppendorf, Hamburg, Germany. It is used as the stadium of SC Victoria Hamburg matches. The capacity of the stadium is 11,000 spectators. The record attendance for the ground was 37,000 during the final of the British Zone Championship in which Hamburger SV beat FC St. Pauli 6–1.

Dowlatabad is a village in Meshgin-e Sharqi Rural District, in the Central District of Meshgin Shahr County, Ardabil Province, Iran. At the 2006 census, its population was 1,315, in 334 families.

Longjing station is a Metro station of Shenzhen Metro Line 7. It opened on 28 October 2016.