Last updated May 11, 2022
The practice of wearing a tightly-laced corset

Tightlacing (also called corset training) is the practice of wearing a tightly-laced corset. It is done to achieve cosmetic modifications to the figure and posture or to experience the sensation of bodily restriction.

Corsets were first worn by members of both sexes of Minoans of Crete, but did not become popular again until the sixteenth century. They remained a feature of fashionable dress until the French Revolution, [1] when corsets for women were designed mainly to turn the torso into a fashionable cylindrical shape, although they narrowed the waist as well. They had shoulder straps, ended at the waist, flattened the bust, and, in so doing, pushed the breasts up. The emphasis of the corset became less on the smallness of the waist than on the contrast between the rigid flatness of the bodice front and the curving tops of the breasts peeking over the top of the corset.[ citation needed ]

At the end of the eighteenth century, the corset fell into decline. Fashion for women embraced the Empire silhouette: a Graeco-Roman style, with the high-waisted dress that was unique to this style gathered under the breasts. The waist was no longer emphasised, and dresses were sewn from thin muslins rather than the heavy brocades and satins of the aristocratic high fashion style preceding it.

The reign of the Empire waist was short. In the 1830s, shoulders widened (with puffy gigot sleeves or flounces), skirts widened (layers of stiffened petticoats), and the waistline narrowed and migrated toward a natural position. By the 1850s, exaggerated shoulders were out of fashion and waistlines were cinched at the natural waist above a wide skirt. Fashion had achieved what is now known as the Victorian silhouette.

In the 1830s, the artificially inflated shoulders and skirts made the intervening waist look narrow, even with the corset laced only moderately. When the exaggerated shoulders disappeared, the style dictated that the waist had to be cinched tightly in order to achieve the same effect. It is in the 1840s and 1850s that the term "tightlacing" is first recorded. It was ordinary fashion taken to an extreme. [2]

Young and fashionable women were most likely to tightlace, especially for balls, fashionable gatherings, and other occasions for display. Older, poorer, and primmer women would have laced moderately – just enough "to be decent"[ citation needed ].

The Victorian and Edwardian corset differed from earlier corsets in numerous ways. The corset no longer ended at the waist, but flared out and ended several inches below the waist. The corset was exaggeratedly curvaceous rather than cylindrical. It became much sturdier in construction, thanks to improvements in technology. Spiral steel stays curved with the figure rather than dictating a cylindrical silhouette. While many corsets were still sewn by hand to the wearer's measurements, there was also a thriving market in cheaper mass-produced corsets.

In the late years of the Victorian era, medical reports and rumors claimed that tightlacing was fatally detrimental to health (see Victorian dress reform).[ citation needed ] Women who suffered to achieve small waists were also condemned for their vanity and excoriated from the pulpit as slaves to fashion. It was frequently claimed that too small a waist was ugly rather than beautiful.[ citation needed ] Dress reformers exhorted women to abandon the tyranny of stays and free their waists for work and healthy exercise.

Despite the efforts of dress reformers to eliminate the corset, and despite medical and clerical warnings, women persisted in tightlacing. In the early 1900s, the small corseted waist began to fall out of fashion. The feminist and dress reform movements had made practical clothing acceptable for work or exercise. The rise of the Artistic Dress movement made loose clothing and the natural waist fashionable even for evening wear. Couturiers such as Fortuny and Poiret designed exotic, alluring costumes in pleated or draped silks, calculated to reveal slim, youthful bodies. If one didn't have such a body, new undergarments, the brassiere and the girdle, promised to give the illusion of one.

Corsets were no longer fashionable, but they entered the underworld of the fetish, along with items such as bondage gear and vinyl catsuits. From the 1960s to the 1990s, fetish wear became a fashion trend and corsets made something of a resurgence. They are often worn as top garments rather than underwear. Most corset wearers own a few bustiers or fashionable authentic corsets for evening wear, but they do not tightlace. Historical reenactors often wear corsets, but few tightlace. 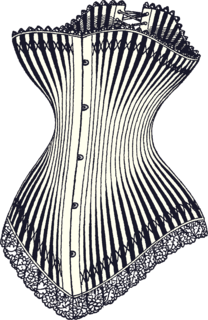 A corset is a support garment commonly worn to hold and train the torso into a desired shape, traditionally a smaller waist or larger bottom, for aesthetic or medical purposes, or support the breasts. Both men and women are known to wear corsets, though this item was for many years an integral part of women's wardrobes.

Victorian fashion consists of the various fashions and trends in British culture that emerged and developed in the United Kingdom and the British Empire throughout the Victorian era, roughly from the 1830s through the 1890s. The period saw many changes in fashion, including changes in styles, fashion technology and the methods of distribution. Various movement in architecture, literature, and the decorative and visual arts as well as a changing perception of gender roles also influenced fashion.

Wasp Waist is a women's fashion silhouette, produced by a style of corset and girdle, that has experienced various periods of popularity in the 19th and 20th centuries. Its primary feature is the abrupt transition from a natural-width rib cage to an exceedingly small waist, with the hips curving out below. It takes its name from its similarity to a wasp's segmented body. The sharply cinched waistline also exaggerates the hips and bust.

The corset has been an indispensable supportive undergarment for women, in Europe for several centuries, evolving as fashion trends have changed and being known, depending on era and geography, as a pair of bodies, stays and corsets. The appearance of the garment represented a change from people wearing clothes to fit their bodies to changing the shape of their bodies to support and fit their fashionable clothing. 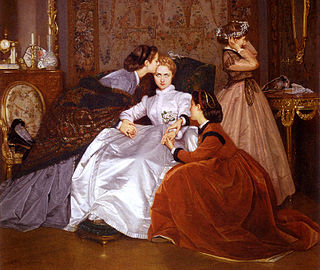 1860s fashion in European and European-influenced countries is characterized by extremely full-skirted women's fashions relying on crinolines and hoops and the emergence of "alternative fashions" under the influence of the Artistic Dress movement.

1870s fashion in European and European-influenced clothing is characterized by a gradual return to a narrow silhouette after the full-skirted fashions of the 1850s and 1860s.

1830s fashion in Western and Western-influenced fashion is characterized by an emphasis on breadth, initially at the shoulder and later in the hips, in contrast to the narrower silhouettes that had predominated between 1800 and 1820.

1850s fashion in Western and Western-influenced clothing is characterized by an increase in the width of women's skirts supported by crinolines or hoops, the mass production of sewing machines, and the beginnings of dress reform. Masculine styles began to originate more in London, while female fashions originated almost exclusively in Paris.

During the 1820s in European and European-influenced countries, fashionable women's clothing styles transitioned away from the classically influenced "Empire"/"Regency" styles of c. 1795–1820 and re-adopted elements that had been characteristic of most of the 18th century, such as full skirts and clearly visible corseting of the natural waist.

1880s fashion in the in Western and Western-influenced countries is characterized by the return of the bustle. The long, lean line of the late 1870s was replaced by a full, curvy silhouette with gradually widening shoulders. Fashionable waists were low and tiny below a full, low bust supported by a corset. The Rational Dress Society was founded in 1881 in reaction to the extremes of fashionable corsetry. 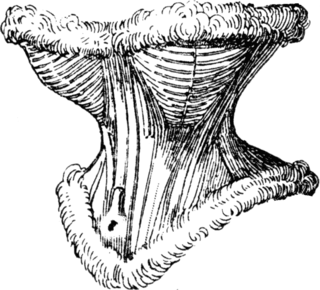 An hourglass corset is a garment that produces a silhouette resembling an hourglass shape characterized by wide hips, narrow waist, and wide bust.

Fashion in the period 1795–1820 in European and European-influenced countries saw the final triumph of undress or informal styles over the brocades, lace, periwigs and powder of the earlier 18th century. In the aftermath of the French Revolution, no one wanted to appear to be a member of the French aristocracy, and people began using clothing more as a form of individual expression of the true self than as a pure indication of social status. As a result, the shifts that occurred in fashion at the turn of the 19th century granted the opportunity to present new public identities that also provided insights into their private selves. Katherine Aaslestad indicates how "fashion, embodying new social values, emerged as a key site of confrontation between tradition and change." 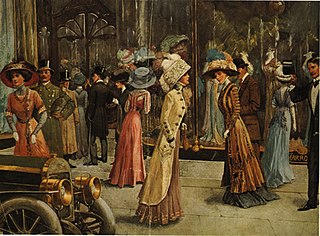 The corset controversy concerns supporters' and detractors' arguments for and against wearing a corset. The controversy was contemporary with the time that corsets were popular in society. Corsets, variously called a pair of bodys or stays, were worn by European women from the late 16th century onward, changing their form as fashions changed. In spite of radical change to fashion geographically and temporally, the corset or some derivative beneath an outer gown shaped the body or provided structure.