Tomie Arai (born 1949) is an American artist and community activist who was born, raised, and is still active in New York City. Her works works consist multimedia site specific art pieces that deal with topics of gender, community, and racial identity. [1] She is highly involved in community discourse, and co-founded the Chinatown Art Brigade. [2]

Artist and community activist Tomie Arai was born in New York City in 1949. [3] A third generation Japanese American, her parents are from Hawaii and California and her grandparents were farmers who settled in the country in the early 1900s.[ citation needed ] Her experiences growing up Asian American in New York City deeply color her work as an artist, as many of her works deal with the urban experience and attempt to make connections to her family and community through art. [4] [ non-primary source needed ]

At the time she began to pursue a career in art in the late 1960s and early 1970s, her feeling that the New York art world failed to address her experiences as an Asian American and woman of color propelled her to become involved in community art. [5] She joined the Basement Workshop in 1972 and there, learned about Asian American activism and making art along with other Asian American artists, including Arlan Huang. Between 1972 and 1979, Arai worked at Cityarts Workshop as a resource center coordinator and mural director, painting a series of community murals in New York City’s Lower East Side. [6] Cityarts’ first project in Chinatown, A History of Chinese Immigration to the U.S., involved many Basement Workshop members. After Cityarts, Arai worked as a freelance graphic artist for Alan Okada of Citibank. At the time, Arai created posters, brochures and promotional materials for community groups as part of Citibank’s Graphic Support program. In the 1980s, Arai began to focus on printmaking.

As a Board Member of the Lower East Side Printshop and a keyholder for over 15 years, Arai also participated in print residencies at the Women’s Studio Workshop, the Printmaking Workshop, Self Help Graphics and the Brandywine Workshop in Philadelphia. These non-profit workspaces encouraged artists to collaborate and experiment with the printed image. Arai was also a co-founding member of the Asian American arts collective Godzilla, active in New York City during the 1990s. [7]

As an artist, Arai has been an avid proponent of making art in spaces outside of the hierarchical gallery system and the need to redefine art and its relation to community. Instead of the historical paradigm of public art as a monumental sculpture placed in a site with no connection to the community, she advocates community-based art created through a process of dialog between artist and community members whose end goal is creating art with which the community feels ownership. She stresses that artists need to build relationships with organizations and communities. [3] She has created community-based works such as “Swirl” a public sculpture in Philadelphia that helps bring to the fore the less visible history of Chinese Americans in the nation’s founders’ city, and a variety of other works commissioned by the Arizona Humanities Council, the Cambridge Arts Council, the Bronx Museum of the Arts, the National Endowment for the Arts and the Museum of Chinese in America.

In addition, Arai has created site specific public works of art commissioned by the New York City Department of Cultural Affairs' Percent for Art Program, the General Services Administration of the Federal Government, the NYC MTA Arts for Transit Program and the San Francisco Arts Commission that deal with community themes. [8]

An Asian American activist who participated in the political movements of the 1960s, Arai is still engaged in community work. She sat on the Boards of the Museum of Chinese in the Americas, where she served as its first artist-in-residence, the Lower East Side Printshop, Printed Matter, the Women’s Studio Workshop and the Bread and Roses Cultural Project of the 1199 Health and Hospitals Workers Union. She is currently serving on the Board of Directors of the Joan Mitchell Foundation.

Through her body of work utilizing silk-screening, site-specific installations, collections of oral histories and community memories and images, Arai explores the relationship of art to history and the role that memory plays in retelling a collective past or the mythology of the past. [11] Her work demonstrates her persistent commitment to documenting and reclaiming a variety of peoples’ untold histories while it simultaneously also engages viewers in dialogue with contemporary social struggles.

Renewal by Arai was commissioned in 1995 and was installed in the Ted Weiss Federal Building on 1998. [12] Made of overlapping silkscreen images on canvas, this work was created to honor the ancestors of the African American descendant community of New York by commemorating the African Burial Ground site. [12]

Later, in 2006, Arai constructed the site-specific work Swirl out of wood, steel, and silk screened photographs of local members of the community. [13] [14] Located in Philadelphia, this artwork was made in response to the then-Mayor John F. Street's plans to build a baseball stadium for the Philadelphia Phillies, that would result in the demolition of various establishments within Chinatown. [13] [15] The artwork itself is a large display of family photographs, shaped like the Chinese jade bi, situated in the Vine Street Expressway. [13]

Arai created Back to the Garden in 2007, located in Pelham Parkway. The artwork consists of windows with glass recreations of local seasonal foliage inside. [16] Screened and fired into these windows and foliage recreations are archival photographs of the surrounding area, taken from 1899 to 1969. [16]

Arai's work is in the permanent collections in museums including the Museum of Modern Art, Library of Congress, [17] [18] [19] and the Museum of Chinese in the Americas. [20]

In 1997 Arai was included in Just Like Me: Self Portraits and Stories which was edited by Harriet Rohmer and published by Children's Book Press. [28] Later, in 1998 the Bronx Museum of the Arts published Arai's book: Tomie Arai: Double happiness. [29] Arai also illustrated children's book, Sachiko Means Happiness (1990). [30] 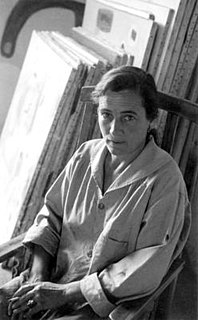 Agnes Bernice Martin, RCA, was an American abstract painter. Her work has been defined as an "essay in discretion on inward-ness and silence". Although she is often considered or referred to as a minimalist, Martin considered herself an abstract expressionist. She was awarded a National Medal of Arts from the National Endowment for the Arts in 1998. She was elected to the Royal Canadian Academy of Arts in 2004. 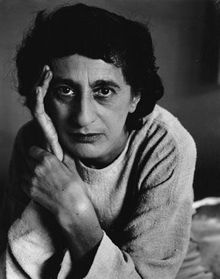 Anni Albers was a German-born American textile artist and printmaker credited with blurring the lines between traditional craft and art. 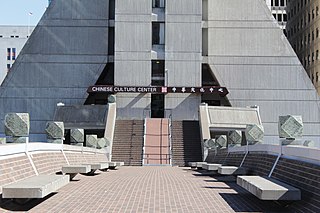 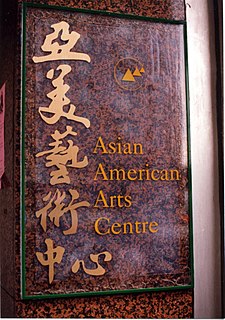 CITYarts, Inc. is a nonprofit public arts and education organization, focusing on murals and mosaics.

Akiko Ichikawa is a transdisciplinary artist, editor, and writer-activist based in New York City. She has written on contemporary art and culture for Flash Art,Art in America, Hyperallergic, and zingmagazine. Ichikawa's article on the photography of Dorothea Lange, Toyo Miyatake, and Ansel Adams at Manzanar became popular in fall 2016, following comments by a spokesperson of a Trump-supporting PAC on Fox News.

Harmony Hammond is an American artist, activist, curator, and writer. She was a prominent figure in the founding of the feminist art movement in 1970's New York.

Nina Kuo is a Chinese American painter, photographer, sculptor, author, video artist and activist who lives and works in New York City. Her work examines the role of women, feminism and identity in Asian-American art. Kuo has worked in partnership with the artist Lorin Roser.

Senga Nengudi is an African-American visual artist best known for her abstract sculptures that combine found objects and choreographed performance. She is part of a group of African-American avant-garde artists working in New York and Los Angeles from the 1960s onward.

Zarina Hashmi, known professionally as Zarina, was an Indian-American artist and printmaker based in New York City. Her work spans drawing, printmaking, and sculpture. Associated with the Minimalist movement, her work utilized abstract and geometric forms in order to evoke a spiritual reaction from the viewer.

Bernice Bing (1936–1998) was a Chinese American lesbian artist involved in the San Francisco Bay Area art scene in the 1960s. She was known for her interest in the Beats and Zen Buddhism, and for the "calligraphy-inspired abstraction" in her paintings, which she adopted after studying with Saburo Hasegawa.

Basement Workshop emerged as an the first Asian-American political and arts organization in New York City, in existence from 1970 to 1986. Created during the Asian American Movement, it became an umbrella organization for a diverse group of young Asian-Americans seeking creative and new ways of intersecting artistic expression with political and community activism. The rise of the Black Power Movement and protests against the Vietnam War provided a partial yet weighty backdrop for Basement’s inception.

Jaishri Abichandani is a Brooklyn-based artist and curator. Her interdisciplinary practice focuses on the intersection of art, feminism, and social practice. Abichandani was the founder of the South Asian Women's Creative Collective, with chapters in New York City and London, and director from 1997 until 2013. She was also the Founding Director of Public Events and Projects from at the Queens Museum from 2003-2006.

Risë Wilson is a community organizer, activist, strategic planner, curriculum developer, non-profit consultant, and the current director of philanthropy at the Robert Rauschenberg Foundation, who lives and works in New York City. Founder of the Laundromat Project, she has been named one of the "worlds best emerging social entrepreneurs" in 2004. In 2015, she moderated the Creative Time Summit round table, entitled "My Brooklyn."

Audrey Chan is a Chinese-American Los Angeles-based artist, writer, and educator known for her research-based projects that articulate political and cultural identities through her allegorical narrative and the feminist construct of "the personal is political." Her works include paintings, digital compositions, installation, video, public performance, murals and symposiums.

Chinatown Art Brigade (CAB) is a cultural collective of artists, media makers and activists creating art and media to advance social justice. Their work focuses on the belief that "collaboration with and accountability to those communities that are directly impacted by racial, social and economic inequities must be central to cultural, art, or media making process." Through art and public projections, CAB aims to share stories of Chinatown tenants to fight displacement and gentrification. Chinatown Art Brigade collaborates with the Chinatown Tenants Union of CAAAV Organizing Asian Communities, a non-profit organization that fights against tenant rights violation, evictions, and displacement of low-income pan-Asian communities.

Ka-Man Tse is a Hong Kong-born photographer, video artist, and educator based in New York. Influenced by her Asian-American and queer identity, Tse primarily uses portraiture to tell stories about the people, identity, visibility, and place in and around the queer community.