Tomiyamichthys is a genus of gobies found from the Red Sea through the Indian Ocean to the western Pacific Ocean. The name of this genus honours the Japanese ichthyologist Itiro Tomiyama of the Tokyo Imperial University, who described the type species, Tomiyamichthys oni , in 1936. [1]

There are currently 14 recognized species in this genus:

Eviota is a genus of fish in the family Gobiidae, commonly as dwarfgobies found in the Indo-Pacific region, where it is distributed from Japan to Australia and from Africa to Pitcairn Island. Species are mainly associated with coral reefs. Many of these fish are short-lived, with life cycles as brief as 3.5 weeks in the tropics. Some species are hermaphrodites and some representatives live symbiotically among the tentacles of the mushroom coral. 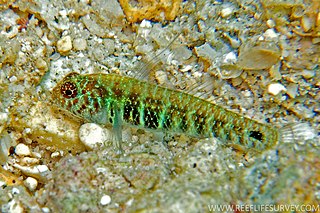 Eviota hoesei, Doug's eviota, is a species of goby associated with reefs and tide pools. It has a limited distribution in the southwest Pacific, being found around New Caledonia, Lord Howe Island, Norfolk Island and the Elizabeth and Middleton Reefs at depths of from 0 to 25 metres. Within this limited area this is an abundant species.

Amblyeleotris is a genus of fish in the family Gobiidae found throughout the Indo-Pacific region. This is the largest genus of the shrimp gobies or prawn gobies, so-called because of their symbiotic relationship with certain alpheid shrimps. The shrimp excavates and maintains a burrow used by both animals while the goby, which has far superior eyesight, acts as a lookout for predators. The shrimp maintains almost constant contact with the fish with an antenna. These species vary considerably in size from less than 30 mm to almost 200 mm standard length.

Glossogobius hoesei, Hoese's goby, is a species of goby endemic to the Ayamaru Lakes in West Papua, Indonesia where it can be found on muddy or gravel substrates as well as in small tributary streams. This species can reach a length of 7 centimetres (2.8 in) SL. The specific name honours the ichthyologist Douglass Fielding Hoese of the Australian Museum in Sydney who has made an important contribution to the study of fishes in the order Gobiiformes.

Silhouettea is a genus of gobies native to the Indian Ocean and the western Pacific Ocean. The name of this genus refers to the island of Silhouette in the Seychelles where the type specimens of the type species, Silhouettea insinuans, were collected. 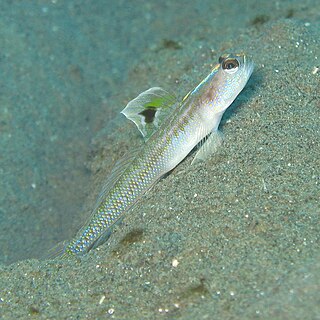 Vanderhorstia is a genus of gobies native to the Indian and Pacific oceans. The name of this genus honours the Dutch biologist Cornelius van der Horst (1889-1951) of the University of The Witwatersrand, Johannesburg, who was well known for his interest in marine biology.

Amblyeleotris randalli, Randall's prawn goby, is a marine benthic species of goby native to tropical reefs of the central Indo-Pacific. This species can also be found in the aquarium trade.

Cryptocentrus also known as Watchman gobies, and one of the genera known as shrimp gobies or prawn gobies, is a genus of gobies native to tropical marine waters of the Indian and Pacific oceans.

Antilligobius is a genus of goby. It contains only the species Antilligobius nikkiae, the sabre goby, which is native to deep waters of the western Atlantic Ocean. The specific name honours Nicole Laura Schrier, the daughter of the owner of the Sea Aquarium in Curaçao, who collected many of the type specimens. 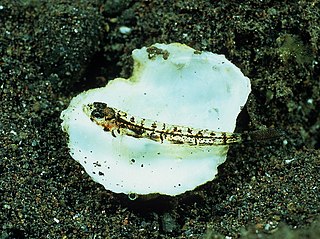 Grallenia is a genus of fish in the family Gobiidae native to the western Pacific Ocean.

Kelloggella is a genus of fish in the family Gobiidae, the gobies. This genus is distributed in the Indian and Pacific Oceans. The genus name honours the American entomologist Vernon Lyman Kellogg (1867-1937) of Stanford University, the discoverer of Kelloggella cardinalis.

Myersina is a genus of ray-finned fish from the family Gobiidae, the true gobies which are found from the Atlantic coast of South Africa through the Indian Ocean to the western Pacific Ocean. The generic name honours the American ichthyologist George S. Myers (1905-1985) who was a younger colleague of Herre's at the time at which he described the genus and who went on to be president of the American Society of Ichthyologists and Herpetologists, the head of the Division of Fishes at the United States National Museum and an ichthyologist for the United States Fish and Wildlife Service.

Stonogobiops is a genus of gobies native to the Indian and Pacific oceans. This is one of the "shrimp goby" genera, the members of these genera being commensal with various species of shrimps.

Sueviota is a genus of fish in the family Gobiidae native to the Indian and Pacific Ocean.

Trimma is a genus of fish in the family Gobiidae native to the Indian and Pacific Ocean. Together with members of the genus Eviota, they are known commonly as pygmygobies or dwarfgobies.

Dotsugobius bleekeri, also known as the dark mangrovegoby is a species of fish in the family Gobiidae known from brackish estuarine and the adjacent freshwater areas of the eastern Indian Ocean, Andaman Sea and Western Pacific. The generic name honours the Japanese ichthyologist Yoshie Dotsu, whose surname was spelled “Dôtu” in his earlier publications, of Nagasaki University while the specific name honours the Dutch ichthyologist, herpetologist and physician Pieter Bleeker (1819-1878) who was a significant worker on the fish fauna of the Dutch East Indies. This species is placed in the genus Lophogobius by some authorities. 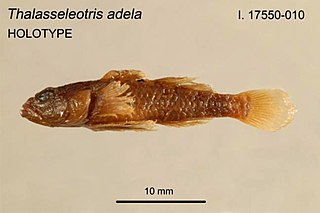 Ophiogobius jenynsi is a species of ray-finned fish from the biology Gobiidae, the true gobies. It is a demersal, marine species which is found off the coast of Chile in the intertidal zone. It feeds mainly on crustaceans. This species was originally named as Gobius ophicephalus by Leonard Jenyns in 1842, subsequently misspelt as ophiocephalus, but this name was preoccupied by Pallas's 1811 Gobius ophiocephalus, Hoese renamed the species in honour of Jenyns in 1976. This is the only species in its genus.

Helen K. Larson is an ichthyologist who specialises in the fishes of the Indo-Pacific.