The toolache wallaby or Grey's wallaby (Macropus greyi) is an extinct species of wallaby from southeastern South Australia and southwestern Victoria.

A species described by George Waterhouse in 1846. The type specimen was collected at Coorong in South Australia. [4] The author cites an earlier name, Halmaturus greyii, published by John Edward Gray in 1843 without a valid description, assigning it to a subgenus of the same name—Macropus (Halmaturus)—and providing the common name of the newly described species as Grey's wallaby. [5] [6] The common name and epithet greyi commemorates the collector and explorer George Grey, who provided the two specimens to researchers at the British Museum of Natural History. [3] A systematic revision has seen the species placed in a subgeneric arrangement as Macropus (Notamacropus) greyi, recognising an affinity with eight other species of the subgenus named as Notamacropus Dawson and Flannery, 1985. [7] An arrangement that elevates the subgenera of Macropus is recognised as Notamacropus greyi. [8] A genetic analysis found that its closest relative is the western brush wallaby. [9]

The common names have also included monkeyface and onetwo. [6]

The toolache wallaby was a slim, graceful, and elegant creature that had a pale ashy-brown pelt with a buff-yellow underbelly. [6] [10] The tail was pale grey and became almost white near the tip. The distinct black mark on its face reached from its nose to the eye. The forearms, feet, and tips of the ears were also black. The different colours of the animal also consisted of different textured furs which are believed to have changed seasonally or varied depending on the individual. The body measurements differed between males and females. In general, male toolache wallabies had a head and body length up to 810 mm while females measured up as 840 mm. Despite the females being taller, males had longer tail lengths at about 730 mm while the female's tail length was 710 mm. [11]

The toolache wallaby was a nocturnal animal, foraging for vegetation during the twilight hours of the day. [10] Their movements were unusual and extremely rapid, able to outpace almost any terrestrial predator; they were known to evade the fastest dogs of the colonial hunters. [6]

The toolache wallaby occupied the southeastern corner of Australia to the western part of Victoria. The preferred habitat ranged from swampy short grassland areas, to taller grassed areas of the open country. Toolache wallabies were known to be sociable creatures who lived in groups; they were often seen resting and grazing in groups. [11]

A combination of numerous threats caused the decline and eventual extinction of the toolache wallaby. One of the largest factors was the destruction of its habitat. Since swamps were an important part of its habitat, once they were cleared out, much of the vegetation went with it. Besides the destruction of its habitat, the introduction of predators, such as the European red fox, began to kill off the species as well. On top of all this, the animal was also hunted for sport and for its beautiful pelt. [11] Also, what is not well known about the extinction threat to this species was the effect of the direct predation of the aboriginal population and their introduction of Dingos where macropods generally resided. [12]

The toolache wallaby only survived 85 years after European occupation. In the 1920s, a conservation effort was made to try and bring the animal back from the brink of extinction. The plan was to capture and breed the last known surviving members of the species in captivity. This effort ended in disaster after 10 of the 14 of them were accidentally killed in the attempt to capture them. The remaining four survived in captivity.

The last wild sightings were recorded in 1924, and the last known toolache wallaby survived in captivity until 1939. [2] The species is presumed to be extinct, although extensive research is still being conducted in the region after reports of suspected sightings through the 1970s. However, no members of the species have been sighted since. 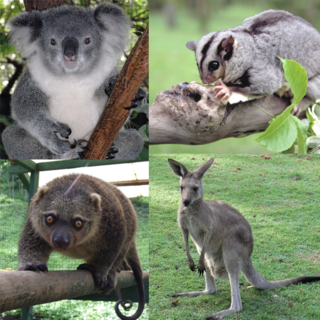 Diprotodontia is the largest extant order of marsupials, with about 155 species, including the kangaroos, wallabies, possums, koala, wombats, and many others. Extinct diprotodonts include the hippopotamus-sized Diprotodon, and Thylacoleo, the so-called "marsupial lion".

Macropodidae is a family of marsupials, commonly known as kangaroos, wallabies, tree-kangaroos, wallaroos, pademelons, quokkas, and several other terms. These genera are allied to the suborder Macropodiformes, containing other macropods, and are native to the Australian continent, New Guinea and nearby islands.

The Parma wallaby was first described by British naturalist John Gould in about 1840. A shy cryptic creature of the wet sclerophyll forests of northern New South Wales (Australia), it was never commonly encountered and, even before the end of the 19th century, it was believed to be extinct. 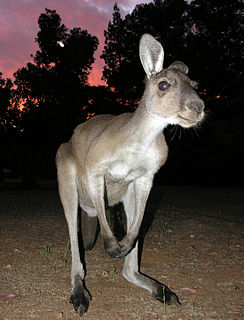 The western grey kangaroo, also referred to as a western grey giant kangaroo, black-faced kangaroo, mallee kangaroo, and sooty kangaroo, is a large and very common kangaroo found across almost the entire southern part of Australia, from just south of Shark Bay through coastal Western Australia and South Australia, into western Victoria, and in the entire Murray–Darling basin in New South Wales and Queensland.

Wallaroo is a common name for several species of moderately large macropods, intermediate in size between the kangaroos and the wallabies. The word "wallaroo" is from the Dharug walaru. In general, a large, slim-bodied macropod of the open plains is called a "kangaroo"; a small to medium-sized one, particularly if it is relatively thick-set, is a "wallaby". Most wallaroos are only a little smaller than a kangaroo and a little bigger than a wallaby, fairly thick-set, and are found in open country. All share a particular habit of stance: wrists raised, elbows tucked close into the body, and shoulders thrown back, and all have a large, black-skinned rhinarium. 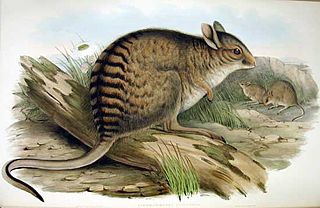 The banded hare-wallaby, mernine, or munning is a marsupial currently found on the Islands of Bernier and Dorre off western Australia. Reintroduced populations have recently been established on islands and fenced mainland sites, including Faure Island and Wadderin Sanctuary near Narembeen in the central wheatbelt.. 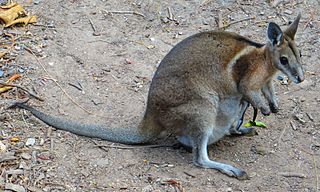 The crescent nail-tail wallaby, also known as the worong, is a small species of marsupial that grazed on grasses in the scrub and woodlands of southwestern and central Australia. They were common in Western Australia before they disappeared in the early 20th century and persisted in the central deserts until at least the 1950s. The pelage was soft and silky and an ashen grey colouring overall, highlighted in part with rufous tones. There were light and dark patches of fur across the body, the moon-like crescents inspiring their names, and had attractive stripes on the face. Like the two remaining species of the genus, the northern Onychogalea unguifera and rare O. fraenata, it had a horny spur at the tip of its tail. The species was compared to a hare or rabbit, in its habits, appearance and taste, and weighed around 3.5 kilograms.

The eastern hare-wallaby once also known as the common hare wallaby, is an extinct species of wallaby that was native to southeastern Australia. It was first described by John Gould in 1841.

Macropus is a marsupial genus in the family Macropodidae. It has 13 extant species, which are divided into three subgenera. The genus includes four species of large terrestrial kangaroos, two species of wallaroos, and eight extant species of wallabies. The term is derived from the Ancient Greek μάκρος, makros "long" and πους, pous "foot". Thirteen known extinct species are recognised. The type species is the eastern grey kangaroo.

The rock-wallabies are the wallabies of the genus Petrogale.

The rufous hare-wallaby, also known as the mala, is a small macropod found in Australia. It was formerly widely distributed across the western half of the continent, but naturally occurring populations are now confined to Bernier Island and Dorre Island Islands off Western Australia.

The western brush wallaby, also known as the black-gloved wallaby, is a species of wallaby found in the southwestern coastal region of Western Australia. The wallaby's main threat is predation by the introduced red fox. The IUCN lists the western brush wallaby as Least Concern, as it remains fairly widespread and the population is believed to be stable or increasing, as a result of red fox control programs.

The black wallaroo, also known as Bernard's wallaroo or Woodward's wallaroo, is a species of macropod restricted to a small, mountainous area in Arnhem Land, Northern Territory, Australia, between South Alligator River and Nabarlek. It classified as near threatened, mostly due to its limited distribution. A large proportion of the range is protected by Kakadu National Park. 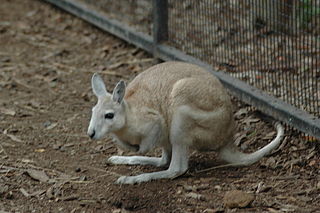 The northern or sandy nail-tail wallaby is a species of macropod found across northern Australia on arid and sparsely wooded plains. The largest species of the genus Onychogalea, it is a solitary and nocturnal herbivorous browser that selects its food from a wide variety of grasses and succulent plant material. Distinguished by a slender and long-limbed form that resembles the typical and well known kangaroos, although their standing height is shorter, around half of one metre, and their weight is less than nine kilograms. As with some medium to large kangaroo species, such as Osphranter rufus, they have an unusual pentapedal motion at slow speeds by stiffening the tail for a fifth limb. When fleeing a disturbance, they hop rapidly with the tail curled back and repeatedly utter the sound "wuluhwuluh". Their exceptionally long tail has a broad fingernail-like protuberance beneath a dark crest of hair at its end, a peculiarity of the genus that is much broader than the other species. The name unguifera, meaning claw, is a reference to this extraordinary attribute, the purpose of which is unknown.

Nabarleks, are a tiny species of macropod found in northern Australia. They are a shy and nocturnal animal that resides in rocky hollows and forages in the surrounding area. Their diet is grasses, sedges, and ferns found in and around their scrub covered refuges. They are distinguished by a reddish tinge to the mostly grey fur and a distinct stripe at the cheek. They move with great speed and agility when observed, with a forward leaning posture and a bushy tail that arches over the back.

The white-striped dorcopsis or greater forest wallaby is a species of marsupial in the family Macropodidae. It is found in the northern part of West Papua, Indonesia and Papua New Guinea. It is a common species in suitable tropical forest habitat and the IUCN lists its conservation status as being of "Least concern". 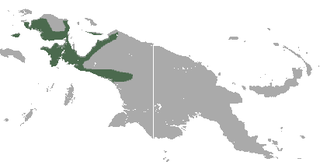 The brown dorcopsis, also known as the brown forest wallaby, is a species of marsupial in the family Macropodidae. It is endemic to the lowlands of West New Guinea and the nearby Indonesian islands in West Papua of Misool, Salawati, and Yapen.