In terms of structure and bonding S
3 and ozone (O
3) are similar. Both adopt bent structures and are diamagnetic. Although represented with S=S double bonds, the bonding situation is more complex. [1]

The S–S distances are equivalent and are 191.70±0.01  pm , and with an angle at the central atom of 117.36°±0.006°. [2] However, cyclic S
3, where the sulfur atoms are arranged in an equilateral triangle with three single bonds (similar to cyclic ozone and cyclopropane), is calculated to be lower in energy than the bent structure experimentally observed. [3]

The name thiozone was invented by Hugo Erdmann in 1908 who hypothesized that S
3 comprises a large proportion of liquid sulfur. [4] However its existence was unproven until the experiments of J. Berkowitz in 1964. [5] Using mass spectrometry, he showed that sulfur vapour contains the S
3 molecule. Above 1,200 °C (2,190 °F)S
3 is the second most common molecule after S
2 in gaseous sulfur. [5] In liquid sulfur the molecule is not common until the temperature is high, such as 500 °C (932 °F). However, small molecules like this contribute to most of the reactivity of liquid sulfur. [5] S
3 has an absorption peak of 425 nm (violet) with a tail extending into blue light. [5]

S
3 can also be generated by photolysis of S
3Cl
2 embedded in a glass or matrix of solid noble gas. [5]

Formation of compounds with a defined number of sulfur atoms is possible:

Although S
3 is elusive under ordinary conditions, the radical anion S•−
3 is abundant. [8] It exhibits an intense blue colour. Sometimes called thiozonide, [9] by analogy with the ozonide anion, O−
3. The gemstone lapis lazuli and the mineral lazurite (from which the pigment ultramarine is derived) contain S−
3. International Klein Blue, developed by Yves Klein, also contains the S−
3 radical anion. [10] This is valence isoelectronic with the ozonide ion. The blue colour is due to the C2A2 transition to the X2B1 electronic state in the ion, [9] causing a strong absorption band at 610–620  nm or 2.07  eV (in the orange region of the visible spectrum). [11] The Raman frequency is 523  cm−1 and another infrared absorption is at 580 cm−1. [5]

The S−
3 ion has been shown to be stable in aqueous solution under a pressure of 0.5  GPa (73,000  psi ), and is expected to occur naturally at depth in the earth's crust where subduction or high pressure metamorphism occurs. [12] This ion is probably important in movement of copper and gold in hydrothermal fluids. [13]

The S−
3 radical anion was also made by reducing gaseous sulfur with Zn2+
in a matrix. The material is strongly blue-coloured when dry and changes colour to green and yellow in the presence of trace amounts of water. [15] Another way to make it is with polysulfide dissolved in hexamethylphosphoramide where it gives a blue colour. [16]

Other methods of production of S−
3 include reacting sulfur with slightly dampened magnesium oxide. [11] 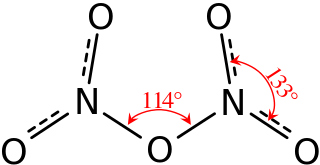 Dinitrogen pentoxide is the chemical compound with the formula N2O5, also known as nitrogen pentoxide or nitric anhydride. It is one of the binary nitrogen oxides, a family of compounds that only contain nitrogen and oxygen. It exists as colourless crystals that melt at 41 °C. Its boiling point is 47 °C, and sublimes slightly above room temperature, yielding a colorless gas. 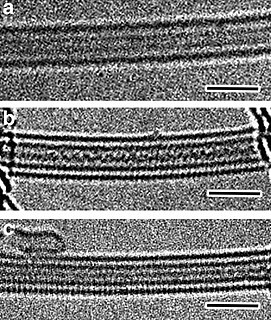 Ozonide is the polyatomic anion O−
3. Cyclic organic compounds formed by the addition of ozone to an alkene are also called ozonides.

Perylene or perilene is a polycyclic aromatic hydrocarbon with the chemical formula C20H12, occurring as a brown solid. It or its derivatives may be carcinogenic, and it is considered to be a hazardous pollutant. In cell membrane cytochemistry, perylene is used as a fluorescent lipid probe. It is the parent compound of a class of rylene dyes.

Photodissociation, photolysis, or photodecomposition is a chemical reaction in which a chemical compound is broken down by photons. It is defined as the interaction of one or more photons with one target molecule. Photodissociation is not limited to visible light. Any photon with sufficient energy can affect the chemical bonds of a chemical compound. Since a photon's energy is inversely proportional to its wavelength, electromagnetic waves with the energy of visible light or higher, such as ultraviolet light, x-rays and gamma rays are usually involved in such reactions.

The lower sulfur oxides are a group of inorganic compounds with the formula SmOn, where m > 2n. These species are often unstable and thus rarely encountered in everyday life. They are significant intermediates in the combustion of elemental sulfur. Some well characterized examples include sulfur monoxide (SO), its dimer S2O2, and a series of cyclic sulfur oxides, SnOx (x = 1, 2), based on cyclic Sn rings. 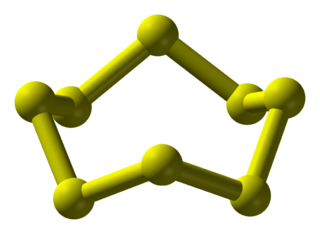 The element sulfur exists as many allotropes. In number of allotropes, sulfur is second only to carbon. In addition to the allotropes, each allotrope often exists in polymorphs delineated by Greek prefixes.

Thiophosphates are chemical compounds and anions with the general chemical formula PS
4−xO3−
x and related derivatives where organic groups are attached to one or more O or S. Thiophosphates feature tetrahedral phosphorus(V) centers.

Disulfur is the diatomic molecule with the formula S2. It is analogous to the dioxygen molecule but rarely occurs at room temperature. This violet gas is the dominant species in hot sulfur vapors. S2 is one of the minor components of the atmosphere of Io, which is predominantly composed of SO2. The instability of S2 is usually described in the context of the double bond rule.

Hydrogen disulfide is the inorganic compound with the formula H2S2. This hydrogen chalcogenide is a pale yellow volatile liquid with a camphor-like odor. It decomposes readily to hydrogen sulfide (H2S) and elemental sulfur.

Disulfur monoxide or sulfur suboxide is an inorganic compound with formula S2O, one of the lower sulfur oxides. It is a colourless gas and condenses to give a roughly sea green-colored solid that is unstable at room temperature.

The amino radical, •
NH
2, also known as the aminyl radical or azanyl radical, is the neutral form of the amide ion (NH−
2). Aminyl are highly reactive and consequently short lived like most radicals; however, they form an important part of nitrogen chemistry. In sufficiently high concentration, amino radicals dimerise to form hydrazine. While NH2 as a functional group is common in nature, forming a part of many compounds (e.g. the phenethylamines), the radical cannot be isolated in its free form.

Sulfanyl (HS•), also known as the mercapto radical, hydrosulfide radical, or hydridosulfur, is a simple radical molecule consisting of one hydrogen and one sulfur atom. The radical appears in metabolism in organisms as H2S is detoxified. Sulfanyl is one of the top three sulfur-containing gasses in gas giants such as Jupiter and is very likely to be found in brown dwarfs and cool stars. It was originally discovered by Margaret N. Lewis and John U. White at the University of California in 1939. They observed molecular absorption bands around 325 nm belonging to the system designated by 2Σ+ ← 2Πi. They generated the radical by means of a radio frequency discharge in hydrogen sulfide. HS• is formed during the degradation of hydrogen sulfide in the atmosphere of the Earth. This may be a deliberate action to destroy odours or a natural phenomenon.

Sodium polysulfide is a general term for salts with the formula Na2Sx, where x = 2 to 5. The species Sx2−, called polysulfide anions, include disulfide (S22−), trisulfide (S32−), tetrasulfide (S42−), and pentasulfide (S52−). In principle, but not in practice, the chain lengths could be longer. The salts are dark red solids that dissolve in water to give highly alkaline and corrosive solutions. In air, these salts oxidize, and they evolve hydrogen sulfide by hydrolysis. 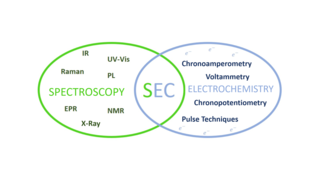