Troxell-Steckel House is a historic home located at Egypt, Whitehall Township, Lehigh County, Pennsylvania. It was built in 1756, and is a 2+1⁄2-story, fieldstone dwelling with a high-pitched gable roof in the Pennsylvania-German style. It measures 48 feet long and 35 feet wide. Also on the property is a contributing stone spring house and late-19th century barn. The house and property were given to the Lehigh County Historical Society in 1942, and is now open as a historic house museum. [3]

It was added to the National Register of Historic Places in 1980. [1] 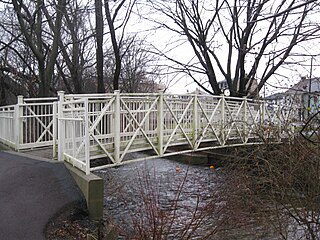 Bath is a borough in Northampton County, Pennsylvania, United States. It is named for Bath, Somerset, England. It is located in the Lehigh Valley region of the state with a population of 2,693 according to the 2010 census. 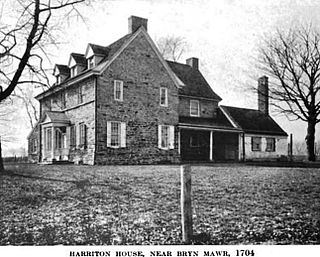 Harriton House, originally known as Bryn Mawr, is a historic house on Pennsylvania's Main Line, most famously the residence of Charles Thomson, the secretary of the Continental Congress. It was originally built in 1704 by Rowland Ellis, a Welsh Quaker, and was called Bryn Mawr, meaning high hill. The modern town of Bryn Mawr is named after the house, and the National Register of Historic Places has it listed under the original name. 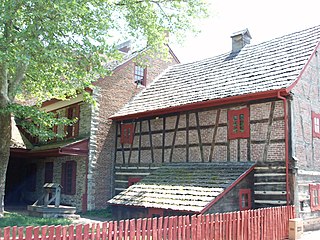 The Gen. Horatio Gates House and Golden Plough Tavern are two connecting historic buildings located in downtown York, York County, Pennsylvania. The buildings were restored between July 1961 and June 1964, and operated as a museum by the York County History Center. 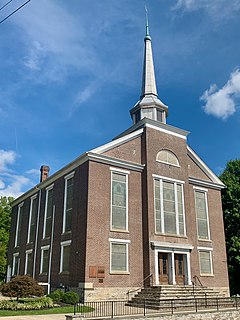 This is a list of the National Register of Historic Places listings in Lehigh County, Pennsylvania.

The Chad House, which was built by John Wyeth Jr. for John Chads, is located in Chadds Ford, Delaware County, Pennsylvania. The house was built after 1712 and was added to the National Register of Historic Places on March 11, 1971. John Chad's widow, Elizabeth, stayed in the house while it was in the line of fire during the Battle of Brandywine. The city of Chadds Ford relied on the spring ford on the property, and thus the city was named after John Chads. 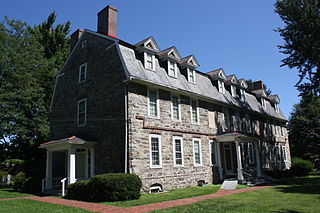 The Whitefield House and Gray Cottage are two historic homes on the Ephrata Tract in Nazareth, Northampton County, Pennsylvania. Construction on both buildings began in 1740, by Moravian settlers who moved to Nazareth after the failure of their mission to Native Americans and Europeans in the Savannah, Georgia area, 1735–1740. The two structures were added to the National Register of Historic Places on May 1, 1980. The Ephrata Tract and its buildings are owned by the Moravian Historical Society, and act as the Society's headquarters.

Alliance Furnace, also known as Jacob's Creek Furnace and Alliance Iron Works, is a historic iron furnace located at Perry Township, Fayette County, Pennsylvania. It was built in 1789, and is a stone structure measuring 25 feet square and 15 feet high. Also on the property is a charcoal house measuring 40 feet by 25 feet by 20 feet. It was built as a blast furnace, placed in blast in 1792 and closed in 1802.

The Old Franklin County Jail is a historic jail located at Chambersburg in Franklin County, Pennsylvania. It was built in 1818, and is a two-story, brick building with a slate covered hipped roof topped by a cupola. The original building measures 84 feet wide by 48 feet deep. In 1880, a cell block was added. The jail yard is divided into two sections and surrounded by a 20-foot-high wall. At least seven prisoners were hanged on the premises. 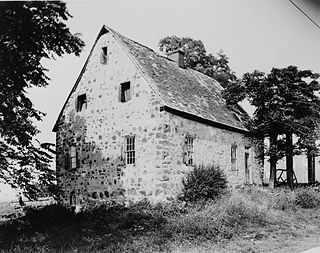 The Hans Herr House, also known as the Christian Herr House, is a historic home located in West Lampeter Township, Lancaster County, Pennsylvania. It was built in 1719, and is a 1 1/2-story, rectangular sandstone Germanic dwelling. It measures 37 feet, 9 inches, by 30 feet, 10 inches. It is the oldest dwelling in Lancaster County and the oldest Mennonite meetinghouse in America.

Trout Hall is a historic home located at Allentown, Lehigh County, Pennsylvania. It is one of the older homes in Allentown, built between 1768 and 1770, and is a 2 1/2-story, stone dwelling in the Georgian style. It was built as a summer home by James Allen, the third son of William Allen, founder of Allentown. Today, it houses the library and museum of the Lehigh County Historical Society. 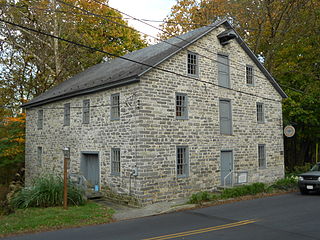 Helfrich's Springs Grist Mill is a historic grist mill located at Whitehall Township, Lehigh County, Pennsylvania along Jordan Creek. It was built in 1807, and is a three-story, fieldstone mill and measures approximately 30 feet wide and 58 feet deep. It has a slate roof. The Township of Whitehall acquired the property by eminent domain in 1963. The building is owned and operated by the Whitehall Historical Preservation Society, who began restoring it in 1984. 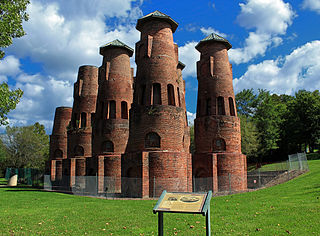 Coplay Cement Company Kilns, also known as the Saylor Park Industrial Museum, is an open-air historic site located at Coplay, Lehigh County, Pennsylvania. The nine kilns were built in 1892-1893, and used for the production of Portland cement. They are constructed of locally produced red brick, and are known as Schoefer vertical kilns. They were shut down in 1904. The Coplay Cement Company donated the kilns and surrounding land to Lehigh County in 1975, for a cement industry museum. It is operated as a partnership between the County of Lehigh, which owns and maintains the site, and the Lehigh County Historical Society, which provides educational services. It was added to the National Register of Historic Places in 1980. 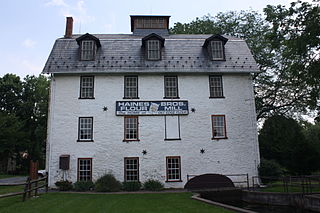 Haines Mill, also known as Haines Mill Museum, is a historic grist mill located at South Whitehall Township, Lehigh County, Pennsylvania. It was built about 1840, and is a four-story, stone building with a slate covered gambrel roof. It is three bay by three bay, 42 feet by 46 feet, 9 inches. The interior was rebuilt after a disastrous fire in 1908. A three-story brick addition was built in 1930, with a lean-to roof. Atop the main roof is a cupola. It remained in full operation until 1957. Today, Haines Mill is operated as a partnership between the County of Lehigh, which owns and maintains the site, and the Lehigh County Historical Society, which provides public tours. 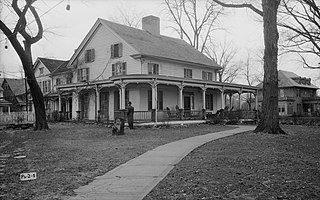 Denison House, also known as the Colonel Nathan Denison House, is a historic home located at Forty Fort, Luzerne County, Pennsylvania. It was built about 1790, and is a 2+1⁄2-story, frame building with a central chimney in the New England style. A rear addition and full-width front porch were added in the mid-19th century. The house has since been restored to its appearance in the 1790s.

Henry Melchior Muhlenberg House, also known as the John J. Schrack House, is a historic home located at Trappe, Montgomery County, Pennsylvania. The house was built about 1755, and is a 2+1⁄2-story, five bay, stone dwelling with a gable roof. It measures approximately 39 feet by 31 feet. Between 1994 and 1998, the house was restored to its 1776-1787 appearance. This was the period of residency by Rev. Henry Melchior Muhlenberg (1711-1787), patriarch of the Lutheran Church in the United States, and father of Peter Muhlenberg (1746-1807) and Frederick Muhlenberg (1750-1801). Also on the property are the remains of a pottery kiln dated to about 1720. It is the oldest intact pottery kiln known in Pennsylvania. The house is owned by the Trappe Historical Society and open as a historic house museum.

Old Customshouse is a historic custom house located at Erie, Erie County, Pennsylvania. It was built in 1838–1839, and is a two-story, brick and Vermont marble rectangular building. The front facade features a pedimented portico with six two-story, Doric order columns in the Greek Revival style. The building housed the post office until 1867, served as the Customs House for the port of Erie from 1849 to 1888, and later housed a Grand Army of the Republic post and the Erie County Historical Society. It is now part of a five building complex of the Erie Art Museum.