Tryptophan repressor (or trp repressor) is a transcription factor involved in controlling amino acid metabolism. It has been best studied in Escherichia coli , where it is a dimeric protein that regulates transcription of the 5 genes in the tryptophan operon. [1] When the amino acid tryptophan is plentiful in the cell, it binds to the protein, which causes a conformational change in the protein. [2] The repressor complex then binds to its operator sequence in the genes it regulates, shutting off the genes. [3] [4]

One of the genes regulated by trp repressor, trpR, codes for the tryptophan repressor protein itself. This is a form of feedback regulation. However, these genes are located on different operons.

The (tryptophan) repressor is a 25 kD protein homodimer which regulates transcription of the tryptophan biosynthetic pathway in bacteria. There are 5 operons which are regulated by trpR: the trpEDCBA, trpR, AroH, AroL, and mtr operons.

When the amino acid tryptophan is in plentiful supply in the cell, trpR binds 2 molecules of tryptophan, which alters its structure and dynamics so that it becomes able to bind to operator DNA. When this occurs, transcription of the DNA is prevented, suppressing the products of the gene - proteins which make more tryptophan. When the cellular levels of tryptophan decline, the tryptophan molecules on the repressor fall off, allowing the repressor to return to its inactive form.

The structure of the ligand-bound holorepressor, and the ligand-free forms have been determined by both X-ray crystallography and NMR. [6] [7] [8] [9] [10]

The trp operon consists of a regulatory gene, a promoter, an operator, and a terminator. The trp operon is active only when cellular tryptophan is scarce. If there isn't enough tryptophan, the repressor protein breaks off from the operator (where the repressor is normally bound) and RNA polymerase can complete its reading of the strand of DNA. If the RNA polymerase reaches the terminator (at the end of the DNA strand), the enzymes for tryptophan biosynthesis are expressed.

Enterobacteria phage λ is a bacterial virus, or bacteriophage, that infects the bacterial species Escherichia coli. It was discovered by Esther Lederberg in 1950. The wild type of this virus has a temperate life cycle that allows it to either reside within the genome of its host through lysogeny or enter into a lytic phase, during which it kills and lyses the cell to produce offspring. Lambda strains, mutated at specific sites, are unable to lysogenize cells; instead, they grow and enter the lytic cycle after superinfecting an already lysogenized cell.

In genetics, an operon is a functioning unit of DNA containing a cluster of genes under the control of a single promoter. The genes are transcribed together into an mRNA strand and either translated together in the cytoplasm, or undergo splicing to create monocistronic mRNAs that are translated separately, i.e. several strands of mRNA that each encode a single gene product. The result of this is that the genes contained in the operon are either expressed together or not at all. Several genes must be co-transcribed to define an operon.

François Jacob was a French biologist who, together with Jacques Monod, originated the idea that control of enzyme levels in all cells occurs through regulation of transcription. He shared the 1965 Nobel Prize in Medicine with Jacques Monod and André Lwoff.

The lac repressor is a DNA-binding protein that inhibits the expression of genes coding for proteins involved in the metabolism of lactose in bacteria. These genes are repressed when lactose is not available to the cell, ensuring that the bacterium only invests energy in the production of machinery necessary for uptake and utilization of lactose when lactose is present. When lactose becomes available, it is converted into allolactose, which inhibits the lac repressor's DNA binding ability, thereby increasing gene expression. 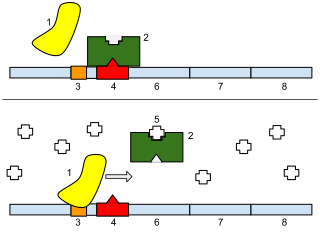 The lactose operon is an operon required for the transport and metabolism of lactose in E.coli and many other enteric bacteria. Although glucose is the preferred carbon source for most bacteria, the lac operon allows for the effective digestion of lactose when glucose is not available through the activity of beta-galactosidase. Gene regulation of the lac operon was the first genetic regulatory mechanism to be understood clearly, so it has become a foremost example of prokaryotic gene regulation. It is often discussed in introductory molecular and cellular biology classes for this reason. This lactose metabolism system was used by François Jacob and Jacques Monod to determine how a biological cell knows which enzyme to synthesize. Their work on the lac operon won them the Nobel Prize in Physiology in 1965.

In proteins, the helix-turn-helix (HTH) is a major structural motif capable of binding DNA. Each monomer incorporates two α helices, joined by a short strand of amino acids, that bind to the major groove of DNA. The HTH motif occurs in many proteins that regulate gene expression. It should not be confused with the helix–loop–helix motif.

Charles Yanofsky was an American geneticist on the faculty of Stanford University who contributed to the establishment of the one gene-one enzyme hypothesis and discovered attenuation, a riboswitch mechanism in which messenger RNA changes shape in response to a small molecule and thus alters its binding ability for the regulatory region of a gene or operon.

In molecular genetics, a repressor is a DNA- or RNA-binding protein that inhibits the expression of one or more genes by binding to the operator or associated silencers. A DNA-binding repressor blocks the attachment of RNA polymerase to the promoter, thus preventing transcription of the genes into messenger RNA. An RNA-binding repressor binds to the mRNA and prevents translation of the mRNA into protein. This blocking or reducing of expression is called repression.

In genetics, attenuation is a proposed mechanism of control in some bacterial operons which results in premature termination of transcription and is based on the fact that, in bacteria, transcription and translation proceed simultaneously. Attenuation involves a provisional stop signal (attenuator), located in the DNA segment that corresponds to the leader sequence of mRNA. During attenuation, the ribosome becomes stalled (delayed) in the attenuator region in the mRNA leader. Depending on the metabolic conditions, the attenuator either stops transcription at that point or allows read-through to the structural gene part of the mRNA and synthesis of the appropriate protein.

Gene structure is the organisation of specialised sequence elements within a gene. Genes contain the information necessary for living cells to survive and reproduce. In most organisms, genes are made of DNA, where the particular DNA sequence determines the function of the gene. A gene is transcribed (copied) from DNA into RNA, which can either be non-coding (ncRNA) with a direct function, or an intermediate messenger (mRNA) that is then translated into protein. Each of these steps is controlled by specific sequence elements, or regions, within the gene. Every gene, therefore, requires multiple sequence elements to be functional. This includes the sequence that actually encodes the functional protein or ncRNA, as well as multiple regulatory sequence regions. These regions may be as short as a few base pairs, up to many thousands of base pairs long.

The trp operon is an operon—a group of genes that is used, or transcribed, together—that codes for the components for production of tryptophan. The trp operon is present in many bacteria, but was first characterized in Escherichia coli. The operon is regulated so that, when tryptophan is present in the environment, the genes for tryptophan synthesis are not expressed. It was an important experimental system for learning about gene regulation, and is commonly used to teach gene regulation.

The gal operon is a prokaryotic operon, which encodes enzymes necessary for galactose metabolism. Repression of gene expression for this operon works via binding of repressor molecules to two operators. These repressors dimerize, creating a loop in the DNA. The loop as well as hindrance from the external operator prevent RNA polymerase from binding to the promoter, and thus prevent transcription. Additionally, since the metabolism of galactose in the cell is involved in both anabolic and catabolic pathways, a novel regulatory system using two promoters for differential repression has been identified and characterized within the context of the gal operon.

The gua operon is responsible for regulating the synthesis of guanosine mono phosphate (GMP), a purine nucleotide, from inosine monophosphate. It consists of two structural genes guaB (encodes for IMP dehydrogenase or and guaA apart from the promoter and operator region.

The nik operon is an operon required for uptake of nickel ions into the cell. It is present in many bacteria, but has been extensively studied in Helicobacter pylori. Nickel is an essential nutrient for many microorganisms, where it participates in a variety of cellular processes. However, excessive levels of nickel ions in cell can be fatal to the cell. Nickel ion concentration in the cell is regulated through the nik operon.

Paul B. Sigler was the Henry Ford II Professor of Molecular Biophysics and Biochemistry at Yale University. Major awards included membership in the National Academy of Sciences, HHMI Investigator status, and Guggenheim and Helen Hay Whitney Fellowships. He is noted for pioneering studies of Phospholipase A2 and trp repressor amongst many others.

The Tac-Promoter, or tac vector is a synthetically produced DNA promoter, produced from the combination of promoters from the trp and lac operons. It is commonly used for protein production in Escherichia coli.

Transcription-translation coupling is a mechanism of gene expression regulation in which synthesis of an mRNA (transcription) is affected by its concurrent decoding (translation). In prokaryotes, mRNAs are translated while they are transcribed. This allows communication between RNA polymerase, the multisubunit enzyme that catalyzes transcription, and the ribosome, which catalyzes translation. Coupling involves both direct physical interactions between RNA polymerase and the ribosome, as well as ribosome-induced changes to the structure and accessibility of the intervening mRNA that affect transcription.