Last updated May 13, 2022
For the United States-based denomination of the same name, see United Methodist Church.
Not to be confused with the Methodist Church of Great Britain.

The United Methodist Church Act, 1907, the Act of Parliament which enabled this amalgamation, received the royal assent on the 26 July 1907, and authorised the union "to deal with real and personal property belonging to the said three churches or denominations, to provide for the vesting of the said property in trust for the United Church so formed and for the assimilation of the trusts thereof, and for other purposes". [2] The union was completed on the 16 September 1907 in Wesley's Chapel, City Road, London. The Church gave power of speech and vote in its meetings to every member of 18 years of age and upwards.[ citation needed ] Its principal courts were constituted of an equal number of ministers and laymen.

The Church had theological colleges at Manchester and Sheffield, boys' schools at Shebbear College, Devon and at Harrogate (Ashville College), and a girls' school, Edgehill College at Bideford. It issued a weekly and two monthly journals. [2]

In the Methodist Union of 1932 the United Methodists merged with the Primitive Methodists and the Wesleyan Methodists to form a new church, known simply as the "Methodist Church". [1]

The Holiness movement is a Christian movement that emerged chiefly within 19th-century Methodism, and to a lesser extent other traditions such as Quakerism, Anabaptism, and Restorationism. The movement is Wesleyan in theology, and is defined by its view of personal sin, and emphasis on the doctrine of a second work of grace generally called entire sanctification or Christian perfection. For the Holiness Movement "the term 'perfection' signifies completeness of Christian character; its freedom from all sin, and possession of all the graces of the Spirit, complete in kind." A number of evangelical Christian denominations, parachurch organizations, and movements emphasize those beliefs as central doctrine.

A Methodist Local Preacher is a layperson who has been accredited by the Methodist Church to lead worship and preach on a regular basis. With separation from the Church of England by the end of the 18th century, a clear distinction was recognised between itinerant ministers (presbyters) and the local preachers who assisted them. Local preachers have played an important role in Methodism since the earliest days of the movement, and have also been important in English social history. These preachers continue to serve an indispensable role in the Methodist Church of Great Britain, in which the majority of church services are led by laypeople.

The Southern Methodist Church is a conservative Protestant Christian denomination with churches located in the southern part of the United States. The church maintains headquarters in Orangeburg, South Carolina.

The Methodist Church of Great Britain is a Protestant Christian denomination in Britain, and the mother church to Methodists worldwide. It participates in the World Methodist Council, and the World Council of Churches among other ecumenical associations.

Calvinistic Methodists were born out of the 18th-century Welsh Methodist revival and survive as a body of Christians now forming the Presbyterian Church of Wales. Calvinistic Methodism became a major denomination in Wales, growing rapidly in the 19th century, and taking a leadership role in the Welsh Religious Revival of 1904-5. 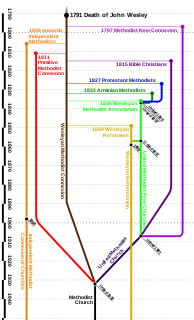 Methodist Union was the joining together of several of the larger British Methodist denominations. These were the Wesleyan Methodists, the Primitive Methodists, and the United Methodists. In 1932 a Uniting Conference met on 20 September in the Royal Albert Hall, London. It adopted the Deed of Union as setting forth the basis of union and declaring and defining the constitution and doctrinal standards of the Methodist Church, and a new Model Deed was executed.

John Scott Lidgett, CH was a British Wesleyan Methodist minister and educationist. He achieved prominence both as a theologian and reformer within British Methodism, stressing the importance of the church's engagement with the whole of society and human culture, and as an effective advocate for education within London. He served as the first President of the Methodist Conference in 1932–33.

The Wesleyan Church is a Methodist Christian denomination aligned with the holiness movement.

The Wesleyan Methodist Church was the majority Methodist movement in England following its split from the Church of England after the death of John Wesley and the appearance of parallel Methodist movements. The word Wesleyan in the title differentiated it from the Welsh Calvinistic Methodists and from the Primitive Methodist movement, which separated from the Wesleyans in 1807. The Wesleyan Methodist Church followed the Wesleys in holding to an Arminian theology, in contrast to the Calvinism held by George Whitefield, by Selina Hastings, and by Howell Harris and Daniel Rowland, the pioneers of Welsh Methodism. Its Conference was also the legal successor to John Wesley as holder of the property of the original Methodist societies.

The Evangelical Methodist Church of America Christian denomination based in the United States. Ardently Fundamental, the denomination has its roots in a movement of churches that broke away from Mainline Methodism in the 1940s and 50s.