WiiWare was a service that allowed Wii users to download games and applications specifically designed and developed for the Wii video game console made by Nintendo. These games and applications could only be purchased and downloaded from the Wii Shop Channel under the WiiWare section. Once the user had downloaded the game or application, it would appear in their Wii Menu or SD Card Menu as a new channel. WiiWare was a companion to the Virtual Console, which specializes in emulated games originally developed for other systems instead of original games.

WiiWare was promoted as an avenue for developers with small budgets to release innovative, original, and smaller-scale games without the cost and risk of creating a title to be sold at retail (akin to Xbox Live Arcade and the PlayStation Store). The development kit cost around US$2000 and developers needed to be licensed with and approved by Nintendo. [1] According to Nintendo, the "remarkable motion controls will give birth to fresh takes on established genres, as well as original ideas that currently exist only in developers' minds". Nintendo handled all pricing options for the downloadable games. [2]

Unlike its portable equivalent DSiWare, WiiWare games are currently unavailable natively via the Nintendo eShop. However, WiiWare games were purchasable and fully playable on the Wii U console - the Wii's successor - via Wii Mode. Ever since the Wii U launched in November 2012 with its vastly improved Nintendo eShop digital distribution, in comparison to the DSiWare Shop, the Wii Shop Channel had very rarely seen brand new WiiWare releases. As of July 2014 [update] , the Wii Shop Channel has received the global release of Retro City Rampage (February 2013), the global re-release of a retail Wii game called Deer Drive Legends (November 2013), [3] [4] and the North American re-release of a retail Wii game called Karaoke Joysound (July 2014). [5]

On September 29, 2017, with the announcement of the Wii Shop Channel being closed on January 30, 2019, [6] [7] the WiiWare games on the Wii (as well as the backwards compatibility on the Wii U) can no longer be purchased. Until further notice, users can continue to re-download and/or transfer WiiWare titles.

"Apple have had such massive success in capturing media attention - they've sucked all of the air out of it, I don't know that Nintendo's putting a great deal of energy into trying to generate PR for WiiWare or DSiWare." [19]

Other developers have criticised the 40MB size limit imposed on games on the service; the WiiWare version of Super Meat Boy was cancelled after the developer refused to compromise on quality in order to pass under the size limit. [20] Trent Oster of Beamdog, who released MDK2 on the service also criticised the file size limit, in addition to the lengthy certification process and the minimum sales requirement of 6,000 units before receiving any payment from Nintendo. [21] [22] For Brian Provinciano, the developer of Retro City Rampage , the threshold was 5,000 units, which the game failed to hit. [23] 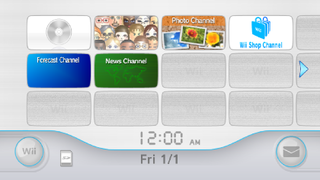 The Wii Menu is the graphical shell of the Wii game console, as part of the Wii system software. It has four pages, each with a 4:3 grid, and each displaying the current time and date. Available applications, known as "channels", are displayed and can be navigated using the pointer capability of the Wii Remote. The grid is customizable; users can move channels among the menu's 47 customizable slots by pressing and holding the A and B button while hovering over the channel the user wants to move. By pressing the plus and minus buttons on the Wii Remote users can scroll across accessing empty slots. 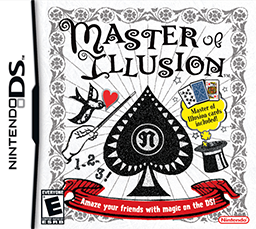 Master of Illusion, known in Europe as Magic Made Fun: Perform Tricks That Will Amaze Your Friends! and in Japan as Magic Encyclopedia, is a magician video game for the Nintendo DS. It was developed by Tenyo and Eighting and published by Nintendo, released in Japan on November 16, 2006, November 26, 2007 in North America and March 14, 2008 in Europe. Around 9 of its magic tricks were released as separate pieces of DSiWare.

The Wii Shop Channel was an online shop for the Wii video game console that allowed users to download Virtual Console games, WiiWare games, and additional channels. The channel launched on November 19, 2006, and ceased operations on January 30, 2019. Available software was organized into three sections: Virtual Console, WiiWare, and Wii Channels. It is now impossible to purchase content on the channel, but all previously purchased content can still be re-downloaded indefinitely as of February 1, 2019. Upon its discontinuation, most software was removed from the channel, and the shop's interface reverted to its original 2006 design and layout. 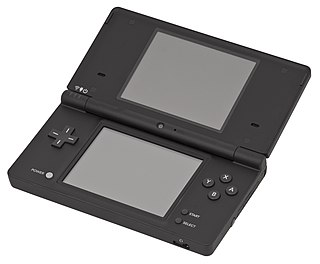 WarioWare: Snapped! is a minigame compilation party video game developed by Nintendo SPD Group No.1 and Intelligent Systems and published by Nintendo for the Nintendo DSi's DSiWare digital distribution service, and is part of the WarioWare series of video games. It is the sixth game in the series. It was released for Nintendo's DSiWare service, which started at the launch of the DSi on April 5, 2009 in North America.

Brain Age Express are three educational puzzle video games developed by Nintendo for the Nintendo DSi's DSiWare download service. They are the third series of games in the Brain Age series, and are repackaged versions of both Brain Age: Train Your Brain in Minutes a Day! and Brain Age 2: More Training in Minutes a Day! games, featuring both old and new puzzles. There are three editions: Arts & Letters, Math, and Sudoku. The Arts & Letters and Math versions were released on December 24, 2008 in Japan as launch titles for the DSiWare service, and the Sudoku edition on April 22, 2009 in Japan as well. The Math edition is the only version available outside Japan, and was released on April 5, 2009 in North America and June 19, 2009 in the PAL regions, as a launch title for the service. However, the Arts & Letters edition was released on August 10, 2009 in North America and October 23, 2009 in the PAL regions. The puzzles featured in both the Literature and Science editions were created by Ryuta Kawashima. One puzzle in each of these two editions utilizes the Nintendo DSi's camera function, while both versions allow players to use a photo for their in-game profile. On June 19, 2015, Brain Age Express: Sudoku was pulled from the DSi Shop and 3DS eShop, with no official reason given. Brain Age Express: Math and Brain Age Express: Arts & Letters are pre-installed on North American Nintendo DSis.

The Nintendo DSi system software is a set of updatable firmware versions, and a software frontend on the Nintendo DSi video game console. Updates, which are downloaded via the system's Internet connection, allow Nintendo to add and remove features and software. All updates also include all changes from previous updates.

Karaoke Joysound Wii is a karaoke video game by Hudson Soft for Wii. It licenses the Joysound online song library from Japanese karaoke service provider Xing, who also helped co-develop the game with Hudson. The game was originally released in a retail package with an included USB microphone on December 18, 2008 in Japan, and was later released there as a downloadable WiiWare game on July 28, 2009. 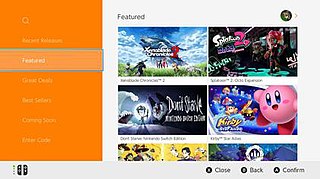 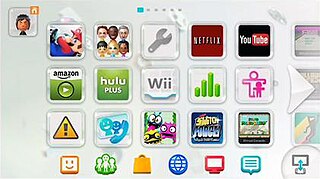 The Wii U system software is the official firmware version and operating system for Nintendo's Wii U home video game console. Nintendo maintains the Wii U's systemwide features and applications by offering system software updates via the Internet. Updates are optional to each console owner, but may be required in order to retain interoperability with Nintendo's online services. Each update is cumulative, including all changes from previous updates.

The Nintendo DS family is a family of handheld game consoles developed, manufactured, released and marketed by Nintendo.