The 1908 World Series matched the defending champion Chicago Cubs against the Detroit Tigers in a rematch of the 1907 Series. In this first-ever rematch of this young event, the Cubs won in five games for their second straight World Series title. (Sites: game 1 in Detroit; games 2, 3 in Chicago; games 4, 5 in Detroit.)

The 1908 World Series was significant for being the last World Series championship the Cubs would win until the 2016 World Series (108 years later). Before the 2016 series, the team would go on to appear in seven World Series; in 1910, 1918, 1929, 1932, 1935, 1938, and 1945, losing each time. The Cubs had been one of baseball's most dominant teams in the early 1900s. This was the year of the infamous "Merkle's Boner" play that allowed the Chicago Cubs to reach the World Series after beating the New York Giants (now the San Francisco Giants) in a one-game "playoff", actually the makeup game for the tie that the Merkle play had caused.

The Series was anticlimactic after tight pennant races in both leagues. Ty Cobb had a much better World Series than in the previous year, as did the rest of his team. The final two games, held in Detroit, were shutouts. This was also the most poorly attended World Series in history, with the final game drawing a record-low 6,210 fans. Attendance in Chicago was harmed by a ticket-scalping scheme that fans accused the club's owner of participating in, and the World Series was boycotted to some degree.

For the first time, four umpires were used in the series, in alternating two-man teams.

The Tigers struck first in Game 1 when Matty McIntyre singled to lead off the bottom of the first off of Ed Reulbach, stole second and scored on Ty Cobb's two-out single, but the Cubs responded in the third off of Ed Killian when after a leadoff double and single, Frank Schulte's RBI single tied the game. After a bunt groundout, Harry Steinfeldt's RBI single put Chicago up 2–1. After a walk, Ed Summers relieved Killian and allowed an RBI groundout to Joe Tinker and Johnny Kling reached on an error that allowed another run to score. The Cubs added another run in the seventh on Steinfedlt's sacrifice fly. In the bottom of the inning, with runners on second and third, Boss Schmidt's groundout, Red Downs's ground-rule double, and Summers's single scored a run each. Next inning, Claude Rossman's two-run single off of Mordecai Brown put the Tigers up 6–5. In the top of the ninth, three straight one-out singles loaded the bases before Solly Hofman's single scored two and Joe Tinker's bunt single scored another. After a double steal, Johnny King's two-run single put the Cubs up 10–6. Brown pitched a scoreless bottom of the ninth despite allowing a single and walk as the Cubs went up 1–0 in the series.

A scoreless tie in the bottom of the eighth came to an end when Joe Tinker's two-run homer launched a six-run Cub outburst. After a ground-rule double and groundout, RBI singles by Jimmy Sheckard and Johnny Evers and an RBI triple by Frank Schulte (the last two hits coming off after stolen bases) scored a run each. A wild pitch to Frank Chance scored the Cubs' last run. The Tigers avoided a shutout in the ninth when Davy Jones drew a leadoff walk, moved to second on a groundout and scored on Ty Cobb's single. Orval Overall's complete-game win took just 90 minutes.

Monday, October 12, 1908, at West Side Grounds in Chicago, Illinois

It was in this game that Ty Cobb enjoyed the finest World Series outing he ever had. The 21-year-old Georgian rapped three singles and a double in five at-bats, and stole two bases. In the top of the ninth, he singled and promptly stole second and third, but then the hyped-up boy wonder pressed his luck and was thrown out trying to steal home. This was the only Tiger win in their back-to-back first two World Series losses to the Cubs. Detroit struck first in the top of the first when Charley O'Leary hit a one-out single, moved to second on a groundout and scored on Ty Cobb's single. The Cubs responded in the fourth on Frank Chance's RBI single. After stealing second, an error on Harry Steinfeldt's ground ball and Solly Hofman's triple scored a run each. In the top of the sixth, after a single and walk, singles by Sam Crawford, Ty Cobb, and Claude Rossman scored a run each. After a double play, Ira Thomas's RBI double made it 6–3 Tigers. They added two more runs in the eighth on Bill Coughlin's bases loaded sacrifice fly followed by George Mullin's RBI single.

This one was over in 95 minutes. RBI singles by Harry Steinfeldt and Solly Hofman in the third inning after two walks gave Mordecai Brown all the support he'd need. Brown allowed only four hits and walked none. The Cubs added another run in the ninth when Frank Chance reached on an error with two on.

The attendance during this last game of the 1908 World Series (6,210) was the smallest crowd in Series history.

Overall allowed only three hits, walking four and striking out 10 for his second win of the series. In 18.1 innings, he allowed only seven hits and two runs for an ERA of 0.98. During the 1st, Overall pitched an immaculate inning.

The Cubs scored the game's first run in the first on three straight one-out singles, the last of which to Frank Chance scoring a run, then added another run in the fifth on Johnny Evers's double after two walks.

This was also the first World Series game in which neither team committed an error.

The Cubs would not win another World Series title until finally reclaiming the crown in 2016.

The 1945 World Series matched the American League Champion Detroit Tigers against the National League Champion Chicago Cubs. The Tigers won the Series in seven games, giving them their second championship and first since 1935.

The 1984 World Series was the championship series of Major League Baseball's (MLB) 1984 season. The 81st edition of the World Series, it was a best-of-seven playoff played between the American League (AL) champion Detroit Tigers and the National League (NL) champion San Diego Padres. The Tigers won the series, four games to one. This was the city of Detroit's first sports championship since the Tigers themselves won the 1968 World Series. 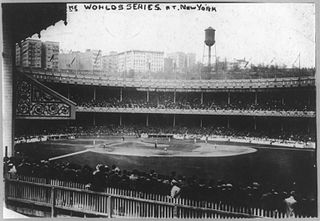 The 1935 World Series featured the Detroit Tigers and the Chicago Cubs, with the Tigers winning in six games for their first championship in five Series appearances. They had lost in 1907, 1908, 1909, and 1934.

The 1940 World Series matched the Cincinnati Reds against the Detroit Tigers, with the Reds winning a closely contested seven-game series. The victory secured the Reds the second championship in their franchise history and came 21 years after their victory over the scandal-tainted Chicago White Sox in 1919. This would be the Reds' last World Series championship for 35 years despite appearances in 1961, 1970, and 1972. Meanwhile, Bill Klem worked the last of his record 18 World Series as an umpire.

The 1948 World Series saw the Cleveland Indians against the Boston Braves. The Braves had won the National League pennant for the first time since the "Miracle Braves" team of 1914, while the Indians had spoiled a chance for the only all-Boston World Series by winning a one-game playoff against the Boston Red Sox for the American League flag. Though superstar pitcher Bob Feller failed to win either of his two starts, the Indians won the Series in six games to capture their second championship and their first since 1920.

The 1907 World Series featured the Chicago Cubs and the Detroit Tigers, with the Cubs winning the Series four games to none for their first championship. Games 1, 2, 3 were played in Chicago; games 4 and 5 were played in Detroit. 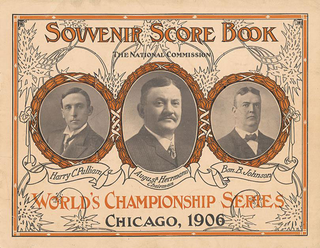 The 1906 World Series featured a crosstown matchup between the Chicago Cubs, who had posted the highest regular-season win total (116) and winning percentage (.763) in the major leagues since the advent of the 154-game season; and the Chicago White Sox. The White Sox, known as the "Hitless Wonders" after finishing with the worst team batting average (.230) in the American League, beat the Cubs in six games for one of the greatest upsets in Series history. This was the first World Series played by two teams from the same metropolitan area. 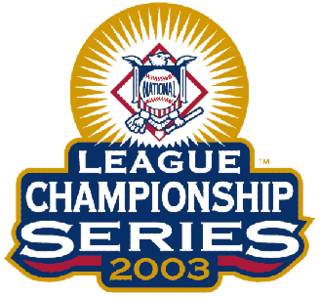 The 2003 National League Championship Series (NLCS) was a Major League Baseball playoff series played from October 7 to 15 to determine the champion of the National League, between the Central Division champion Chicago Cubs and the wild-card qualifying Florida Marlins. The Cubs, by virtue of being a division winner, had the home field advantage. The Marlins came back from a three games to one deficit and won the series in seven games, advancing to the World Series against the New York Yankees, whom they defeated in six games.

The 1984 American League Championship Series matched the East Division champion Detroit Tigers against the West Division champion Kansas City Royals. The Tigers took the series in a three-game sweep to advance to the 1984 World Series against the San Diego Padres. The series was the 16th ALCS in all and the last to be played as a best-of-five. In 1985, the League Championship Series changed to a best-of-seven format.

The 2006 American League Championship Series (ALCS), the second round of the 2006 American League playoffs, began on October 10 and ended on October 14. The wild card Detroit Tigers swept the West Division champion Oakland Athletics 4 games to none to advance to the 2006 World Series, and became the fourth AL team to win 10 pennants, joining the New York Yankees (39), the Athletics (15), and the Boston Red Sox (11). Magglio Ordóñez's game-winning walk-off home run in the bottom of the 9th inning of Game 4 sealed the pennant for the Tigers. This ALCS marked the 5th different AL pennant winner in as many years.

The 1984 National League Championship Series was played between the San Diego Padres and the Chicago Cubs from October 2 to 7. San Diego won the series three games to two to advance to the World Series. It was the first postseason series ever for the Padres since the franchise's beginning in 1969, and the first appearance by the Cubs in postseason play since the 1945 World Series. Chicago took a 2–0 lead in the series, but San Diego prevailed after rebounding to win three straight, which contributed to the popular mythology of the "Curse of the Billy Goat" on the Cubs. The series was the 16th NLCS in all and the last to be played as a best-of-five. In 1985, the League Championship Series changed to a best-of-seven format. 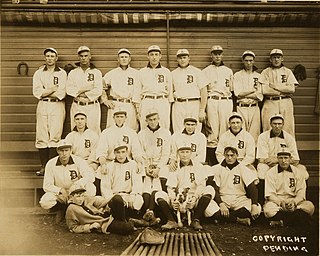