On 7 June 2021, before dawn, two trains collided near Daharki, in the Ghotki District of the southern province of Sindh in Pakistan, killing at least 65 people and injuring about 150 others. An express train derailed onto the opposite track, and a second express train crashed into the first roughly a minute later. [lower-alpha 1] About six to eight bogies were left "completely destroyed".

Locals rushed to the scene to rescue survivors, hindered by the darkness. The Pakistan Army, paramilitary Pakistan Rangers, an urban search and rescue team, helicopters, and accident relief trains later joined in the rescue efforts. An official investigation was ordered to establish the cause of the crash.

An initial investigation report determined that the initialderailment had been caused by the failure of a welding joint.

The Pakistani railway system had been plagued with problems that have accumulated over decades of decay. [5] [6] [7] Its signal system was poorly maintained, and much of its tracks were in a state of disrepair. [8] [9] [6] [10] Due to corruption and mismanagement, the railway system sees frequent accidents, and a lack of investment exacerbates issues. [6] [9] [7] [10] Although a number of governments have pledged to clean up the system, none have yet succeeded. [6] [10]

Prime Minister Imran Khan had also promised to modernize the railways, but accidents had continued to occur since he took office in 2018, including a train fire in 2019 that killed more than 70 people. [6] The system had seen little maintenance in recent years, while The Express Tribune reported that "deadly train accidents ... seem to have increased in frequency". [9] [10] [11]

Habibur Rehman Gilani, chairman of Pakistan Railways, stated that the tracks around the site of the accident were old and needed to be replaced. [12] A former official has stated that some railway segments are still using tracks that had been laid before independence in 1947. [7]

Ghotki deputy commissioner Usman Abdullah stated that 13 or 14 bogies had derailed due to the accident, and 6 to 8 of them had been "completely destroyed". [21]

The collision killed at least 65 people and injured about 150 more. [2] [3] Four railway employees were among those killed. [16] Umar Tufail, head of the Ghotki District police, stated that up to 25 people remained trapped in the wreckage. [16]

Locals quickly rushed to the scene during the night to assist survivors, though darkness hindered their efforts. [12] [16] As daylight broke, authorities were still attempting to bring heavy machinery to the scene. [12] The driver of the Sir Syed Express, who had been slightly injured, was rescued by locals two hours after the accident. [7] [12]

Also taking part in the rescue efforts were the Pakistan Army and paramilitary Pakistan Rangers, including military doctors, paramedics, and ambulances. [12] [7] [16] A specialist urban search and rescue team was airlifted from Rawalpindi to assist in the operation. [7] [16] Two helicopters from Multan were flown in to evacuate victims. [7] Accident relief trains arrived from Sadiqabad and Rohri with heavy machinery and rescue teams. [2] The afternoon heat also hampered rescue efforts, with temperatures as high as 44 °C (111 °F) being reported. [23]

Casualties were transported to hospitals in Daharki, Ghotki, Mirpur Mathelo, and Ubauro, where emergencies were declared. [7] Seriously injured victims were airlifted to Pano Aqil. [16] [24]

Prime Minister Imran Khan stated that he was "shocked by the horrific train accident" and ordered an investigation. [25] Federal Minister for Railways Azam Khan Swati stated that a "high-level inquiry" has been ordered to determine how the collision occurred, adding that it was unclear if the accident was a result of sabotage or the track's poor quality. [6]

An initial investigation report stated that the failure of a welding joint on the right side of the northbound tracks caused the derailment of the Millat Express. [26] Data were being retrieved from the black boxes of the two train engines for the final report. [26] 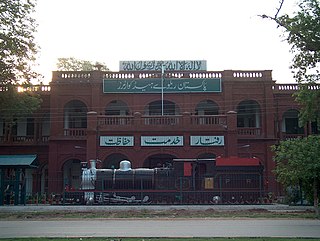 Pakistan Railways is the national, state-owned railway company of Pakistan. Founded in 1861 and headquartered in Lahore, it owns 7,791 kilometres of track across Pakistan from Torkham to Karachi, offering both freight and passenger services.

The Ghotki rail crash occurred on 13 July 2005, at around 3:40am local time near Ghotki, Pakistan. No. 24 Dn train stopped at the station of Sarhad was hit from behind by the following Karachi Express train, causing several cars to derail; these were then hit by a third train running in the opposite direction (Tezgam). A total of seventeen train cars, carrying over 3000 passengers, were wrecked. Estimates of the death toll ranged as high as over 130. It was the worst train accident in Pakistan in fifteen years.

The Penukonda train collision occurred in the early hours of 22 May 2012, when the Bangalore bound Hampi Express crashed into a stationary freight train near Penukonda, in the Indian state of Andhra Pradesh. The incident killed 25 people while 43 people were injured. Three coaches derailed as a result of the crash while another caught fire. The fire was brought under control and rescue and relief operations started in a couple of hours. Railway Minister Mukul Roy, who was in Kolkata, rushed to the site of the accident and ordered an inquiry into it. Early reports suggested that Hampi Express overshot a signal and collided with a stationary goods train. Roy also announced a compensation of Rs 500,000 to the next of kin of the deceased, Rs 100,000 for those who sustained grievous injuries and Rs 50,000 to those who received minor injuries. 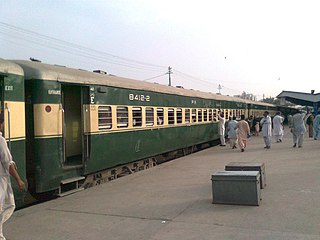 Karachi Express is a passenger train operated daily by Pakistan Railways between Karachi and Lahore. The trip takes approximately 18 hours and 30 minutes to cover a published distance of 1,214 kilometres (754 mi), traveling along a stretch of the Karachi–Peshawar Railway Line. 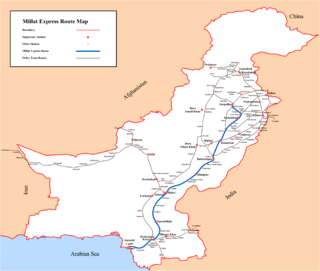 Millat Express is a passenger train operated daily by Pakistan Railways between Karachi and Lalamusa in Malakwal. The trip takes approximately 21 hours, 30 minutes to cover a published distance of 1,326 kilometres (824 mi), traveling along a stretch of the Karachi–Peshawar Railway Line, Khanewal–Wazirabad Branch Line and Shorkot–Lalamusa Branch Line. 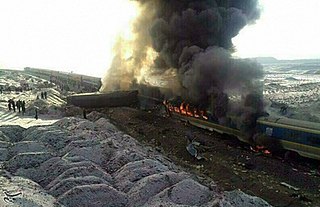 Two trains collided on the main line in Semnan Province between Semnan and Damghan, Iran, on 25 November 2016, resulting in 49 deaths and 103 injuries. There were reported difficulties with the rescue operation due to the incident's remote location 4 km from the nearest station, Haft-Khan, and because only one helicopter could reach the scene immediately to join the rescue operation. It was the deadliest rail disaster in Iran since the Nishapur train disaster in 2004.