Last updated January 22, 2022
This article is about the video game series. For the first game in the series, see 3-D Ultra Pinball (video game).

3-D Ultra Pinball is a series of pinball computer games developed by Sierra Entertainment's Dynamix. The games try to escape from the traditional, arcade pinball and feature animation, more than one table at once, and "temporary targets" (such as spaceships, goblins and dinosaurs appearing throughout the table).

The original 3-D Ultra Pinball game was released in 1995. This game is based on the space simulation game, Outpost. There are three tables named Colony, Command Post, and Mine. Each table holds a set of five challenges. Smaller "mini-tables" are featured with their own set of flippers. The goal is to build and launch a Starship completing the game's entire course.

The second game, Creep Night (1996) had a horror film set, and 3 different tables (and after finishing all challenges in a table, the player could travel to the other ones):

After finishing all the 3 tables, comes a changed Castle table, with 5 new challenges.

This was also released with several demos of other software titles also by Sierra Online.

Lost Continent (1997) had a Jurassic Park-like set. It followed a storyline, in which a plane falls on an island where an evil genius, Heckla, has created dinosaurs of other animals and the cavemen who live there. Professor Spector, his assistant Mary, and adventurer Rex Hunter try to escape back to the modern world, rescue Neeka (a tribal woman) and stop Heckla and his army of robots.

It has no challenges but features 16 tables, divided in 3 "sectors": Jungle, Temple and Chambers (Heckla's Lab).

As the title reads, it is a NASCAR-themed pinball, released in 1998.

The game only has 3 fields: garage, track and pitstop.

It features several famous NASCAR drivers like Dale Earnhart and Bobby Labonte as playable characters, but the choice affects only audio commentaries and field decorations.

Power (1999) was a compilation released in 1999, featuring the first game, Creep Night and Lost Continent, and as a bonus, The Incredible Machine and a demo of 3-D Ultra Golf.

The final title of the series, Thrill Ride (1999) also received a Game Boy Color version, which was developed by Left Field Productions and released by Sierra in December 2000.

The PC version was included in Sierra's Game Room for the PC in 2004. It is set in Hersheypark with rides and theme park elements as puzzles and table features.

Thrill Ride has one primary table, which doubles as a region for Fun Zone puzzles, and a secondary Thrill Zone table to one side. There are two multiball ramps, one a roller coaster (the Wildcat) and one a water ride (the Coal Cracker). Two of the Fun Zone puzzles send the players to secondary tables, a River Rafting table and a Lightning Racer Virtual Coaster.

General play proceeds as the player completes the six trials—completing 5 Fun Zone puzzles, completing 5 Thrill Zone puzzles, getting Thrill points (the letters spelling THRILLRIDE) in order to activate and complete the Nighttime Fantasy puzzle. Going on all the rides (activating all 10 zone puzzles), activating both multiballs, and frequently visiting the Snack Bar sinker are also needed to complete General play. Completing all six trials activates a "Lights Out" puzzle, breaking light bulbs with the ball; when this is done the table goes into Nighttime Fantasy Multiball mode before resetting the table (play continues, and multiple Lights Out are possible).

In addition, there are a number of other minor tasks and rewards (hitting markers to activate the Fun Zone sinker, etc.) and a Hershey's Hide and Seek for hitting the Snack Bar 50 times, in which a number of animated treats hide around the primary table and must be caught with the ball.

A glossary of terms, commonly used in discussing pinball machines. 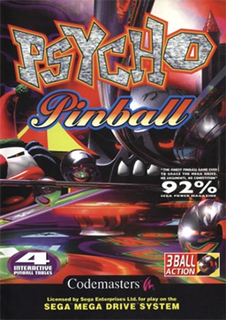 Psycho Pinball is a 1994 pinball video game published and developed by Codemasters, released for the Mega Drive in the United Kingdom, and MS-DOS in the United States and Europe.

Medieval Madness is a Williams pinball machine released in June 1997. Designed by Brian Eddy and programmed by Lyman Sheats, it had a production run of 4,016 units. It is often regarded by many to be the greatest pinball machine of all time.

The Addams Family, is a pinball machine released in March 1992. It was designed by Pat Lawlor and Larry DeMar and released by Midway. It was based on the 1991 film of the same name, and features custom speech by the stars of the film, Anjelica Huston and Raul Julia. It is the best-selling solid state pinball machine of all time with 20,270 units sold. 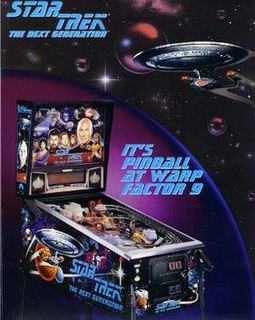 Star Trek: The Next Generation is a widebody pinball game, designed by Steve Ritchie and released in November 1993 by Williams Electronics. It was part of WMS' SuperPin series, and was based on the TV series. It is the only pinball machine that features three separate highscore-lists. Apart from the regular highscore-list and the buy-in-list, it also features a reminiscence to The Machine: Bride of Pin*Bot billionaires club. It is also the third pinball game overall based on the Star Trek franchise, following the 1979 pinball game by Bally, and the 1991 game by Data East, and preceding the 2013 pinball game by Stern.

Twilight Zone is a widebody pinball machine, designed by Pat Lawlor and based on the TV series of the same name. It was first released in 1993 by Midway. This game is part of WMS' SuperPin line of widebody games alongside Star Trek: The Next Generation and Indiana Jones: The Pinball Adventure.

Cirqus Voltaire is a 1997 pinball game, designed by John Popadiuk and released by Williams Electronics Games. The theme involves the player performing many different marvels in order to join the circus. Some of the game's distinctive features include a neon light running along the right-hand ramp, a pop bumper that rises up from the middle of the playfield at certain times, and a magnet at the top of the left ramp that can catch balls and divert them into the locks. The most notable feature is the Ringmaster, a head that rises at certain times and taunts the player.

Attack from Mars is a 1995 pinball game designed by Brian Eddy, and released by Midway. 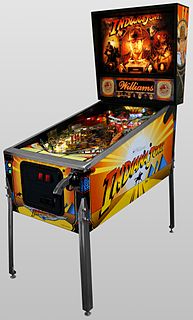 Indiana Jones: The Pinball Adventure is a 1993 widebody pinball game designed by Mark Ritchie and released by Williams. It was based on the Indiana Jones movies. It was also part of WMS' SuperPin series of widebody games.

Fish Tales is a fishing-themed pinball game released by Williams in 1992. It is one of the top 20 most produced pinball machines of all time, selling more than 13,000 units.

Doctor Who is a pinball machine designed by Bill Pfutzenreuter (Pfutz) and Barry Oursler, and released by Midway in September 1992. It is based on the television series Doctor Who. As stated in the Gameplay section, the rulesheet is rather different from other pinball machines released at the time, which didn't help popularity as casual players did not understand the complex rule changes that occur during the game.

Mr.Space Jam is a 1996 pinball machine released by Sega Pinball. It is based on the film of the same name.

Monster Bash is a pinball machine produced by Williams. The game features some Universal Monsters including The Creature from the Black Lagoon, The Wolf Man, Frankenstein's monster, the Bride of Frankenstein, Dracula and The Mummy.

White Water is a 1993 pinball game designed by Dennis Nordman and released by Williams. The theme is based on white water rafting, which is reflected in the game's 'wild' ramps and very fast game-play.

FunHouse is a pinball machine designed by Pat Lawlor and released in November 1990 by Williams Electronics. Starring a talking ventriloquist dummy named Rudy, the game is themed after the concept of an amusement park funhouse. FunHouse is one of the last Williams games to use an alphanumeric display; the company switched to dot matrix the following year.

The Who's Tommy Pinball Wizard is a pinball machine based on the rock musical The Who's Tommy. The machine features twenty-one songs from the musical sung by original Broadway cast members. The game was designed by Joe Kaminkow, Ed Cebula, Lonnie D. Ropp, and Lyman F. Sheats Jr.. The machine was built using Solid-state electronics type components. The backbox of the machine has a dot matrix display with animations by Kurt Andersen and Markus Rothkranz. 4,700 machines were manufactured by Data East in January 1994.

Judge Dredd is a four-player pinball game produced by Bally Manufacturing in 1993, based on the British comic strip Judge Dredd in 2000 AD. Nearly 7,000 were made.

Hurricane is a pinball machine released by Williams Electronics in August 1991. It was designed by Barry Oursler as the third game in Oursler's amusement park themed pinball trilogy. The first being Comet, released in 1985, and the second being Cyclone, released in 1988.