Minerva (minor planet designation: 93 Minerva) is a large trinary main-belt asteroid. It is a C-type asteroid, meaning that it has a dark surface and possibly a primitive carbonaceous composition. It was discovered by J. C. Watson on 24 August 1867, and named after Minerva, the Roman equivalent of Athena, goddess of wisdom. An occultation of a star by Minerva was observed in France, Spain and the United States on 22 November 1982. An occultation diameter of ~170 km was measured from the observations. Since then two more occultations have been observed, which give an estimated mean diameter of ~150 km for diameter. [6] [7]

A minor-planet moon is an astronomical object that orbits a minor planet as its natural satellite. As of June 2021, there are 429 minor planets known or suspected to have moons. Discoveries of minor-planet moons are important because the determination of their orbits provides estimates on the mass and density of the primary, allowing insights of their physical properties that is generally not otherwise possible.

216 Kleopatra is a metallic, ham-bone-shaped asteroid and trinary system orbiting in the central region of the asteroid belt, equivalent to approximately 120 kilometers in diameter. It was discovered on 10 April 1880, by Austrian astronomer Johann Palisa at the Austrian Naval Pola Observatory, in what is now Pula, Croatia. The M-type asteroid has a shorter than average rotation period of 5.4 hours. It was named after Cleopatra, the famous Egyptian queen. Two small minor-planet moons were discovered in 2008, and later named Alexhelios and Cleoselene.

Daphne is a large asteroid from the asteroid belt. It is a dark-surfaced body 174 km in diameter is probably composed of primitive carbonaceous chondrites. The spectra of the asteroid displays evidence of aqueous alteration. It was discovered by H. Goldschmidt on May 22, 1856, and named after Daphne, the nymph in Greek mythology who was turned into a laurel tree. Incorrect orbital calculations initially resulted in 56 Melete being mistaken for a second sighting of Daphne. Daphne was not sighted again until August 31, 1862.

47 Aglaja is a large, dark main belt asteroid. It was discovered by Robert Luther on 15 September 1857 from Düsseldorf. The name was chosen by the Philosophical Faculty of the University of Bonn and refers to Aglaea, one of the Charites in Greek mythology. It was rendered Aglaia in English sources into the early 20th century, as 'i' and 'j' are equivalent in Latin names and in the Latin rendering of Greek names.

Alexandra is a carbonaceous asteroid from the intermediate asteroid belt, approximately 155 kilometers in diameter. It was discovered by German-French astronomer Hermann Goldschmidt on 10 September 1858, and named after the German explorer Alexander von Humboldt; it was the first asteroid to be named after a male.

Sylvia is the 8th-largest asteroid in the asteroid belt. It is the parent body of the Sylvia family and member of Cybele group located beyond the main asteroid belt. Sylvia was the first asteroid known to possess more than one moon.

Lachesis is a large main-belt asteroid. It was discovered by French astronomer Alphonse Borrelly on April 10, 1872, and independently by German-American astronomer Christian Heinrich Friedrich Peters on April 11, 1872, then named after Lachesis, one of the Moirai, or Fates, in Greek mythology. A Lachesean occultation of a star occurred in 1999 and was confirmed visually by five observers and once photoelectrically, with the chords yielding an estimated elliptical cross-section of 184 × 144 km. 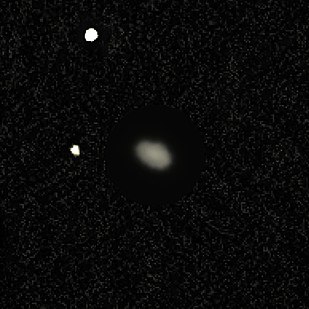 Elektra is a large outer main-belt asteroid. It was discovered on 17 February 1873, by astronomer Christian Peters at Litchfield Observatory, New York, and named after Electra, an avenger in Greek mythology.

Sophrosyne is a large main-belt asteroid that was discovered by German astronomer Robert Luther on 27 September 1873, and was named after the concept of sophrosyne, Plato's term for 'moderation'. Classified as a C-type asteroid, it has an exceedingly dark surface and most probably a primitive carbonaceous composition.

Adeona is a large asteroid from the intermediate asteroid belt, approximately 150 kilometers in diameter. Its surface is very dark, and, based upon its classification as a C-type asteroid, is probably composed of primitive carbonaceous material. The spectra of the asteroid displays evidence of aqueous alteration. The Adeona family of asteroids is named after it.

Urda is a main-belt asteroid that was discovered by German-American astronomer Christian Heinrich Friedrich Peters on August 28, 1876, in Clinton, New York, and named after Urd, one of the Norns in Norse mythology. In 1905, Austrian astronomer Johann Palisa showed that the asteroid varied in brightness.

Prokne is a main-belt asteroid that was discovered by German-American astronomer C. H. F. Peters on March 21, 1879, in Clinton, New York, and named after Procne, the sister of Philomela in Greek mythology. Stellar occultations by Prokne have been observed twice, in 1984 from Italy and again in 1999 from Iowa.

Ampella is a Main belt asteroid that was discovered by Alphonse Borrelly on June 13, 1879. The name seems to be the feminine form of Ampelos, a satyr and good friend of Dionysus in Greek mythology. It could also derive from the Ampelose, a variety of hamadryad. It is an S-type asteroid.

Liguria is a very large main-belt asteroid that was discovered by Auguste Charlois on January 21, 1893, in Nice. It is one of seven of Charlois's discoveries that was expressly named by the Astromomisches Rechen-Institut, and was named for the Italian region.

Palma is one of the largest main-belt asteroids. It is a B-type asteroid.

Selene is a minor planet orbiting the Sun in the asteroid belt. The name Selene is that of an ancient Greek goddess of the Moon. The name may have been inspired by the asteroid's provisional designation 1905 SE.