Active asteroids are small Solar System bodies that have asteroid-like orbits but show comet-like visual characteristics. That is, they show comae, tails, or other visual evidence of mass-loss (like a comet), but their orbit remains within Jupiter's orbit (like an asteroid). [1] [2] These bodies were originally designated main-belt comets (MBCs) in 2006 by astronomers David Jewitt and Henry Hsieh, but this name implies they are necessarily icy in composition like a comet and that they only exist within the main-belt, whereas the growing population of active asteroids shows that this is not always the case. [1] [3] [4]

The first active asteroid discovered is 7968 Elst–Pizarro. It was discovered (as an asteroid) in 1979 but then was found to have a tail by Eric Elst and Guido Pizarro in 1996 and given the cometary designation 133P/Elst-Pizarro. [1] [5]

Unlike comets, which spend most of their orbit at Jupiter-like or greater distances from the Sun, active asteroids follow orbits within the orbit of Jupiter that are often indistinguishable from the orbits of standard asteroids. Jewitt defines active asteroids as those bodies that, in addition to having visual evidence of mass loss, have an orbit with: [2]

The first three identified active asteroids all orbit within the outer part of the asteroid belt. [6]

Some active asteroids display a cometary dust tail only for a part of their orbit near perihelion. This strongly suggests that volatiles at their surfaces are sublimating, driving off the dust. [9] Activity in 133P/Elst–Pizarro is recurrent, having been observed at each of the last three perihelia. [1] The activity persists for a month or several [6] out of each 5-6 year orbit, and is presumably due to ice being uncovered by minor impacts in the last 100 to 1000 years. [6] These impacts are suspected to excavate these subsurface pockets of volatile material helping to expose them to solar radiation. [6]

When discovered in January 2010, P/2010 A2 (LINEAR) was initially given a cometary designation and thought to be showing comet-like sublimation, [10] but P/2010 A2 is now thought to be the remnant of an asteroid-on-asteroid impact. [11] [12] Observations of 596 Scheila indicated that large amounts of dust were kicked up by the impact of another asteroid of approximately 35 meters in diameter.

P/2013 R3 (CATALINA-PANSTARRS) was discovered independently by two observers by Richard E. Hill using the Catalina Sky Survey's 0.68-m Schmidt telescope and by Bryce T. Bolin using the 1.8-m Pan-STARRS1 telescope on Haleakala. [13] The discovery images taken by Pan-STARRS1 showed the appearance of two distinct sources within 3" of each other combined with a tail enveloping both sources. In October 2013, follow-up observations of P/2013 R3, taken with the 10.4 m Gran Telescopio Canarias on the island of La Palma, showed that this comet was breaking apart. [14] Inspection of the stacked CCD images obtained on October 11 and 12 showed that the main-belt comet presented a central bright condensation that was accompanied on its movement by three more fragments, A,B,C. The brightest A fragment was also detected at the reported position in CCD images obtained at the 1.52 m telescope of the Sierra Nevada Observatory in Granada on October 12. [14]

NASA reported on a series of images taken by the Hubble Space Telescope between October 29, 2013 and January 14, 2014 that show the increasing separation of the four main bodies. [15] The Yarkovsky–O'Keefe–Radzievskii–Paddack effect, caused by sunlight, increased the spin rate until the centrifugal force caused the rubble pile to separate. [15]

Some active asteroids show signs that they are icy in composition like a traditional comet, while others are known to be rocky like an asteroid. It has been hypothesized that main-belt comets may have been the source of Earth's water, because the deuterium–hydrogen ratio of Earth's oceans is too low for classical comets to have been the principal source. [16] European scientists have proposed a sample-return mission from a MBC called Caroline to analyse the content of volatiles and collect dust samples. [9]

Identified members of this morphology class include:

Castalia is a proposed mission concept for a robotic spacecraft to explore 133P/Elst–Pizarro and make the first in situ measurements of water in the asteroid belt, and thus, help solve the mystery of the origin of Earth's water. [50] The lead is Colin Snodgrass, from The Open University in the UK. Castalia was proposed in 2015 and 2016 to the European Space Agency within the Cosmic Vision programme missions M4 and M5, but it was not selected. The team continues to mature the mission concept and science objectives. [50] Because of the construction time required and orbital dynamics, a launch date of October 2028 was proposed. [50]

On January 6, 2019, the OSIRIS-REx mission first observed episodes of particle ejection from 101955 Bennu shortly after entering orbit around the near-Earth asteroid, leading it to be newly classified as an active asteroid and marking the first time that asteroid activity had been observed up close by a spacecraft. It has since observed at least 10 other such events. [3] The scale of these observed mass loss events is much smaller than those previously observed at other active asteroids by telescopes, indicating that there is a continuum of mass loss event magnitudes at active asteroids. [31] 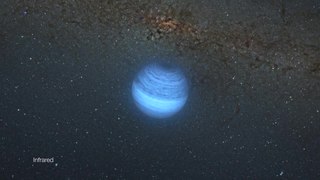 A rogue planet is an interstellar object of planetary-mass, therefore smaller than fusors and without a host planetary system. Such objects have been ejected from the planetary system in which they formed or have never been gravitationally bound to any star or brown dwarf. The Milky Way alone may have billions to trillions of rogue planets, a range the upcoming Nancy Grace Roman Space Telescope will likely be able to narrow down. 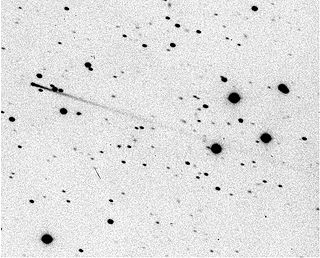 Comet Elst–Pizarro is a body that displays characteristics of both asteroids and comets, and is the prototype of active asteroids. Its orbit keeps it within the asteroid belt, yet it displayed a dust tail like a comet while near perihelion in 1996, 2001, and 2007.

3200 Phaethon, provisional designation 1983 TB, is an active Apollo asteroid with an orbit that brings it closer to the Sun than any other named asteroid. For this reason, it was named after the Greek myth of Phaëthon, son of the sun god Helios. It is 5.8 km (3.6 mi) in diameter and is the parent body of the Geminids meteor shower of mid-December. With an observation arc of 35+ years, it has a very well determined orbit. The 2017 Earth approach distance of about 10 million km was known with an accuracy of ±700 m.

Zerlina, provisional designation 1904 NW, carbonaceous Palladian asteroid from the central region of the asteroid belt, approximately 18 kilometers in diameter. It was discovered by German astronomer Max Wolf at the Heidelberg-Königstuhl State Observatory on 12 April 1904. 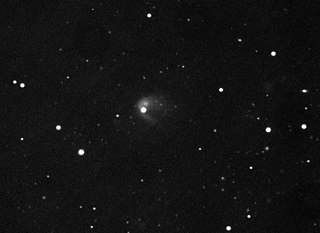 Scheila is a main-belt asteroid and main-belt comet orbiting the Sun. It was discovered on 21 February 1906 by August Kopff from Heidelberg. Kopff named the asteroid after a female English student with whom he was acquainted.

6433 Enya, provisional designation 1978 WC, is a stony background asteroid from the inner regions of the asteroid belt, approximately 7 kilometers in diameter. It was discovered on 18 November 1978, by Czech astronomer Antonín Mrkos at the Kleť Observatory in the Czech Republic. It was named for Irish musician Enya.

1117 Reginita is a stony background asteroid from the inner regions of the asteroid belt. It was discovered on 24 May 1927, by Catalan astronomer Josep Comas i Solà at the Fabra Observatory in Barcelona, Spain, who named it after his niece. The bright S-type asteroid has a notably short rotation period of 2.9 hours and measures approximately 10 kilometers in diameter.

6349 Acapulco, provisional designation 1995 CN1, is a dark Adeonian asteroid from the middle region of the asteroid belt, approximately 22 kilometers in diameter.

2637 Bobrovnikoff, provisional designation A919 SB, is a background asteroid from the inner regions of the asteroid belt, approximately 6 kilometers in diameter. It was discovered on 22 September 1919, by German astronomer Karl Reinmuth at the Heidelberg-Königstuhl State Observatory in Heidelberg, Germany. The presumed spherical S-type asteroid has a rotation period of 4.79 hours. It is named after astronomer Nicholas Bobrovnikoff, who was the director of the Perkins Observatory in Ohio, United States.

1271 Isergina, provisional designation 1931 TN, is a carbonaceous background asteroid from the outer regions of the asteroid belt, approximately 45 kilometers in diameter. It was discovered on 10 October 1931, by Soviet astronomer Grigory Neujmin at the Simeiz Observatory on the Crimean peninsula. The asteroid was named after Crimean physician and friend of the discoverer, Pyotr Isergin.

1383 Limburgia, provisional designation 1934 RV, is a carbonaceous asteroid from the outer region of the asteroid belt, approximately 23 kilometers in diameter. It was discovered on 9 September 1934, by Dutch astronomer Hendrik van Gent at the Leiden Southern Station, annex to the Johannesburg Observatory in South Africa. It is named for the Dutch province Limburg.

4804 Pasteur, provisional designation 1989 XC1, is a carbonaceous background asteroid from the central regions of the asteroid belt, approximately 20 kilometers in diameter. It was discovered on 2 December 1989, by Belgian astronomer Eric Elst at the ESO's La Silla Observatory in Chile. The asteroid was named after French chemist and microbiologist Louis Pasteur. 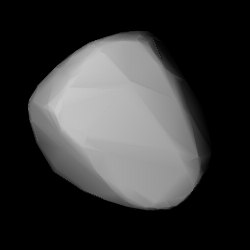 1189 Terentia, provisional designation 1930 SG, is a carbonaceous Terentian asteroid from the outer regions of the asteroid belt, approximately 56 kilometers in diameter and the namesake of its family. The asteroid was discovered by Russian astronomer Grigory Neujmin at Simeiz Observatory on 17 September 1930.

354P/LINEAR is a small Solar System body that displayed characteristics of both an asteroid and a comet, and thus, was initially given a cometary designation. Because it has the orbit of a main-belt asteroid and showed the tail of a comet, it was listed as a main-belt comet. But within a month of discovery, an analysis of images by the Hubble telescope suggested that its tail was generated by dust and gravel resulting from a recent head-on collision between asteroids rather than from sublimation of cometary ice. This was the first time a small-body collision had been observed; since then, minor planet 596 Scheila has also been seen to undergo a collision, in late 2010. The position of the nucleus was remarkable for being offset from the axis of the tail and outside the dust halo, a situation never before seen in a comet. The tail is created by millimeter-sized particles being pushed back by solar radiation pressure.

238P/Read is a main-belt comet discovered on 24 October 2005 by astronomer Michael T. Read using the Spacewatch 36-inch telescope on Kitt Peak National Observatory. It has an orbit within the asteroid belt and has displayed the coma of a traditional comet. It fits the definition of an Encke-type comet with.

The five-planet Nice model is a recent variation of the Nice model that begins with five giant planets, the four plus an additional ice giant in a chain of mean-motion resonances. 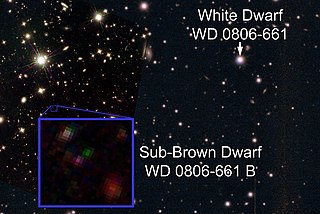 WD 0806−661 is a DQ white dwarf with an extremely cold Y-type substellar companion, located in the constellation Volans at 63 light-years from Earth. The companion was discovered in 2011, and is the only known Y-type companion to a star or stellar remnant. At the time of its discovery WD 0806-661 B had the largest actual and apparent separation of any known planetary-mass object, as well as being the coldest directly imaged substellar object then known.

311P/PanSTARRS also known as P/2013 P5 (PanSTARRS) is an asteroid discovered by Bryce T. Bolin using the Pan-STARRS telescope on 27 August 2013. Observations made by the Hubble Space Telescope revealed that it had six comet-like tails. The tails are suspected to be streams of material ejected by the asteroid as a result of a rubble pile asteroid spinning fast enough to remove material from it. This is similar to 331P/Gibbs, which was found to be a quickly-spinning rubble pile as well.