Robert H. McNaught (born in Scotland in 1956) is a Scottish-Australian astronomer at the Research School of Astronomy and Astrophysics of the Australian National University (ANU). He has collaborated with David J. Asher of the Armagh Observatory.

The inner main-belt asteroid 3173 McNaught, discovered by Edward Bowell at Anderson Mesa Station in 1981, was named after him by its discoverer, following a suggestion by David Seargent. [2]

McNaught is a prolific discoverer of asteroids and comets, described as "the world's greatest comet discoverer" [3] and he participated in the Siding Spring Survey (SSS) using the ANU's Uppsala Southern Schmidt Telescope. [4] He discovered the Great Comet C/2006 P1 on 7 August 2006, the brightest comet in several decades, which became easily visible to the naked eye for observers in the Southern Hemisphere. [5] The SSS was the only active professional Near Earth Object survey in the Southern Hemisphere. The survey ended in 2013 after funding dried up. [6]

McNaught previously worked on the Anglo-Australian Near-Earth Asteroid Survey from 1990–1996. [7]

McNaught worked at the University of Aston's satellite-tracking camera originally outside Evesham in 1982, thereafter at Herstmonceux and more recently at Siding Spring. In his spare time he successfully conducts patrols for novae, identifies images of prenovae and unusual variable stars on survey plates, measures their positions, makes astrometric observations of comets and minor planets and photometric observations of comets and novae. He also carries out extensive observational and computational work on meteors, as well as on occultations by minor planets.

In October 2011, partly due to changes in the exchange rate between the Australian and US dollars, Catalina Sky Survey of NASA had to end funding McNaught's southern survey, [8] which used to cost $110,000 per year, [9] ending the international cooperation in July 2012. The astronomer estimated that the survey needs $180,000 annually, plus a small one-time sum to fix the observatory dome. [8] For several months the project was temporarily funded from the ANU, but in late 2012, the ANU advised that it could no longer support the program and that funds would not be available from January 2013. [10] [ failed verification ]

In total, McNaught has discovered 82 comets.

McNaught is the co-discoverer of the following comets:

An asteroid is a minor planet of the inner Solar System. Historically, these terms have been applied to any astronomical object orbiting the Sun that did not resolve into a disc in a telescope and was not observed to have characteristics of an active comet such as a tail. As minor planets in the outer Solar System were discovered that were found to have volatile-rich surfaces similar to comets, these came to be distinguished from the objects found in the main asteroid belt. Thus the term "asteroid" now generally refers to the minor planets of the inner Solar System, including those co-orbital with Jupiter. Larger asteroids are often called planetoids. 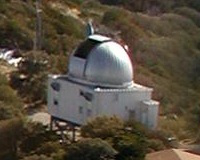 The Spacewatch project is an astronomical survey that specializes in the study of minor planets, including various types of asteroids and comets at Kitt Peak National Observatory near Tucson, Arizona, in the United States. 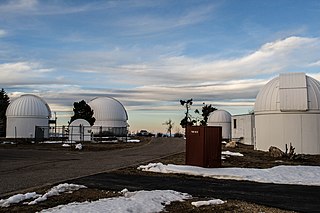 Catalina Sky Survey is an astronomical survey to discover comets and asteroids. It is conducted at the Steward Observatory's Catalina Station, located near Tucson, Arizona, in the United States.

Phocaea is a stony asteroid from the inner regions of the asteroid belt, approximately 75 kilometers in diameter. It is the parent body of the Phocaea family. Discovered by Jean Chacornac in 1853, it was named after the ancient Greek city of Phocaea.

Andrea Boattini is an Italian astronomer and a prolific discoverer of minor planets and comets.

Francesco Manca is an Italian amateur astronomer and discoverer of minor planets at the Sormano Astronomical Observatory in northern Italy. 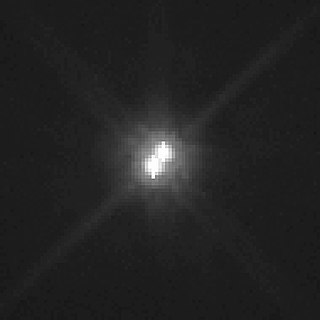 617 Patroclus is a large binary Jupiter trojan asteroid. It is a dark D-type asteroid and a slow rotator, due to the 103-hour orbital period of its two components. It is one of five Jovian asteroids targeted by the Lucy space probe, and is scheduled for a flyby in 2033.

The Siding Spring Survey (SSS) was a near-Earth object search program that used the 0.5-metre Uppsala Southern Schmidt Telescope at Siding Spring Observatory, New South Wales, Australia. It was the southern hemisphere counterpart of the Catalina Sky Survey (CSS) located in the Santa Catalina Mountains on Mount Bigelow, near Tucson, Arizona, USA. The survey was the only professional search for dangerous asteroids being made in the Southern Hemisphere.

Wide-field Infrared Survey Explorer is a NASA infrared astronomy space telescope in Explorer program. It was launched in December 2009, and placed in hibernation mode in February 2011, before being re-activated in 2013 and renamed the Near-Earth Object Wide-field Infrared Survey Explorer (NEOWISE). WISE discovered thousands of minor planets and numerous star clusters. Its observations also supported the discovery of the first Y Dwarf and Earth trojan asteroid.

Comet C/2006 M4 (SWAN) is a non-periodic comet discovered in late June 2006 by Robert D. Matson of Irvine, California and Michael Mattiazzo of Adelaide, South Australia in publicly available images of the Solar and Heliospheric Observatory (SOHO). These images were captured by the Solar Wind ANisotropies (SWAN) Lyman-alpha all-sky camera on board the SOHO. The comet was officially announced after a ground-based confirmation by Robert McNaught on July 12.

Comet McNaught can refer to any one of more than 50 comets discovered by the astronomer Robert H. McNaught.

The Uppsala Schmidt Telescope was moved to Siding Spring Observatory from Mount Stromlo Observatory in 1982. The instrument has been used to study the galaxy, asteroids and comets. It was last dedicated to the Siding Spring Survey. The telescope had a field of view of just over 6° through the use of a correcting plate, making its field three times as large as that of the Anglo-Australian Telescope. It used a spherical rather than a parabolic mirror with 0.6 m correcting plate to achieve this. Photographic plates and film were used as detectors.

Cadi Ayyad University is a university in Marrakesh and one of the largest universities in Morocco. One of its associated colleges, the École nationale des sciences appliquées de Marrakech, was created in 2000 by the Ministry of Higher Education and specializes in engineering and scientific research. Cadi Ayyad University was established in 1978 and operates 13 institutions in the Marrakesh-Safi region of Morocco in four main cities, including Kalaa of Sraghna, Essaouira and Safi in addition to Marrakesh.

In observational astronomy, the observation arc of a Solar System body is the time period between its earliest and latest observations, used for tracing the body's path. It is usually given in days or years. The term is mostly used in the discovery and tracking of asteroids and comets. Arc length has the greatest influence on the accuracy of an orbit. The number and spacing of intermediate observations has a lesser effect.

Eric J. Christensen is an American astronomer and a discoverer of comets. He works as a staff scientist with Catalina Sky Survey and is responsible for the survey's near-Earth object operation.