Abhisheka (Sanskrit : अभिषेक, romanized: Abhiṣeka) means "bathing of the divinity to whom worship is offered." [1] It is a religious rite or method of prayer in which a devotee pours a liquid offering on an image or murti of a God or Goddess. Abhisheka is common to Indian religions such as Hinduism, Buddhism and Jainism.

An abhiṣeka is conducted by priests by bathing the image of the deity being worshipped, amidst the chanting of mantras. Usually, offerings such as milk, yogurt, ghee, honey, panchamrita, sesame oil, rose water, sandalwood paste may be poured among other offerings depending on the type of abhishekam being performed. This rite is routinely performed in Hindu temples. A Rudrābhiṣeka or abhiṣeka of Rudra is performed on lingams. A Kumbhabhishekam is a consecration ritual for a Hindu temple. [2]

In Vajrayana Buddhism, an abhiṣeka can be a method for performing pointing-out instructions, a way to offer blessings of a lineage to participants, or it can be an empowerment to begin a particular meditation practice. [5]

This empowerment ritual is present in Tibetan Buddhism as well as in Chinese Esoteric Buddhism and in Shingon Buddhism.

The abhiṣeka was originally used as a consecration rite. Water from the four oceans was poured out of golden jars onto the head of royalty. It was used during a monarch's accession ceremony and also his investiture ceremony. [6]

The abhiseka rite (wangkur) is a prelude for initiation into mystical teaching. There are four classes of abhiseka, each being associated with one of the four Tantras. They are master consecration, secret consecration, knowledge of prajna, and the fourth consecration. [6]

The abhiṣeka ritual (灌頂, kanjō) in Shingon Buddhism is the initiation rite used to confirm that a student of esoteric Buddhism has now graduated to a higher level of practice. The kanji used literally mean "pouring from the peak", which poetically describes the process of passing on the master's teachings to the student. The rite was popular in China during the Tang dynasty, [7] and Kūkai, founder of Shingon, studied there extensively before introducing this rite to the Japanese Buddhist establishment of the time. [8] A separate initiation rite exists for the general public called the kechien kanjō (結縁灌頂), and symbolizes their initiation into esoteric Buddhism. This rite is generally only offered at Mount Kōya in Wakayama Prefecture in Japan, but it can be offered under qualified masters and under proper auspices outside Japan, albeit very rarely.[ citation needed ]

The Shingon rite utilizes one of the two Mandala of the Two Realms, depending on the occasion. In esoteric ritual, after the student receives the samaya precepts, the teacher of the esoteric Buddhism assumes the role of the teacher, usually Mahavairocana Buddha, while the master and student repeat specific mantras in a form of dialogue taken from esoteric Buddhist sutras. The student, who is blindfolded, then throws a flower upon the Mandala that is constructed, and where it lands (i.e. which deity) helps dictate where the student should focus his devotion on the esoteric path. [9] From there, the student's blindfold is removed and a vajra is placed in hand.

Abhisheka in Jainism means the ritual of consecration of the image of Jina. [10] 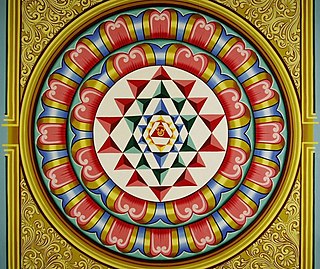 Tantra denotes the esoteric traditions of Hinduism and Buddhism that developed in India from the middle of the 1st millennium CE onwards. The term tantra, in the Indian traditions, also means any systematic broadly applicable "text, theory, system, method, instrument, technique or practice". A key feature of these traditions is the use of mantras, and thus they are commonly referred to as Mantramārga in Hinduism or Mantrayāna and Guhyamantra in Buddhism. 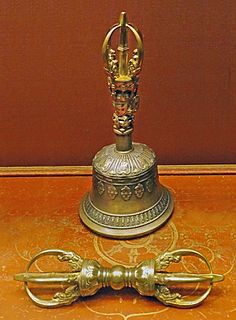 Vajrayāna along with Mantrayāna, Guhyamantrayāna, Tantrayāna, Tantric Buddhism and Esoteric Buddhism are names referring to Buddhist traditions associated with Tantra and "Secret Mantra", which developed in the medieval Indian subcontinent and spread to Tibet, East Asia, Mongolia and other Himalayan states.

A mandala is a geometric configuration of symbols. In various spiritual traditions, mandalas may be employed for focusing attention of practitioners and adepts, as a spiritual guidance tool, for establishing a sacred space and as an aid to meditation and trance induction. In the Eastern religions of Hinduism, Buddhism, Jainism and Shintoism it is used as a map representing deities, or especially in the case of Shintoism, paradises, kami or actual shrines. A mandala generally represents the spiritual journey, starting from outside to the inner core, through layers. 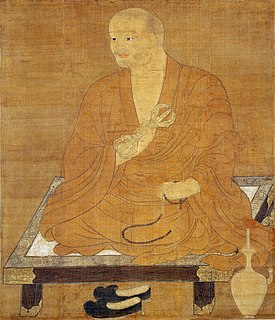 Kūkai, also known posthumously as Kōbō Daishi, was a Japanese Buddhist monk, calligrapher, and poet who founded the esoteric Shingon school of Buddhism. He travelled to China, where he studied Tangmi under the monk Huiguo. Upon returning to Japan, he founded Shingon—the Japanese branch of Vajrayana Buddhism. With the blessing of several Emperors, Kūkai was able to preach Shingon teachings and found Shingon temples. Like other influential monks, Kūkai oversaw public works and constructions. Mount Kōya was chosen by him as a holy site, and he spent his later years there until his death in 835 C.E. 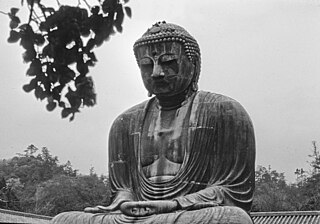 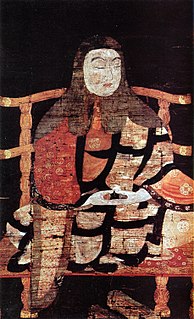 Saichō was a Japanese Buddhist monk credited with founding the Tendai school of Buddhism based on the Chinese Tiantai school he was exposed to during his trip to Tang China beginning in 804. He founded the temple and headquarters of Tendai at Enryaku-ji on Mount Hiei near Kyoto. He is also said to have been the first to bring tea to Japan. After his death, he was awarded the posthumous title of Dengyō Daishi (伝教大師). 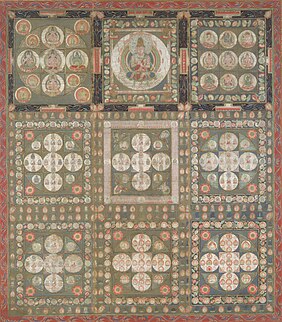 In Vajrayana Buddhism, the Diamond Realm is a metaphysical space inhabited by the Five Tathagatas. The Diamond Realm Mandala is based on an esoteric Buddhist sutra called the Vajrasekhara Sutra. 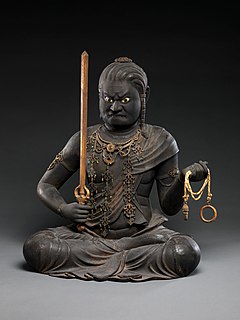 Acala or Achala, also known as Acalanātha or Āryācalanātha, is a wrathful deity and dharmapala prominent in Vajrayana Buddhism and East Asian Buddhism. 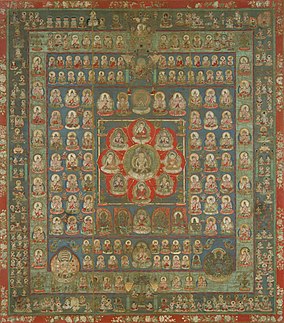 In Vajrayana Buddhism, the Womb Realm is the metaphysical space inhabited by the Five Compassion Buddhas. The Womb Realm is based on the Mahavairocana Tantra. The name of the mandala derives from chapter 2 of the sutra, where it is said that the buddha Mahāvairocana revealed the mandala's secret teachings to his disciple Vajrasattva from his "womb of compassion". In other translations, the term Matrix Realm or Matrix Mandala are used.

Prāṇa pratiṣṭhā refers to the rite or ceremony by which a murti is consecrated in a Hindu temple, wherein hymns and mantra are recited to invite the deity to be resident guest, and the murti's eye is opened for the first time. Practiced in the temples of Hinduism and Jainism, the ritual is considered to infuse life into the Hindu temple, and bring to it the numinous presence of divinity and spirituality.

The Buddhist Tantras are a varied group of Indian and Tibetan texts which outline unique views and practices of the Buddhist tantra religious systems. 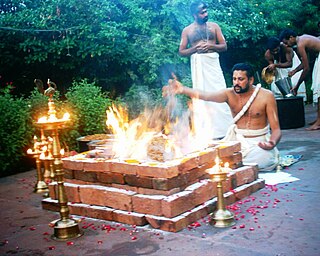 In the Vedic Hinduism, a homa also known as havan, is a fire ritual performed on special occasions by a Hindu priest usually for a homeowner. The grihasth keeps different kinds of fire including one to cook food, heat his home, amongst other uses; therefore, a Yagya offering is made directly into the fire. A homa is sometimes called a "sacrifice ritual" because the fire destroys the offering, but a homa is more accurately a "votive ritual". The fire is the agent, and the offerings include those that are material and symbolic such as grains, ghee, milk, incense and seeds.

Vajrasattva is a bodhisattva in the Mahayana, Mantrayana/Vajrayana Buddhist traditions. In the Japanese Vajrayana school of Buddhism, Shingon, Vajrasatva is the esoteric aspect of the bodhisattva Samantabhadra and is commonly associated with the student practitioner who through the master's teachings, attains an ever-enriching subtle and rarefied grounding in their esoteric practice. In Tibetan Buddhism Vajrasatva is associated with the sambhogakāya and purification practice.

In Vajrayāna Buddhism, esoteric transmission is the transmission of certain teachings directly from teacher to student during an empowerment (abhiṣeka) in a ritual space containing the mandala of the deity. Many techniques are also commonly said to be secret, but some Vajrayana teachers have responded that secrecy itself is not important and only a side-effect of the reality that the techniques have no validity outside the teacher-student lineage.

The samaya, is a set of vows or precepts given to initiates of an esoteric Vajrayana Buddhist order as part of the abhiṣeka ceremony that creates a bond between the guru and disciple.

The Vajraśekhara Sūtra is an important Buddhist tantra used in the Vajrayāna schools of Buddhism, but can refer to a number of different works. In particular a cycle of 18 texts studied by Amoghavajra, which included both Tattvasaṃgraha Tantra, and the Guhyasamaja Tantra, a Tibetan text which appears to be composed of two works grouped together and to further confuse matters in the Japanese Shingon school the Sarvatathāgatatattvasaṃgraha Tantra is known by this name. In Tibetan it is considered to be the main representative of the Yogatantra class of texts.

Huiguo (746–805) was a Buddhist monk of Tang China who studied the Vajrayana tradition recently imported from India. Later Huiguo would become the teacher of Kūkai, founder of Shingon Buddhism, a prominent school of Buddhism in Japan.

Chinese Esoteric Buddhism refers to traditions of Tantra and Esoteric Buddhism that have flourished among the Chinese people. The Tantric masters Śubhakarasiṃha, Vajrabodhi and Amoghavajra, established the Esoteric Buddhist Zhenyan tradition from 716 to 720 during the reign of Emperor Xuanzong of Tang. It employed mandalas, mantras, mudras, abhiṣekas, and deity yoga. The Zhenyan tradition was transported to Japan as Shingon Buddhism by Kūkai as well as influencing Korean Buddhism. The Song dynasty (960–1279) saw a second diffusion of Esoteric texts. Esoteric Buddhist practices continued to have an influence into the late imperial period and Tibetan Buddhism was also influential during the Yuan dynasty period and beyond. In the Ming dynasty (1368–1644) through to the modern period, esoteric practices and teachings became absorbed and merged with the other Chinese Buddhist traditions to a large extent.