The Act of Uniformity 1662 (14 Car 2 c 4) is an Act of the Parliament of England. (It was formerly cited as 13 & 14 Ch.2 c. 4, by reference to the regnal year when it was passed on 19 May 1662.) It prescribed the form of public prayers, administration of sacraments, and other rites of the Established Church of England, according to the rites and ceremonies prescribed in the Book of Common Prayer. Adherence to this was required in order to hold any office in government or the church, although the 1662 edition of the Book of Common Prayer prescribed by the Act was so new that most people had never even seen a copy. The Act also required that the Book of Common Prayer 'be truly and exactly Translated into the British or Welsh Tongue'. It also explicitly required episcopal ordination for all ministers, i.e. deacons, priests and bishops, which had to be reintroduced since the Puritans had abolished many features of the Church during the Civil War.

A few sections of this Act were still in force in the United Kingdom at the end of 2010. [3]

As an immediate result of this Act, over 2,000 clergymen refused to take the oath and were expelled from the Church of England in what became known as the Great Ejection of 1662. Although there had already been ministers outside the established church, this created the concept of non-conformity, with a substantial section of English society excluded from public affairs for a century and a half.

The Act of Uniformity itself is one of four crucial pieces of legislation, known as the Clarendon Code, named after Edward Hyde, Earl of Clarendon, Charles II's Lord Chancellor. They are:

Combined with the Test Act, the Corporation Acts excluded all nonconformists from holding civil or military office, and prevented them from being awarded degrees by the universities of Cambridge and Oxford.

Another Act, the Quaker Act (1662), required subjects to swear an oath of allegiance to the king, which Quakers did not do out of religious conviction.

The Book of Common Prayer introduced by Charles II was substantially the same as Elizabeth's version of 1559, itself based on Cranmer's earlier versions of 1549 and 1552. Apart from minor changes this remains the official and permanent legal version of prayer authorised by Parliament and Church.

The Toleration Act 1688 allowed certain dissenters places and freedom to worship, provided they accept to subscribe to an oath.

The Conventicle Act 1664 was an Act of the Parliament of England that forbade conventicles, defined as religious assemblies of more than five people other than an immediate family, outside the auspices of the Church of England.

The Five Mile Act, or Oxford Act, or Nonconformists Act 1665, was an Act of the Parliament of England, passed in 1665 with the long title "An Act for restraining Non-Conformists from inhabiting in Corporations". It was one of the English penal laws that sought to enforce conformity to the established Church of England, and to expel any who did not conform. It forbade clergymen from living within five miles of a parish from which they had been expelled, unless they swore an oath never to resist the king, or attempt to alter the government of Church or State. The latter involved swearing to obey the 1662 prayer book. Thousands of ministers were deprived of a living under this act.

In English history, penal law refers to a specific series of laws that sought to uphold the establishment of the Church of England against Protestant nonconformists and Catholicism by imposing various forfeitures, civil penalties, and civil disabilities upon these dissenters. The penal laws in general were repealed in the 19th century during the process of Catholic Emancipation. Penal actions are civil in nature and were not English common law.

Over the course of English parliamentary history there were a number of Acts of Uniformity. All had the basic object of establishing some sort of religious orthodoxy within the Church of England.

The Act of Uniformity 1558 was an Act of the Parliament of England passed in 1559. It set the order of prayer to be used in the English Book of Common Prayer. All persons had to go to church once a week or be fined 12 pence, a considerable sum for the poor.

Rev. John Westley (1636–78) was an English nonconformist minister. He was the grandfather of John Wesley.

Events from the year 1662 in England. 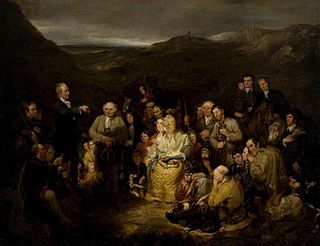 A conventicle originally signified no more than an assembly, and was frequently used by ancient writers for a church. At a semantic level conventicle is only a good Latinized synonym of the Greek word church, and points to Jesus' promise in Matthew 18:20, "Where two or three are met together in my name." It came to be applied specifically to meetings of religious associations, particularly private and secret gatherings for worship. Later it became a term of depreciation or reproach, implying that those of whom it was used were in opposition to the ruling ecclesiastical authorities; for example, it was applied to a cabal of mutinous monks in a convent or monastery. Ultimately it came to mean religious meetings of dissenters from an Established Church, held in places that were not recognized as specially intended for public worship or for the exercise of religious functions. It implied that a condition of affairs obtained in which the State made a distinction between a form or forms of religion whose practice and propagation were authorized by statute, and such as were expressly prohibited by enactment. This usage has received legal sanction in Britain.

Thomas Jollie (1629–1703) was an English Dissenter, a minister ejected from the Church of England for his beliefs.

The Toleration Act 1688, also referred to as the Act of Toleration, was an Act of the Parliament of England, which received the royal assent on 24 May 1689.

John Jackson (c.1621–1693) was an English nonconformist minister. Intruded as a fellow during the Parliamentary visitation of the University of Cambridge, he was expelled in 1650 as a result of the engagement controversy, and was an ejected minister of 1662.