This article lists the administrative divisions of the Chechnya , Russia.

Cheberloyevsky and Galanchozhsky Districts were re-introduced into the Constitution of the Chechen Republic in November 2012 (after having been removed in December 2007); however, as of 2020, their borders and composition have not been officially defined.

Urus-Martan is a town and the administrative center of Urus-Martanovsky District of the Chechen Republic, Russia, located on the Martan River. In 2010, its population was 49,070 (2010 Census);

Urus-Martanovsky District is an administrative and municipal district (raion), one of the fifteen in the Chechen Republic, Russia. It is located in the center of the republic. The area of the district is 650 square kilometers (250 sq mi). Its administrative center is the town of Urus-Martan. Population: 120,585 (2010 Census); 61,181 ; 85,087 (1989 Census). The population of Urus-Martan accounts for 40.7% of the district's total population.

Achkhoy-Martan is a rural locality in, and the administrative center of Achkhoy-Martanovsky District, Chechnya.

The William Howard School is a co-educational secondary academy school on Longtown Road (A6071) in Brampton, Cumbria, England for pupils aged 11–18.

The Uru, or "Fat Boat", is a generic name for large Dhow-type wooden ships made by asharis in Beypore, a village south of Kozhikode, Kerala, in the southwestern coast of India.

Gaidar Malikovich Gadzhiyev was a Russian major general of the Strategic Missile Troops.

Aiza Gazuyeva was a Chechen woman, known for committing a suicide attack that killed General Gaidar Gadzhiyev, a major general of the Russian Army, on November 29, 2001. Despite being personally motivated and not political, it was one of the first notable shahidka attacks to occur in Russia, and Gazuyeva became a semi-legendary figure among anti-Russian sentiment in Chechen society.

Michurina is the name of several rural localities in Russia:

The Terloy is a Chechen teip. The exact population of the teip is not known, however it is estimated to be around 30,000 people. Terloy speak in the Itum-Kali dialect of the Chechen language.

The Lamborghini Urus is an SUV manufactured by Italian automobile manufacturer Lamborghini. It was unveiled on 4 December 2017 and was put on the market for the 2018 model year. The name comes from the urus, the ancestor of modern domestic cattle, also known as the aurochs.

Galanchozhsky District, is a district (raion) of Chechnya. The district was recreated in 2012. However, the official restoration process of the district is not complete. The district also existed between 1925 and 1944. The administrative center is the village of Aka-Bass. 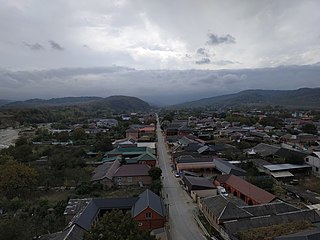 Shalazhi is a rural locality in the Urus-Martanovsky District, the Chechen Republic, Russia.