Developed during the 2014 Google Summer of Code with support from the Tor Project, the open source [1] search engine was initially built in Django and PostgreSQL. It collects the peculiar anonymous identifier called .onion URLs from the Tor network and feeds these to its index except those containing a robots.txt file. [2] The search engine filters out child pornography [3] and keeps a blacklist of abusive services. [4]

The service partners with GlobaLeaks's submissions and Tor2web statistics for hidden service discovery [5] and as of July 2015 has indexed about 5000 sites. [6] Ahmia is also affiliated with Hermes Center for Transparency and Digital Rights, an organization that promotes transparency and freedom-enabling technologies. [7]

In July 2015 the site published a list of hundreds of fraudulent fake versions of web pages (including such sites as DuckDuckGo, as well a dark web page). [8] [9] According to Nurmi, "someone runs a fake site on a similar address to the original one and tries to fool people with that" with the intent of scamming people (e.g. gathering bitcoin money by spoofing bitcoin addresses). [10]

A dark net or darknet is an overlay network within the Internet that can only be accessed with specific software, configurations, or authorization, and often uses a unique customised communication protocol. Two typical darknet types are social networks, and anonymity proxy networks such as Tor via an anonymized series of connections.

Tor is free and open-source software for enabling anonymous communication. The name derived from the acronym for the original software project name "The Onion Router". Tor directs Internet traffic through a free, worldwide, volunteer overlay network consisting of more than seven thousand relays to conceal a user's location and usage from anyone conducting network surveillance or traffic analysis. Using Tor makes it more difficult to trace Internet activity to the user: this includes "visits to Web sites, online posts, instant messages, and other communication forms". Tor's intended use is to protect the personal privacy of its users, as well as their freedom and ability to conduct confidential communication by keeping their Internet activities unmonitored.

DuckDuckGo is an internet search engine that emphasizes protecting searchers' privacy and avoiding the filter bubble of personalized search results. DuckDuckGo distinguishes itself from other search engines by not profiling its users and by showing all users the same search results for a given search term.

The dark web is the World Wide Web content that exists on darknets, overlay networks that use the Internet but require specific software, configurations, or authorization to access. Through the dark web, private straphanger networks can communicate and conduct business anonymously without divulging identifying information, such as a user's location. The dark web forms a small part of the deep web, the part of the Web not indexed by web search engines, although sometimes the term deep web is mistakenly used to refer specifically to the dark web. 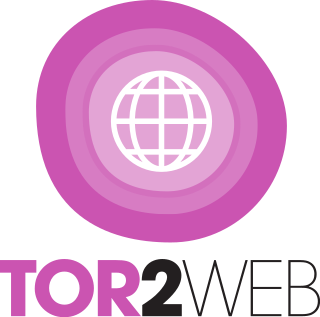 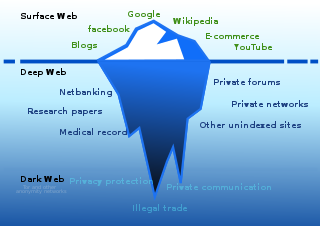 Clearnet is a term typically referring to the publicly accessible Internet, the opposite of the term darknet which typically describes the services built on Tor or other anonymity networks, the connection to which is encrypted and anonymized.