TorChat was a centralized client-server [1] quasi-anonymous instant messenger based on Instantbird, [1] that used Tor onion services as its underlying network. It provides cryptographically secure text messaging and file transfers. [2] The characteristics of Tor's onion services ensure that all traffic between the clients is encrypted and that it is very difficult to tell who is communicating with whom and where a given client is physically located, but suffers from metadata leaks. [1]

In TorChat every user has a unique alphanumeric ID consisting of 16 characters. This ID will be randomly created by Tor when the client is started the first time, it is basically the .onion address of an onion service. TorChat clients communicate with each other by using Tor to contact the other's onion service (derived from their ID) and exchanging status information, chat messages and other data over this connection. Since onion services can receive incoming connections even if they are behind a router doing network address translation (NAT), TorChat does not need any port forwarding to work.

The first public version of TorChat was released in November 2007 [3] [4] by Bernd Kreuss (prof7bit). [5] [2] [6] It is written in Python and used the cross-platform widget toolkit wxPython which made it possible to support a wide range of platforms and operating systems.

The older Windows versions of TorChat were built with py2exe (since 0.9.9.292 replaced with pyinstaller) and came bundled with a copy of Tor readily configured so that it could be run as a portable application right off a USB flash drive without any installation, configuration or account creation.

Between 2008 and 2010 weren't any updated packages, resulting in the bundled version of Tor becoming obsolete and unable to connect to the Tor network, [7] which was the reason for the appearance of forks that basically just replaced the bundled Tor.exe with a current one.[ citation needed ] In December 2010, an official update finally became available that, among some minor bugfixes, also again included an up-to-date Tor.exe.[ citation needed ]

Six years after last release, TorChat was officially discontinued in 2018. [8]

A fork was released for OS X in the summer of 2010 by a French developer. The binary (a Cocoa application) and source-code (Objective-C) bundled in a Xcode 7 project can be downloaded on SourceMac.

A rewrite of the TorChat protocol in Java was created in the beginning of 2012, called jTorChat on Google Code. Containing the latest Tor.exe, it is meant to emulate all the features of the original TorChat protocol, as well as extending the protocols for jTorChat-specific features. Filesharing, while implemented in the original TorChat, is not yet implemented in jTorChat. A new capability in jTorChat is the broadcast mode, which allows a user to send messages to everybody in the network, even if they are not in their buddylist. Also buddy request mode is implemented, which allows a user to request a random user in the jTorChat network to add them. At this stage jTorChat is designed to work effectively on Windows without any configuration, however since its written in Java, it can run on any platform supported by both, Tor and Java itself, making it very portable. The project is actively seeking Java contributors, especially to help debug the GUI interface.

As of 5 February 2013, developer Prof7bit moved TorChat to GitHub, [9] as a protest against Google selectively censoring access to TorChat download to certain countries.[ citation needed ] Prof7bit has switched to working on torchat2, which is a rewrite from scratch, using Lazarus and Free Pascal.[ citation needed ]

In 2015 security analysis [10] of TorChat protocol and its Python implementation was conducted. It was found that although the design of TorChat is sound, its implementation has several flaws, which make TorChat users vulnerable to impersonation, communication confirmation and denial-of-service attacks. Despite the flaws found, the use of TorChat might still be secure in a scenario where the peer's onion address does not become known to an adversary interested in attacking the person behind the TorChat address.

Bonjour is Apple's implementation of zero-configuration networking (zeroconf), a group of technologies that includes service discovery, address assignment, and hostname resolution. Bonjour locates devices such as printers, other computers, and the services that those devices offer on a local network using multicast Domain Name System (mDNS) service records.

Datagram Transport Layer Security (DTLS) is a communications protocol that provides security for datagram-based applications by allowing them to communicate in a way that is designed to prevent eavesdropping, tampering, or message forgery. The DTLS protocol is based on the stream-oriented Transport Layer Security (TLS) protocol and is intended to provide similar security guarantees. The DTLS protocol datagram preserves the semantics of the underlying transport—the application does not suffer from the delays associated with stream protocols, but because it uses UDP, the application has to deal with packet reordering, loss of datagram and data larger than the size of a datagram network packet. Because DTLS uses UDP rather than TCP, it avoids the "TCP meltdown problem", when being used to create a VPN tunnel.

BitlBee is a cross-platform IRC instant messaging gateway, licensed under the terms of the GNU General Public License. 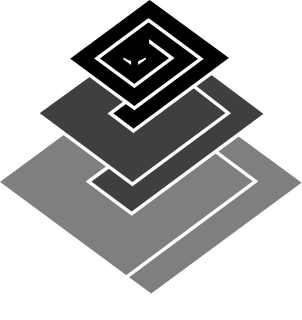 Twisted is an event-driven network programming framework written in Python and licensed under the MIT License.

This is a comparison of voice over IP (VoIP) software used to conduct telephone-like voice conversations across Internet Protocol (IP) based networks. For residential markets, voice over IP phone service is often cheaper than traditional public switched telephone network (PSTN) service and can remove geographic restrictions to telephone numbers, e.g., have a PSTN phone number in a New York area code ring in Tokyo. 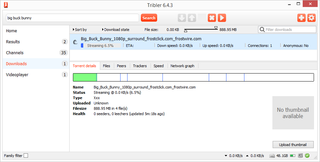 Tribler is an open source decentralized BitTorrent client which allows anonymous peer-to-peer by default. Tribler is based on the BitTorrent protocol and uses an overlay network for content searching. Due to this overlay network, Tribler does not require an external website or indexing service to discover content. The user interface of Tribler is very basic and focused on ease of use instead of diversity of features. Tribler is available for Linux, Windows, and OS X.

Jitsi is a collection of free and open-source multiplatform voice (VoIP), video conferencing and instant messaging applications for the web platform, Windows, Linux, macOS, iOS and Android. The Jitsi project began with the Jitsi Desktop. With the growth of WebRTC, the project team focus shifted to the Jitsi Videobridge for allowing web-based multi-party video calling. Later the team added Jitsi Meet, a full video conferencing application that includes web, Android, and iOS clients. Jitsi also operates meet.jit.si, a version of Jitsi Meet hosted by Jitsi for free community use. Other projects include: Jigasi, lib-jitsi-meet, Jidesha, and Jitsi. 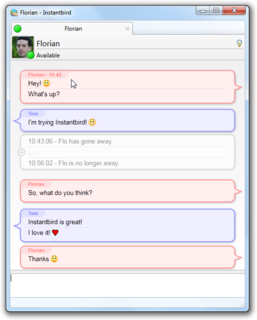 Tox is a peer-to-peer instant-messaging and video-calling protocol that offers end-to-end encryption. The stated goal of the project is to provide secure yet easily accessible communication for everyone. A reference implementation of the protocol is published as free and open-source software under the terms of the GNU General Public License (GPL) version 3 or later.

Gitter is an open-source instant messaging and chat room system for developers and users of GitLab and GitHub repositories. Gitter is provided as software-as-a-service, with a free option providing all basic features and the ability to create a single private chat room, and paid subscription options for individuals and organisations, which allows them to create arbitrary numbers of private chat rooms.

The Signal Protocol is a non-federated cryptographic protocol that can be used to provide end-to-end encryption for voice calls, video calls, and instant messaging conversations. The protocol was developed by Open Whisper Systems in 2013 and was first introduced in the open-source TextSecure app, which later became Signal. Several closed-source applications have implemented the protocol, such as WhatsApp, which is said to encrypt the conversations of "more than a billion people worldwide". Facebook Messenger also say they offer the protocol for optional Secret Conversations, as does Skype for its Private Conversations.