BTDigg is the first Mainline DHT search engine. [1] [2] [3] It participated in the BitTorrent DHT network, supporting the network and making correspondence between magnet links and a few torrent attributes (name, size, list of files) which are indexed and inserted into a database. For end users, BTDigg provides a full-text database search via Web interface. The web part of its search system retrieved proper information by a user's text query. The Web search supported queries in European and Asian languages. The project name was an acronym of BitTorrent Digger (in this context digger means a treasure-hunter). [4] It went offline in June 2016, reportedly due to index spam. [5] The site returned later in 2016 at a dot-com domain, went offline again and is now online.[ citation needed ]. The btdig.com site has its torrent crawler's source source listed on Github, dhtcrawler2.

BTDigg was created as a DHT search engine for free content for the BitTorrent network. The web part of the BTDigg search system provides magnet links and partial torrent information (name, list of files, size) from the database. The returned results are based on a user's text query. BTDigg's DHT search engine links two subjects that are partial information from a torrent and a magnet link, similar to the process of linking the content of a web page with a page URL. BTDigg also provides API for third-party applications. [1]

BTDigg was founded by Nina Evseenko in January 2011. The site is also available via the I2P network and Tor.

BTDigg provides decentralization of database creation and ability to show distributed ratings being provided by users via μTorrent. [6] There is also no guarantee about content because BTDigg does not analyze and does not store content. BTDigg is not a tracker because it does not share content, does not participate in or coordinate BitTorrent swarm. It is not a BitTorrent Index because it does not store and does not maintain a static list of torrents. It does allow the authorities to monitor and record your search terms and downloads[ original research? ].

A distributed hash table (DHT) is a distributed system that provides a lookup service similar to a hash table: key-value pairs are stored in a DHT, and any participating node can efficiently retrieve the value associated with a given key. The main advantage of a DHT is that nodes can be added or removed with minimum work around re-distributing keys. Keys are unique identifiers which map to particular values, which in turn can be anything from addresses, to documents, to arbitrary data. Responsibility for maintaining the mapping from keys to values is distributed among the nodes, in such a way that a change in the set of participants causes a minimal amount of disruption. This allows a DHT to scale to extremely large numbers of nodes and to handle continual node arrivals, departures, and failures.

BitTorrent is a communication protocol for peer-to-peer file sharing (P2P), which enables users to distribute data and electronic files over the Internet in a decentralized manner. 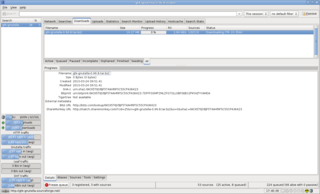 gtk-gnutella is a peer-to-peer file sharing application which runs on the gnutella network. gtk-gnutella uses the GTK+ toolkit for its graphical user interface. Released under the GNU General Public License, gtk-gnutella is free software.

BitComet is a cross-protocol BitTorrent, HTTP and FTP client written in C++ for Microsoft Windows and available in 52 different languages. Its first public release was version 0.28. The current BitComet logo has been used since version 0.50.

Magnet is a URI scheme that defines the format of magnet links, a de facto standard for identifying files (URN) by their content, via cryptographic hash value rather than by their location.

A BitTorrent tracker is a special type of server that assists in the communication between peers using the BitTorrent protocol.

KTorrent is a BitTorrent client that is part of the KDE Software Compilation. 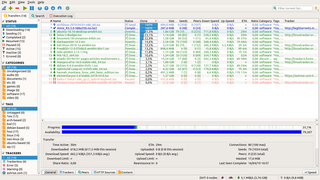 Rainberry, Inc., formerly known as BitTorrent, Inc., is an American company that is responsible for the ongoing development of the BitTorrent peer-to-peer protocol, as well as the ongoing development of μTorrent and BitTorrent Mainline, two clients for that protocol. Files transferred using the BitTorrent protocol constitute a significant slice of all Internet traffic. At its peak, 170 million people used the protocol every month, according to the company's website. The company was founded on September 22, 2004 by Bram Cohen and Ashwin Navin. In 2018, the company was acquired by cryptocurrency startup TRON, and Bram Cohen left the company.

The following is a general comparison of BitTorrent clients, which are computer programs designed for peer-to-peer file sharing using the BitTorrent protocol.

Mainline DHT is the name given to the Kademlia-based distributed hash table (DHT) used by BitTorrent clients to find peers via the BitTorrent protocol. The idea of using a DHT for distributed tracking was first implemented in Azureus 2.3.0.0 in May 2005, from which it gained significant popularity. Unrelated but similarly timed BitTorrent, Inc. released their own similar DHT into their client, called Mainline DHT and thus popularized the use of distributed tracking in the BitTorrent Protocol. Measurement shows by 2013 users of Mainline DHT is from 10 million to 25 million, with a daily churn of at least 10 million. 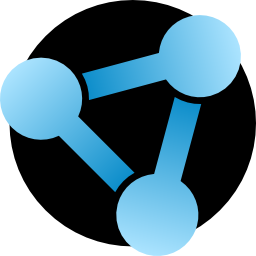 Retroshare is a free and open-source peer-to-peer communication and file sharing app based on a friend-to-friend network built on GNU Privacy Guard (GPG). Optionally, peers may communicate certificates and IP addresses to and from their friends.

μTorrent, or uTorrent is a proprietary adware BitTorrent client owned and developed by BitTorrent, Inc. With over 150 million users it is the most widely used BitTorrent client outside China; globally only behind Xunlei. The "μ" in its name comes from the SI prefix "micro-", referring to the program's small memory footprint: the program was designed to use minimal computer resources while offering functionality comparable to larger BitTorrent clients such as Vuze or BitComet. uTorrent was controversial for mining cryptocurrency when installed. They had removed the cryptocurrency miner in later versions but it had already done irreversible damage to uTorrent's reputation.

Nyaa Torrents is a BitTorrent website focused on East Asian media. It is one of the largest public anime-dedicated torrent indexes.

ZeroNet is a decentralized web-like network of peer-to-peer users, created by Tamas Kocsis in 2015. Programming for the network is based in Budapest, Hungary; is built in Python; and is fully open source. Instead of having an IP address, sites are identified by a public key. The private key allows the owner of a site to sign and publish changes, which propagate through the network. Sites can be accessed through an ordinary web browser when using the ZeroNet application, which acts as a local webhost for such pages. In addition to using bitcoin cryptography, ZeroNet uses trackers from the BitTorrent network to negotiate connections between peers. ZeroNet is not anonymous by default, but it supports routing traffic through the Tor network.

1337x is a website that provides a directory of torrent files and magnet links used for peer-to-peer file sharing through the BitTorrent protocol. According to the TorrentFreak news blog, 1337x is the third most popular torrent website as of 2021.