HackBB was a Tor hidden service Internet forum specializing in buying stolen credit cards, skimming ATMs, and hacking computers, servers and accounts. [1] The site was often a destination for hacked and stolen data dumps. [2] At some point the site was hosted by Tor hosting company Freedom Hosting. [3]

The site was founded by 'OptimusCrime' in the earlier days of Tor. In June 2012, user 'Boneless' was promoted to an administrator role, who went on to handle site escrow. However, in March 2013 Boneless's account was used to destroy the site's database, and again in May by some accounts he secretly created. [4] The site initially recovered from this, but shut down sometime afterwards due to the loss of faith in the site's administration and the raid on its host Freedom Hosting in August 2013. [5]

A dark net is an overlay network within the Internet that can only be accessed with specific software, configurations, or authorization, and often uses a unique customised communication protocol. Two typical darknet types are social networks, and anonymity proxy networks such as Tor via an anonymized series of connections. The term 'darknet' was popularised by major news outlets to associate with Tor Onion services, when the infamous drug bazaar Silk Road used it, despite the terminology being unofficial. Technology such as Tor, I2P, and Freenet was intended to defend digital rights by providing security, anonymity, or censorship resistance and is used by both criminals and legitimate users. Anonymous communication between whistle-blowers, activists, journalists and news organisations is also facilitated by darknets through use of applications such as SecureDrop.

Internet censorship in India is done by both central and state governments. DNS filtering and educating service users in suggested usages is an active strategy and government policy to regulate and block access to Internet content on a large scale. Also measures for removing content at the request of content creators through court orders have become more common in recent years. Initiating a mass surveillance government project like Golden Shield Project is also an alternative discussed over the years by government bodies. 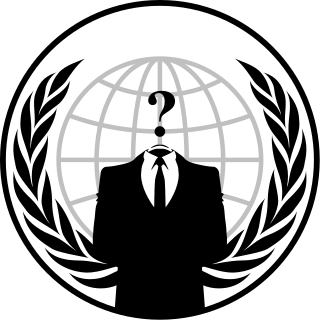 Anonymous is a decentralized international activist/hacktivist collective/movement that is widely known for its various cyber attacks against several governments, government institutions and government agencies, corporations, and the Church of Scientology.

Tor is free and open-source software for enabling anonymous communication. The name is derived from the acronym for the original software project name "The Onion Router". Tor directs Internet traffic through a free, worldwide, volunteer overlay network consisting of more than seven thousand relays to conceal a user's location and usage from anyone conducting network surveillance or traffic analysis. Using Tor makes it more difficult to trace Internet activity to the user: this includes "visits to Web sites, online posts, instant messages, and other communication forms". Tor's intended use is to protect the personal privacy of its users, as well as their freedom and ability to conduct confidential communication by keeping their Internet activities unmonitored.

Anonymous is a decentralized virtual community. They are commonly referred to as an internet-based collective of hacktivists whose goals, like its organization, are decentralized. Anonymous seeks mass awareness and revolution against what the organization perceives as corrupt entities, while attempting to maintain anonymity. Anonymous has had a hacktivist impact. This is a timeline of activities reported to be carried out by the group.

Hunter Moore is an American internet entrepreneur and convicted criminal from Sacramento, California. Rolling Stone called him "the most hated man on the Internet." His "revenge porn" website Is Anyone Up? allowed users to post sexual and explicit photos of people online without their consent, often accompanied by personal information such as their name and address. He refused to take down pictures on request. Moore called himself "a professional life ruiner" and compared himself to Charles Manson. The website was up for 16 months, during which Moore stated several times he was protected by the same laws that protect Facebook. Moore also paid a hacker to break into email accounts of victims and steal private photos to post. The FBI started an investigation on Moore in 2012 after receiving evidence from the mother of one of the victims. The site was closed in April 2012 and sold to an anti-bullying group. In February 2015, Moore pleaded guilty to felony charges for aggravated identity theft and aiding and abetting in the unauthorized access of a computer. In December 2015, Moore was sentenced to two years and six months in prison, a $2,000 fine, and $145.70 in restitution.

Freedom hosting is a defunct Tor specialist web hosting service that was established in 2008. At its height in August 2013, it was the largest Tor webhost.

A darknet market or cryptomarket is a commercial website on the web that operates via darknets such as Tor or I2P. They function primarily as black markets, selling or brokering transactions involving drugs, cyber-arms, weapons, counterfeit currency, stolen credit card details, forged documents, unlicensed pharmaceuticals, steroids, and other illicit goods as well as the sale of legal products. In December 2014, a study by Gareth Owen from the University of Portsmouth suggested the second most popular sites on Tor were darknet markets.

DeepDotWeb was a news site dedicated to events in and surrounding the dark web featuring interviews and reviews about darknet markets, Tor hidden services, legal actions, privacy, bitcoin and related news. The website was seized on May 7, 2019 during an investigation into the owners' affiliate marketing model, in which they received money for posting links to certain darknet markets.

Operation Torpedo was a 2011 operation in which the FBI compromised three different hidden services hosting child pornography, which would then target anyone who happened to access them using a network investigative technique (NIT).

Playpen was the world's most notorious darknet child pornography website after its creation in August 2014. When it was shut down in February 2015, the site had over 215,000 users and hosted 23,000 sexually explicit images and videos of children as young as toddlers.