Cat's Ash (Welsh : Cathonnen) is a small hamlet to the east of the city centre of the city of Newport, South East Wales. 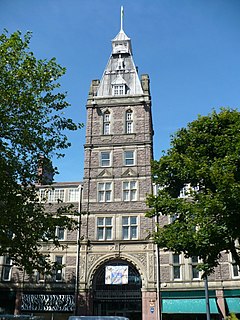 The placename in both English and Welsh refers to ash trees.

Rhondda Cynon Taf, or informally RCT, is a county borough in the south of Wales. It consists of five valleys: the Rhondda Fawr and Fach, Cynon, Taff and Ely valleys, plus a number of towns and villages away from the valleys. Results from the 2011 census showed 19.1% of its 234,410 residents self-identified themselves as having some ability in the use of the Welsh language.

Cynon Valley is a constituency of the House of Commons of the Parliament of the United Kingdom. It elects one Member of Parliament (MP) by the first past the post system of election. It is a Labour Party stronghold.

Riverside is an inner-city area and community of Cardiff, Wales, next to the River Taff. Riverside is also the name of the electoral ward, which includes the district of Pontcanna, to the north. 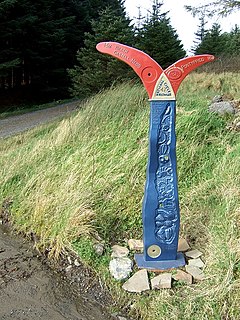 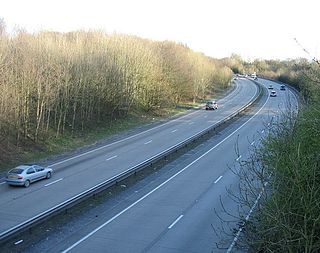 The River Onny is a river in Shropshire, England. It is a major tributary of the River Teme.

The Cardiff Centenary Walk is a tourist walkway through Cardiff city centre in Wales. Established as part of Cardiff's centennial celebrations to mark 100 years of city status in 2005, it has 41 points of interest, either Cardiff landmarks or significant historic sites. The route is marked by waymarkers on the pavement, which also direct pedestrians to the next waymarker. The whole walk is 3.6 kilometres (2.2 mi) long running around Cardiff in a clockwise direction, starting and finishing at the Cardiff Visitor Centre at the Old Library.

Llangua is a village in Monmouthshire, south-east Wales, United Kingdom. 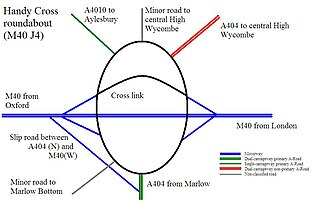 Handy Cross roundabout is a major road interchange at Handy Cross, High Wycombe, Buckinghamshire; the junction for High Wycombe, the M40 motorway and the A404 dual-carriageway. It is the terminus of the A4010 which runs to Aylesbury.

Godkowo is a village in Elbląg County, Warmian-Masurian Voivodeship, in northern Poland. It is the seat of the gmina called Gmina Godkowo. It lies approximately 34 kilometres (21 mi) east of Elbląg and 51 km (32 mi) north-west of the regional capital Olsztyn.

The Whittington Stone is an 1821 monumental stone and statue of a cat at the foot of Highgate Hill, a street, in Archway. 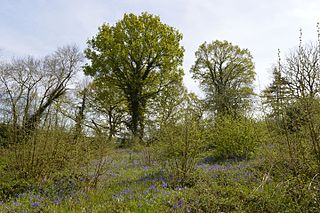 Welsh Wood is a 3.2 hectare Local Nature Reserve in Colchester in Essex. It is owned and managed by Colchester Borough Council.

Mountain Ash East is a community and coterminous electoral ward in Rhondda Cynon Taf, Wales. It primarily includes the part of the village of Mountain Ash east of the River Cynon. The community was formed in 2016 when the larger community of Mountain Ash was divided into East and West to match the ward boundaries.