The Colonial Prison Service Medal was established on 28 October 1955 as a long service medal of the United Kingdom and the Commonwealth. On 10 April 2012 the medal became known as the Overseas Territories Prison Service Medal, [3] and underwent a minor change in design. This reflected the change in the way Britain's remaining colonies were described, they having been classed as 'Overseas Territories' from 2002. [4]

The medal may be awarded for long service and good conduct to prison service staff of all ranks, who on or after 28 October 1955, have completed eighteen years of continuous qualifying service. Previous qualifying service in the Prison Service of other colonies or territories may be counted towards the required period. Service with the police may be counted if it is continuous with service with the prison services. [1]

A recipient who is convicted of a criminal offence or dismissed for misconduct would forfeit the medal. [1]

The medal is circular, silver, and 36 mm (1.4 in) in diameter. The obverse bears the crowned effigy of Elizabeth II surrounded by the royal titles. The reverse depicts a phoenix rising out of flames and flying upwards toward the sun. Around the edge at the top are the words, COLONIAL PRISON SERVICE and below are the words FOR LONG SERVICE & GOOD CONDUCT, [5] the top inscription changing to OVERSEAS TERRITORIES PRISON SERVICE in 2012. The name and details of the recipient are inscribed on the rim of the medal. [6]

The 32 mm (1.3 in) wide ribbon is worn from a ring suspender and is green with a narrow white stripe in the centre and wide edges of dark blue. [5] The clasp for further service is attached to the ribbon and is silver and decorated with a spray of laurel. 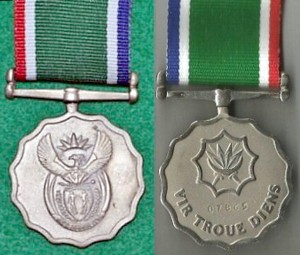 The Medalje vir Troue Diens - Medal for Loyal Service was instituted by the President of the Republic of South Africa on 16 April 2003 and came into effect on 27 April 2003. It can be awarded to all ranks whose character and conduct have been irreproachable and who have completed ten years of qualifying service. 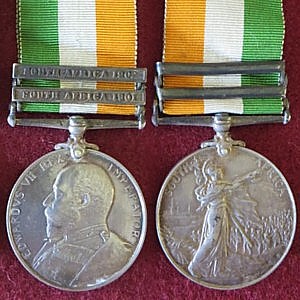 The King's South Africa Medal is a British campaign medal awarded to all British and Colonial military personnel who served in the Second Boer War in South Africa, and who were in the theatre on or after 1 January 1902 and who had completed 18 months service in the conflict prior to 1 June 1902. 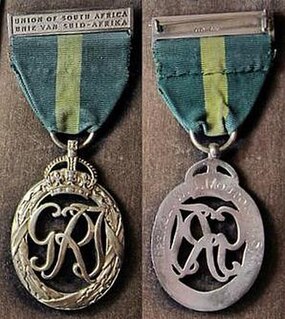 The Diamond Jubilee Medal was instituted in 1897 by Royal Warrant as a British decoration. The medal was awarded to members of the Royal Family and the court, guests and dignitaries present at the celebrations of Queen Victoria's diamond jubilee and to selected soldiers and sailors who formed the jubilee parade in London. 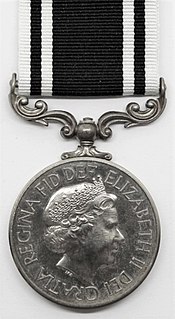 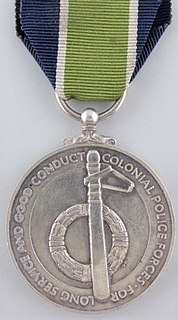 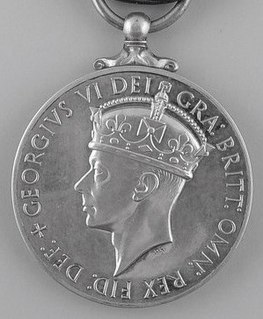 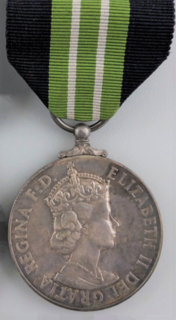 A number of Royal National Lifeboat Institution awards have been established by the Royal National Lifeboat Institution (RNLI) since its creation in 1824. None are approved by the Crown, and are therefore unofficial awards. As such, they do not appear in the official British order of wear, although the principal lifesaving award, the Medal of the RNLI, can be worn on the right breast in uniform by members of the British armed forces.