This Royal Ulster Constabulary Service Medal was awarded to all members of the RUC and RUC Reserve who completed eighteen months of service. Those individuals who died, were wounded, or disabled due to service, and did not complete the required period of service were also eligible for the medal. Service must have been from 1 January 1971, [2] until the replacement of the RUC in 2001. 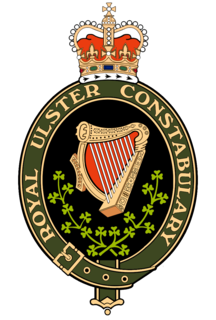 The George Cross (GC) is the highest award bestowed by the British government for non-operational gallantry or gallantry not in the presence of an enemy. In the UK honours system, the George Cross is equal in stature to the Victoria Cross, the highest military gallantry award. This has been the case since the introduction of the award in 1940. It is awarded "for acts of the greatest heroism or for most conspicuous courage in circumstance of extreme danger", not in the presence of the enemy, to members of the British armed forces and to British civilians. Posthumous awards have been allowed since it was instituted. It was previously awarded to residents of Commonwealth countries, most of which have since established their own honours systems and no longer recommend British honours. It may be awarded to a person of any military rank in any service and to civilians including police, emergency services and merchant seamen. Many of the awards have been personally presented by the British monarch to recipients or, in the case of posthumous awards, to next of kin. These investitures are usually held at Buckingham Palace. 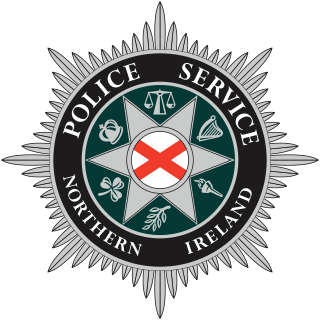 The Police Service of Northern Ireland is the police force that serves Northern Ireland. It is the successor to the Royal Ulster Constabulary (RUC) after it was reformed and renamed in 2001 on the recommendation of the Patten Report. 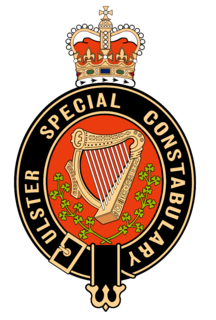 The Ulster Special Constabulary was a quasi-military reserve special constable police force in Northern Ireland. It was set up in October 1920, shortly before the partition of Ireland. It was an armed corps, organised partially on military lines and called out in times of emergency, such as war or insurgency. It performed this role most notably in the early 1920s during the Irish War of Independence and the 1956-1962 IRA Border Campaign.

The Ulster Defence Regiment (UDR) was an infantry regiment of the British Army established in 1970, with a comparatively short existence ending in 1992. Raised through public appeal, newspaper and television advertisements, their official role was the "defence of life or property in Northern Ireland against armed attack or sabotage" but unlike troops from Great Britain they were never used for "crowd control or riot duties in cities". It was the largest infantry regiment in the British Army, formed with seven battalions plus another four added within two years. 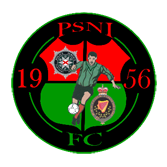 PSNI Football Club is a semi-professional, Northern Irish football club playing in the NIFL Premier Intermediate League. The club is associated with the Police Service of Northern Ireland, and its home ground is Newforge Lane in Belfast.

Sir Ronald Flanagan is a retired senior Northern Irish police officer. He was the Home Office Chief Inspector of Constabulary for the United Kingdom excluding Scotland. Sir Ronnie was previously the Chief Constable of the Police Service of Northern Ireland (PSNI) since its creation in 2001 to 2002, and had been Chief Constable of its predecessor, the Royal Ulster Constabulary (RUC) until 2001.

The Queen's Gallantry Medal (QGM) is a United Kingdom decoration awarded for exemplary acts of bravery by civilians, and by members of the Armed Forces "not in the face of the enemy", where the services were not so outstanding as to merit the George Cross or the George Medal, but above the level required for the Queen's Commendation for Bravery. 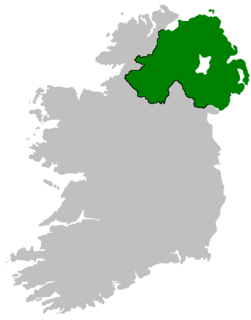 The Special Patrol Group (SPG) of the Royal Ulster Constabulary was a tactical reserve of 150 officers which had the role: to provide backup in civil commotion, to police sensitive areas at times of confrontation, and to show the flag in a disciplined and impressive way to those who wished to break the peace. Formerly known as the Police Reserve Force, the name was changed to Special Patrol Group in 1970 to avoid confusion between the Reserve Force and the newly formed RUC Reserve.

The Police Act 2000 is an Act of the Parliament of the United Kingdom. The act renamed the Royal Ulster Constabulary (RUC) to the Police Service of Northern Ireland (PSNI). It also created the Northern Ireland Policing Board and District Police Partnerships. The act was designed to gain cross-community support for law enforcement in Northern Ireland with several initiatives included in the act, including a change of oath of office and a 50:50 recruitment policy for Protestants and Roman Catholics.

On 7 December 1985 the Provisional Irish Republican Army (IRA) attacked the Royal Ulster Constabulary (RUC) base at Ballygawley, County Tyrone. Two RUC officers were shot dead and the base was raked with gunfire before being completely destroyed by a bomb, which wounded a further three officers.

The Headquarters Mobile Support Unit (HMSU) is the police tactical unit of the Police Service of Northern Ireland. The HMSU was originally formed in the then Royal Ulster Constabulary part of Special Branch and was involved in several controversial shootings during The Troubles.

Ross Hussey is a former unionist politician in Northern Ireland. He was MLA for West Tyrone from 2011 to 2017. 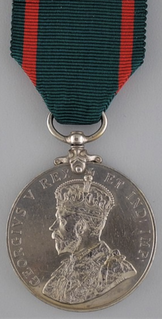 On 12 July 2001, major rioting and civil disorder broke out in Ardoyne, north Belfast, Northern Ireland. In some of the worst rioting in years, 113 police officers were injured in clashes which followed a July 12 parade. Police were attacked when trying clear the path for about 100 Orangemen returning from the parade to go through the Catholic Ardoyne area.

The Royal Ulster Constabulary Band was the public duties branch of the Royal Ulster Constabulary of Northern Ireland. It was formed in 1905 under District Inspector George C. Ferguson as the Band of the Royal Irish Constabulary. Shortly after the reformation of the RIC as the Royal Ulster Constabulary, the band remained on in that force. The original members were drawn from British military bands, with the band representing 28 independent British Army battalions by 1936. It performed regularly ay many official functions in Belfast as well as special occasions. It was the primary performer of the RUC marchpast, The Young May March. In 1977, a drum corps was created. The band also maintained a pipe and drums band. The pipes and drums were regarded as one of the best in the world. It was a grade 1 pipe band in the 1980s and 1990s. It was dissolved in 2001 with the establishment of the Police Service of Northern Ireland and the PSNI Pipes and Drums.