Made of silver and 36 mm in diameter, the medal was designed by David Wynne and produced by the Royal Mint. The obverse bears a right facing effigy of Queen Elizabeth II wearing the Imperial State Crown. In relief around the edge is the inscription ELIZABETH II DEI GRATIA REGINA FID.DEF. The reverse depicts a harp, its upper left frame in the form of the head shoulders and wings of an angel. Above the harp a high relief crown. Surrounding the design are the words ULSTER DEFENCE REGIMENT. The medal hangs from a 32 mm dark green ribbon with a golden yellow centre stripe flanked by thin red stripes. [5]

The award of "UDR specific" long service medals had complex rules which meant that not very many were ever issued. The UDR medal was only issued to 1,254 members of the 40,000 who served. From 1995 to 2008, 57 clasps were also issued. In that period, 35 medal applications and 3 clasp applications were refused. [6]

The Ulster Defence Regiment (UDR) was an infantry regiment of the British Army established in 1970, with a comparatively short existence ending in 1992. Raised through public appeal, newspaper and television advertisements, their official role was the "defence of life or property in Northern Ireland against armed attack or sabotage" but unlike troops from Great Britain they were never used for "crowd control or riot duties in cities". At the time the UDR was the largest infantry regiment in the British Army, formed with seven battalions plus another four added within two years. 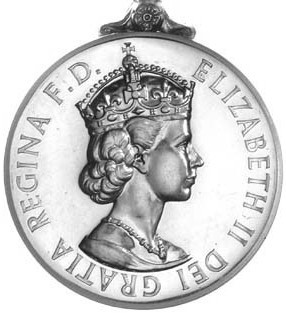 3rd Battalion, Ulster Defence Regiment was formed in 1970 as part of the seven original battalions specified in The Ulster Defence Regiment Act 1969, which received Royal Assent on 18 December 1969 and was brought into force on 1 January 1970. It was, along with the rest of the regiment, amalgamated with the Royal Irish Rangers in 1992 to form the Royal Irish Regiment.

5th Battalion, Ulster Defence Regiment was formed in 1970 as part of the seven original battalions specified in The Ulster Defence Regiment Act 1969, which received Royal Assent on 18 December 1969 and was brought into force on 1 January 1970. It was, along with the rest of the regiment, amalgamated with the Royal Irish Rangers in 1992 to form the Royal Irish Regiment. 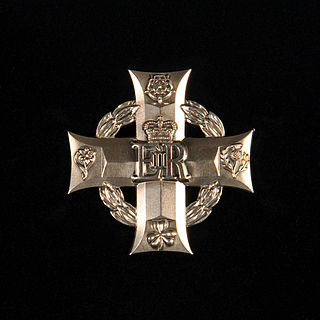 The Elizabeth Cross is a commemorative emblem given to the recognised next of kin of members of the British Armed Forces killed in action or as a result of a terrorist attack after the Second World War. It bears the name of the current British monarch, Queen Elizabeth II. 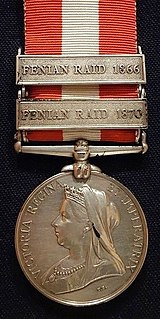 The Canada General Service Medal was a campaign medal awarded by the Canadian Government to both Imperial and Canadian forces for duties related to the Fenian raids between 1866 and 1871. The medal was initially issued in 1899 and had to be applied for. The application period was later extended to 1907, then to 1928.

Brigadier Henry Joseph Patrick Baxter was an Irish born fourth generation soldier who overcame the handicap of being blind in one eye to join the army and rose to command one of the largest and most controversial regiments in the British Army.