The African Police Medal for Meritorious Service is circular, of silver. The obverse bears a crowned and uniformed effigy of George V surrounded by the inscription GEORGIVS V REX ET IND : IMP :. The reverse depict the Tudor Crown surmounted by a crowned lion encircled by a wreath tied at the base. Surrounding the central design is the inscription FOR MERITORIOUS SERVICE IN THE POLICE • AFRICA •. [5]

The medal is suspended from a claw suspension with a ring through its ribbon. The ribbon is yellow with edges of red. 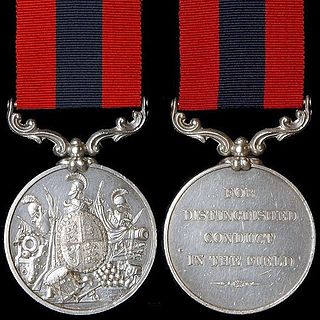 The British Empire Medal (BEM) is a British and Commonwealth award for meritorious civil or military service worthy of recognition by the Crown. The current honour was created in 1922 to replace the original medal, which had been established in 1917 as part of the Order of the British Empire.

The Meritorious Service Medal is a decoration that is, within the Canadian system of honours, one of the two Meritorious Service Decorations gifted by the Canadian monarch, through the Governor-in-Council. Created in 1991, the medal is intended to recognize individuals—both Canadian and foreign—who have carried out meritorious acts bringing benefit and honour in either of two categories: military and civilian. Award of the medal grants recipients the ability to use the post-nominal letters MSM. 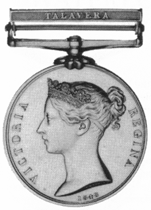 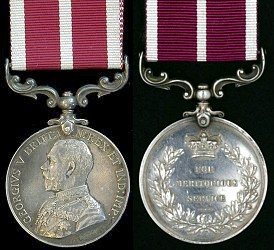 The Canada Medal was an honour created in 1943 as part of an attempt to establish an indigenous honours system in Canada. It was meant to serve as the highest award that could be awarded to civilians and military personnel. 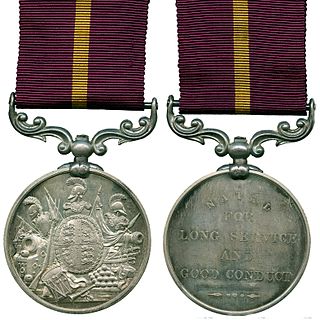 The Meritorious Conduct Medal was a Rhodesian military decoration for brave and gallant conduct.

The Uganda Intelligence Department (UID) was an organisation mobilised at short notice by the colonial government in the Uganda Protectorate at the start of World War 1. The National Archives 'British Army medal index cards 1914–1920 records list at least 20 people affiliated with the UID; although all those listed below may not have been serving concurrently as mobilisation dates on medal cards do vary.

Brigadier-General William Francis Howard Stafford was a British Army officer who served with the Royal Engineers in various campaigns in the late 19th and early 20th centuries. Towards the end of his career, he was in command of the South Irish coastal defences.