This section is about the (mod n) notation. For the binary mod operation, see modulo operation.

The prototypical example of a congruence relation is congruence modulo

on the set of integers. For a given positive integer

have the same remainder when divided by

is a multiple of 10, or equivalently since both

have a remainder of

) is compatible with both addition and multiplication on the integers. That is,

The corresponding addition and multiplication of equivalence classes is known as modular arithmetic. From the point of view of abstract algebra, congruence modulo

is a congruence relation on the ring of integers, and arithmetic modulo

occurs on the corresponding quotient ring.

For example, a group is an algebraic object consisting of a set together with a single binary operation, satisfying certain axioms. If

is a group with operation

, a congruence relation on

is an equivalence relation

on the elements of

. For a congruence on a ring, the equivalence class containing 0 is always a two-sided ideal, and the two operations on the set of equivalence classes define the corresponding quotient ring.

The general notion of a congruence relation can be formally defined in the context of universal algebra, a field which studies ideas common to all algebraic structures. In this setting, a relation

on a given algebraic structure is called compatible if

defined on the structure: whenever

A congruence relation on the structure is then defined as an equivalence relation that is also compatible. [3] [4]

is a homomorphism between two algebraic structures (such as homomorphism of groups, or a linear map between vector spaces), then the relation

is a congruence relation on

. By the first isomorphism theorem, the image of A under

is a substructure of B isomorphic to the quotient of A by this congruence.

On the other hand, the relation

Thus, there is a natural correspondence between the congruences and the homomorphisms of any given structure.

Congruences of groups, and normal subgroups and ideals

In the particular case of groups, congruence relations can be described in elementary terms as follows: If G is a group (with identity element e and operation *) and ~ is a binary relation on G, then ~ is a congruence whenever:

Conditions 1, 2, and 3 say that ~ is an equivalence relation.

A congruence ~ is determined entirely by the set {a ∈ G : a ~ e} of those elements of G that are congruent to the identity element, and this set is a normal subgroup. Specifically, a ~ b if and only if b−1 * a ~ e. So instead of talking about congruences on groups, people usually speak in terms of normal subgroups of them; in fact, every congruence corresponds uniquely to some normal subgroup of G.

Ideals of rings and the general case

A more general situation where this trick is possible is with Omega-groups (in the general sense allowing operators with multiple arity). But this cannot be done with, for example, monoids, so the study of congruence relations plays a more central role in monoid theory.

The general notion of a congruence is particularly useful in universal algebra. An equivalent formulation in this context is the following: [4]

The lattice Con(A) of all congruence relations on an algebra A is algebraic.

In a group a congruence is determined if we know a single congruence class, in particular if we know the normal subgroup which is the class containing the identity. Similarly, in a ring a congruence is determined if we know the ideal which is the congruence class containing the zero. In semigroups there is no such fortunate occurrence, and we are therefore faced with the necessity of studying congruences as such. More than anything else, it is this necessity that gives semigroup theory its characteristic flavour. Semigroups are in fact the first and simplest type of algebra to which the methods of universal algebra must be applied… [5] 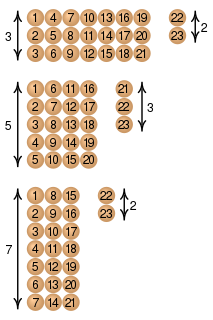 In number theory, the Chinese remainder theorem states that if one knows the remainders of the Euclidean division of an integer n by several integers, then one can determine uniquely the remainder of the division of n by the product of these integers, under the condition that the divisors are pairwise coprime. 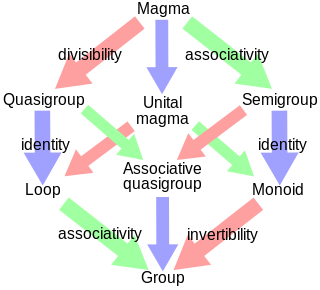 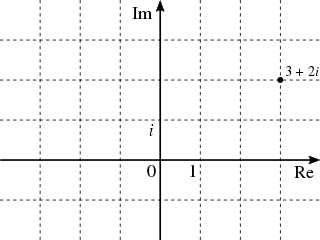 In number theory, a Gaussian integer is a complex number whose real and imaginary parts are both integers. The Gaussian integers, with ordinary addition and multiplication of complex numbers, form an integral domain, usually written as Z[i]. This integral domain is a particular case of a commutative ring of quadratic integers. It does not have a total ordering that respects arithmetic.

In ring theory, a branch of abstract algebra, a quotient ring, also known as factor ring, difference ring or residue class ring, is a construction quite similar to the quotient groups of group theory and the quotient spaces of linear algebra. It is a specific example of a quotient, as viewed from the general setting of universal algebra. Starting with a ring R and a two-sided ideal I in R, a new ring, the quotient ring R / I, is constructed, whose elements are the cosets of I in R subject to special + and ⋅ operations.

In number theory and algebraic geometry, a modular curveY(Γ) is a Riemann surface, or the corresponding algebraic curve, constructed as a quotient of the complex upper half-plane H by the action of a congruence subgroup Γ of the modular group of integral 2×2 matrices SL(2, Z). The term modular curve can also be used to refer to the compactified modular curvesX(Γ) which are compactifications obtained by adding finitely many points to this quotient. The points of a modular curve parametrize isomorphism classes of elliptic curves, together with some additional structure depending on the group Γ. This interpretation allows one to give a purely algebraic definition of modular curves, without reference to complex numbers, and, moreover, prove that modular curves are defined either over the field of rational numbers Q or a cyclotomic field Q(ζn). The latter fact and its generalizations are of fundamental importance in number theory.

In mathematics and computer science, the syntactic monoid of a formal language is the smallest monoid that recognizes the language .

In mathematics, Wolstenholme's theorem states that for a prime number , the congruence

In mathematics, a canonical map, also called a natural map, is a map or morphism between objects that arises naturally from the definition or the construction of the objects. In general, it is the map which preserves the widest amount of structure, and it tends to be unique. In the rare cases where latitude in choices remains, the map is either conventionally agreed upon to be the most useful for further analysis, or sometimes the most elegant map known up to date.