Dan Steffan is an American cartoonist and writer who has contributed to both mainstream and underground publications for several decades.

During the 1970s, Steffan drew for such underground titles as Bizarre Sex and Grateful Dead Comix, both published by Kitchen Sink Press.

In the early 1980s, his cartoons and comic strips appeared frequently in Heavy Metal . He co-founded the science fiction magazine Eye in 1986, and he contributed extensively to science fiction fanzines. In 1982, Steffan and Ted White teamed to launch the fanzine Pong.

His work for DC Comics during the 1990s includes inks on Animal Man #64 and cartoon art for licensed products associated with Batman: The Animated Series .

In 2008, he completed his research on the artist Ronald Clyne, and his survey of Clyne's life and career was published in Earl Kemp's ezine, e.I (December 2008). [2] Other ezines, such as Chunga, have published cartoon illustrations by Steffan.

Steffan lived for many years in Arlington, Virginia and currently resides in Portland, Oregon.

In 1994, Steffan won two FAAn Awards for Best Fan Artist and Best Fanzine, Blat!, which he co-edited with Ted White. [3] Receiving the most votes in the 1995 TransAtlantic Fan Fund competition, Steffan won a trip to the UK, and he wrote detailed humorous reports of his travels. [4]

He also received the 2009 Rotsler Award in recognition of his contributions to fan art. 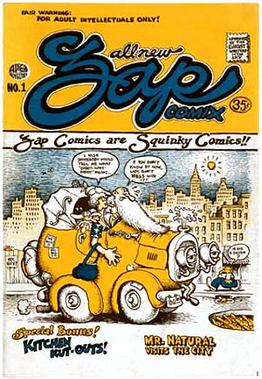 Trina Robbins is an American cartoonist. She was an early participant in the underground comix movement, and one of the first female artists in that movement. In the 1980s, Robbins became the first woman to draw Wonder Woman comics. She is a member of the Will Eisner Hall of Fame.

Denis Kitchen is an American underground cartoonist, publisher, author, agent, and the founder of the Comic Book Legal Defense Fund.

Jay Patrick Lynch was an American cartoonist who played a key role in the underground comix movement with his Bijou Funnies and other titles. He is best known for his comic strip Nard n' Pat and the running gag Um tut sut. His work is sometimes signed Jayzey Lynch. Lynch was the main writer for Bazooka Joe comics from 1967 to 1990; he contributed to Mad, and in the 2000s expanded into the children's book field.

Robert Marion Stewart, known as Bhob Stewart was an American writer, editor, cartoonist, filmmaker, and active fan who contributed to a variety of publications over a span of five decades. His articles and reviews appeared in TV Guide, Publishers Weekly, and other publications, along with online contributions to Allmovie, the Collecting Channel, and other sites. In 1980, he became the regular film columnist for Heavy Metal.

Jim Mitchell is an American underground cartoonist from Milwaukee. Mitchell was part of the late-1960s/early-1970s Milwaukee underground comix scene and a co-founder of the Krupp Comics/Kitchen Sink group.

Mervyn "Skip" Williamson was an American underground cartoonist and central figure in the underground comix movement. Williamson's art was published in the National Lampoon, High Times, the Realist, the Industrial Worker, the Chicago Seed, Encyclopædia Britannica and others. His best-known character is Snappy Sammy Smoot. 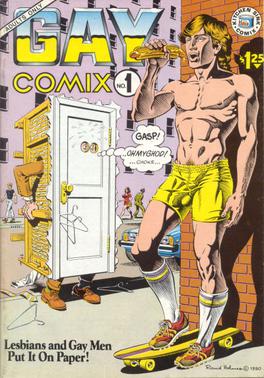 Gay Comix is an underground comics series published from 1980–1998 featuring cartoons by and for gay men and lesbians. The comic books had the tagline “Lesbians and Gay Men Put It On Paper!”

Artie Edward Romero is an American cartoonist, animator, producer, director and publisher. He began his career in comic books at a young age in the 1970s, and now is best known for his animation work.

Robert Triptow is an American writer and artist. He is known primarily for creating gay- and bisexual-themed comics and for editing Gay Comix in the 1980s, and he was identified by underground comix pioneer Lee Marrs as "the last of the underground cartoonists." 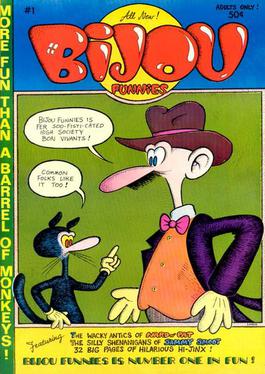 Bijou Funnies was an American underground comix magazine which published eight issues between 1968 and 1973. Edited by Chicago-based cartoonist Jay Lynch, Bijou Funnies featured strong work by the core group of Lynch, Skip Williamson, Robert Crumb, and Jay Kinney, as well as Art Spiegelman, Gilbert Shelton, Justin Green, and Kim Deitch. Bijou Funnies was heavily influenced by Mad magazine, and, along with Zap Comix, is considered one of the titles to launch the underground comix movement. 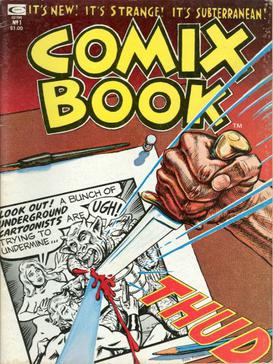 Comix Book is an underground comic book series published from 1974 to 1976, originally by Marvel Comics. It was the first comic of this type to be published by a mainstream publisher. Edited by Denis Kitchen, Comix Book featured work by such underground luminaries as Justin Green, Kim Deitch, Trina Robbins, Art Spiegelman, and S. Clay Wilson. While it did not depict the explicit content that was often featured in underground comix, it was more socially relevant than anything Marvel had previously published.

Ted Richards is an American web designer and cartoonist, best known for his underground comix.

Leonard Rifas is an American cartoonist, critic, editor, and publisher associated with underground comix, comics journalism, left-wing politics, and the anti-nuclear movement. He is notable for his contributions to the form of minicomics as well as publishing Japanese manga in the United States. Rifas' publishing company, EduComics, operated most actively from 1976 to 1982.

Carl Vaughn Frick – often credited as Vaughn Frick or simply Vaughn – is an alternative cartoonist known for the exploration of gay, environmental, HIV/AIDS awareness, and radical political themes in his comics. His Watch Out! Comix #1 (1986) was an influential gay-themed comic, one of the first by an openly gay male cartoonist. His work was also included in issues of Gay Comix,Meatmen, Strip AIDS, No Straight Lines, and So Fey, a collection of Radical Faerie fiction.

William "Willy" Murphy was an American underground cartoonist and editor. Murphy's humor focused on hippies and the counterculture. His signature character was Arnold Peck the Human Wreck, "a mid-30s beanpole with wry observations about his own life and the community around him." Murphy's solo title was called Flamed-Out Funnies; in addition, he contributed to such seminal underground anthologies as Arcade, Bijou Funnies, and San Francisco Comic Book, as well as the National Lampoon.

Zavier Leslie Cabarga, popularly known as Leslie Cabarga, is an American author, illustrator, cartoonist, animator, font designer, and publication designer. A participant in the underground comix movement in the early 1970s, he has since gone on to write and/or edit over 40 books. His art style evokes images from the 1920s and 1930s, and over the years Cabarga has created many products associated with Betty Boop. His book The Fleischer Story in the Golden Age of Animation, originally published in 1976, has become the authoritative history of the Fleischer Studios.

ProJunior, sometimes styled as Pro Junior, is an American comics character created by Don Dohler in 1958. He debuted in a fanzine in 1961, and in underground comix in 1970. Known as "Baltimore's blasphemous bad boy", the character is unusual in the underground genre for being "shared" by a number of different creators, appearing in stories by Jay Lynch, Art Spiegelman, Skip Williamson, and Robert Crumb. His main period of popularity was from 1970 to 1972.