Dana Criswell (born October 9,1963) is an American politician who has served in the Mississippi House of Representatives from the 6th district since 2016. [1] [2] 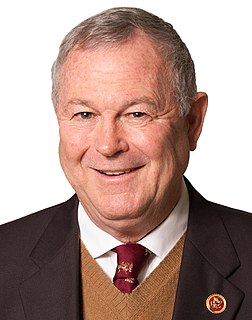 Dana Tyrone Rohrabacher is a former American politician,who served in the U.S. House of Representatives from 1989 to 2019. A Republican,he formerly represented California's 48th congressional district for the last three terms of his House tenure. 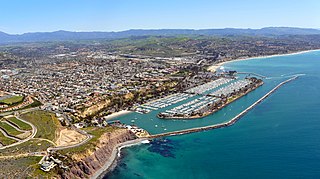 Dana Point is a city located in southern Orange County,California,United States. The population was 33,107 at the 2020 census. It has one of the few harbors along the Orange County coast,and with ready access via State Route 1,it is a popular local destination for surfing.

Criswell may refer to:

The Los Angeles City Council is the legislative body of the City of Los Angeles.

Dana Frederick White Jr. is an American businessman and the current President of the Ultimate Fighting Championship (UFC),which is the largest mixed martial arts (MMA) organization in the world. Under White's leadership,the UFC has grown into a globally popular multibillion-dollar enterprise. In August of 2019,White's net worth was estimated at $500 million.

New York City Emergency Management (NYCEM) was originally formed in 1996 as part of the Mayor's Office under Rudolph W. Giuliani. By a vote of city residents in 2001 it became an independent agency,headed by the commissioner of emergency management. In 2006 the office was reorganized under the deputy mayor for administration by Mayor Michael Bloomberg. 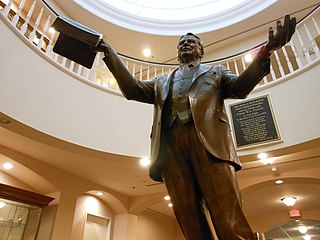 Criswell College is a private Christian college and divinity school in Dallas,Texas. The college's stated mission is to provide ministerial and professional higher education for men and women preparing to serve as Christian leaders throughout society,while maintaining an institutional commitment to biblical inerrancy.

The Dana–Thomas House is a home in Prairie School style designed by architect Frank Lloyd Wright. Built 1902–04 for patron Susan Lawrence Dana,it is located along East Lawrence Avenue in Springfield,Illinois. The home reflects the mutual affection of the patron and the architect for organic architecture,the relatively flat landscape of the U.S. state of Illinois,and the Japanese aesthetic as expressed in Japanese prints.

Dana Marie Perino is an American political commentator and author who served as the 26th White House Press Secretary,under President George W. Bush from September 14,2007,to January 20,2009. She was the second female White House Press Secretary,after Dee Dee Myers,who served during the Clinton Administration. She is currently a political commentator for Fox News,while also serving as a co-host of the network's talk show The Five,and is a book publishing executive at Random House. On October 2,2017,she began hosting The Daily Briefing with Dana Perino on Fox News. In early 2021,Perino left The Daily Briefing to co-anchor America's Newsroom with Bill Hemmer.

Vance Criswell McCormick was an American politician and prominent businessman from Harrisburg,Pennsylvania. He served as mayor of Harrisburg from 1902 to 1905 and as United States Democratic National Committee chairman from 1916 to 1919. He was appointed chair of the American delegation at the Treaty of Versailles in 1919,under President Woodrow Wilson. 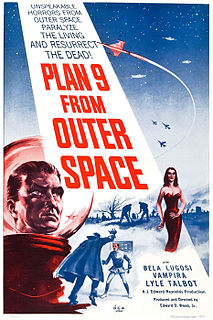 Plan 9 from Outer Space is a 1957 independently made American black-and-white science fiction-horror film,produced,written,directed,and edited by Ed Wood. The film was shot in November 1956,and had a theatrical preview screening on March 15,1957 at the Carlton Theatre in Los Angeles. It later went into general release on July 22,1959 in Texas and several other southern states re-titled Plan 9 from Outer Space,before being sold to television in 1961. 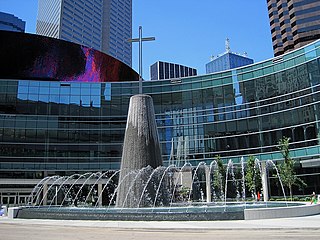 First Baptist Dallas is a Southern Baptist megachurch located in Dallas,Texas. It was established in 1868 and,as of 2018,has a congregation of about 13,000. In 2017,weekly attendance for worship services was reported around 3,700 and online attendance was over 10,000 The church,considered influential among evangelical Christians in the United States,also owns and operates a school,several radio stations,and Dallas Life,a mission for the homeless on the southern edge of Downtown Dallas. The current pastor is Dr. Robert Jeffress.

Saybrook University is a private non-profit graduate university in Pasadena,California. It was founded in 1971 by Eleanor Camp Criswell and others. It offers postgraduate education with a focus on humanistic psychology. It features low residency,master's and doctoral degrees and professional certification programs. The university is regionally accredited by the Senior Colleges and Universities Commission of the Western Association of Schools and Colleges (WASC). The university is classified as a Research Doctoral:Humanities/social sciences-dominant institution by the Carnegie Classification of Institutions of Higher Education. As of Fall of 2017 the university had 785 students enrolled. The university reports 222 full time and part time academic faculty.

Super Adventure Team was an American comedy series shown on the cable television network MTV in 1998. It was produced in the style of Thunderbirds from the 1960s,with live action marionettes,but had more adult themes and suggestive situations. Much of the humor was derived from the characters' complicated personal lives overshadowing their missions to save the world.

Deanna Lee Criswell was an American girl from Washington state who was murdered by firearm at age 16 and remained unidentified for 27 years. Criswell's body was found on November 25,1987 in Marana,Arizona,near Tucson. The Marana Police Department announced her identification on February 11,2015,aided by the sophisticated technology of forensic facial reconstruction and DNA analysis,and by websites set up by amateurs to help identify missing and unidentified persons.

The 2018 United States House of Representatives election in South Dakota was held on November 6,to elect the U.S. Representative for South Dakota's at-large congressional district. The election coincided with other statewide,legislative,and local elections.

The 2022 Michigan Attorney General election will be held on November 8,2022,to elect the Attorney General of the state of Michigan. Incumbent Democratic Attorney General Dana Nessel is running for re-election to a second term. She was first elected in 2018 with 49.0% of the vote.