Dunkirk is a 1958 British war film directed by Leslie Norman that depicts the Dunkirk evacuation of World War II, and starring John Mills, Richard Attenborough, and Bernard Lee. [4] [5] The film is based on the novels The Big Pick-Up by Elleston Trevor and Dunkirk co-authored by Lt Col Ewan Butler and Major J. S. Bradford. [6]

In May 1940, English journalist Charles Foreman strives to inform his readers of the dangers posed by the build-up of German forces in western Europe. He rails against the Ministry of Information for suppressing the truth. Most of his compatriots, including his neighbour John Holden, have been lulled into complacency by the lack of significant fighting during the "Phoney War". Holden owns a garage, with a profitable side-line manufacturing belt buckles for the British Army.

The Battle of France begins and the Germans advance rapidly, trapping Allied forces along the Channel coast. Corporal "Tubby" Binns of the British Expeditionary Force (BEF) and his depleted section return from a mission to find their company has withdrawn. Their officer dies in a German air attack, leaving Binns in charge of four demoralised men (Privates Barlow, Bellman, Fraser and Russell). They abandon a main road blocked by refugees and reach a Royal Artillery battery camp, where Fraser is killed in a battle. Binns is ordered to head north with his three remaining men and two other stragglers, Privates Harper and Miles, and try to find their regiment.

Meanwhile, the situation has become so desperate that BEF commander General Gort orders all units to head for Dunkirk in the hope of evacuation. In England, Vice-Admiral Ramsay directs Operation Dynamo; the Admiralty begins commandeering all suitable civilian boats, including those owned by Foreman and Holden, to sail to Dunkirk to help evacuate troops from the beaches. The boats are marshalled at Sheerness. Foreman insists on taking his motorboat Vanity to Dunkirk himself, despite warnings of the danger. Other boat owners follow his example. After initial reluctance, Holden decides to take his boat Heron too, assisted by his teenage apprentice Frankie.

Binns' section spend the night in an abandoned farmhouse, but at dawn, a German unit arrives and Bellman is badly wounded. Russell suffers concussion from a grenade blast. The section manages to escape, but are forced to leave Bellman behind. Later, after dodging a German camp under cover of darkness, they encounter a RAF lorry, manned by Airmen Froome and Pannet, and go with them to Dunkirk, where Allied troops are being subjected to regular aerial bombing and strafing. In the harbour, Binns and his men get aboard a ship, only for it to be blown up and sunk before it can depart. Their prospects of rescue are made worse by the Admiralty's decision to withdraw its destroyers. Ramsay argues against withdrawal of the destroyers and, crucially, the Admiralty agrees to send them back.

Foreman and Holden ferry many soldiers to the larger vessels, but Foreman's boat is destroyed by a bomber. He is picked up by Holden. With harbour operations no longer possible, thousands of Allied troops are gathering on the beaches. In the next Luftwaffe attack, Barlow is wounded and taken to an aid station. Heron's engine breaks down just off the beach. While Russell, a motor mechanic, attempts to effect repairs, Foreman and Frankie go ashore to survey the scene. Next day, during church parade, Foreman is mortally wounded in an air attack. Russell completes his repairs and Binns' group board the boat. Joined by six more soldiers, Holden sets sail for home. At sea, the engine breaks down again and the boat drifts towards the German-held port of Calais. Fortunately, they are spotted by one of the returning destroyers and taken safely back to England.

Beach sequences were shot at Camber Sands near Rye, East Sussex, and Dunkirk town centre was recreated using part of Rye Harbour. A canal-type bridge was temporarily constructed over the upper harbour, leading on to the quayside. It was over this bridge that the refugees and troops poured into the "town centre". Several scenes take place at this location, particularly a tracking shot following two British Army officers as they discuss the situation. In the background, the viewer can make out Rye Church and some old warehouses, still extant, albeit in much restored condition. One of the warehouses was used as the interior for the "Barn Scene".[ citation needed ] The scene where the bridge was blown during the early part of the film was on the River Medway at Teston Bridge, Teston in Kent. [7]

Dunkirk was bloody difficult to make from a logistics point of view. Yet it was made for £400,000 and came in under budget... I was the council school boy who became a major in the war, and that had a lot to do with the way I felt about Dunkirk. I didn't think that Dunkirk was a defeat; I always thought it was a very gallant effort but not a victory.

The musical score is by Malcolm Arnold, which may account for the fact that many of its segments sound very much like his Academy Award-winning theme from The Bridge on the River Kwai , made the previous year (1957).[ citation needed ] 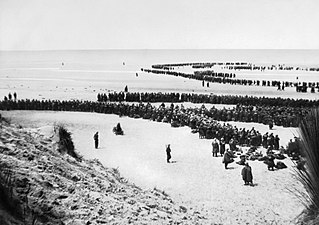 The Dunkirk evacuation, codenamed Operation Dynamo and also known as the Miracle of Dunkirk, or just Dunkirk, was the evacuation of more than 338,000 Allied soldiers during the Second World War from the beaches and harbour of Dunkirk, in the north of France, between 26 May and 4 June 1940. The operation commenced after large numbers of Belgian, British, and French troops were cut off and surrounded by German troops during the six-week Battle of France. In a speech to the House of Commons, British Prime Minister Winston Churchill called this "a colossal military disaster", saying "the whole root and core and brain of the British Army" had been stranded at Dunkirk and seemed about to perish or be captured. In his "We shall fight on the beaches" speech on 4 June, he hailed their rescue as a "miracle of deliverance". 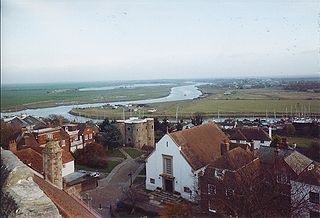 Rye is a small town and civil parish in the Rother district, in East Sussex, England, two miles from the sea at the confluence of three rivers: the Rother, the Tillingham and the Brede. In medieval times, as an important member of the Cinque Ports confederation, it was at the head of an embayment of the English Channel, and almost entirely surrounded by the sea.

Admiral Sir Bertram Home Ramsay, KCB, KBE, MVO was a Royal Navy officer. He commanded the destroyer HMS Broke during the First World War. In the Second World War, he was responsible for the Dunkirk evacuation in 1940 and planning and commanding the naval forces in the invasion of France in 1944. 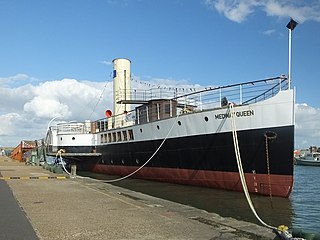 The PS Medway Queen is a paddle driven steamship, the only mobile estuary paddle steamer left in the United Kingdom. She was one of the "little ships of Dunkirk", making a record seven trips and rescuing 7,000 men in the evacuation of Dunkirk. 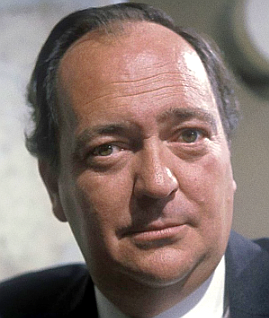 Alan Edgar Stratford Johns, known as Stratford Johns, was a British stage, film and television actor who is best remembered for his starring role as Detective Inspector Charlie Barlow in the innovative and long-running BBC police series Z-Cars. 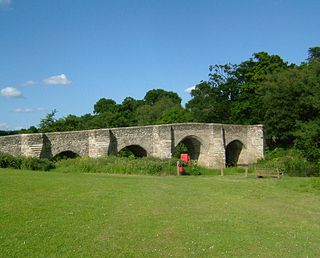 Teston /ˈtiːstən/ or /ˈtiːsən/ is a village in the Maidstone District of Kent, England. It is located on the A26 road out of Maidstone, four miles (6.4 km) from the town centre. There is a narrow stone bridge over the River Medway here. 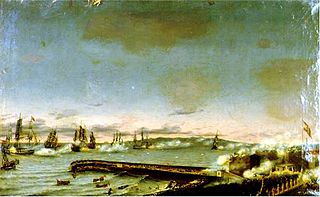 The Battle of Santa Cruz de Tenerife was an amphibious assault by the Royal Navy on the Spanish port city of Santa Cruz de Tenerife in the Canary Islands. Launched by Rear-Admiral Horatio Nelson on 22 July 1797, the assault was defeated, and on 25 July the remains of the landing party withdrew under a truce, having lost several hundred men. Nelson himself had been wounded in the arm, which was subsequently partially amputated: a stigma that he carried to his grave as a constant reminder of his failure.

Rodney Diak was a British film, television, and theater actor 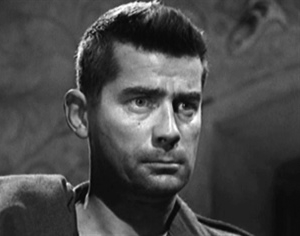 Sir Christopher George Rhodes, 3rd Baronet was an English film and television actor. He was awarded the Croix de Guerre and the United States Legion of Merit for his Second World War service.

The Little Ships of Dunkirk were about 850 private boats that sailed from Ramsgate in England to Dunkirk in northern France between 26 May and 4 June 1940 as part of Operation Dynamo, helping to rescue more than 336,000 British, French, and other Allied soldiers who were trapped on the beaches at Dunkirk during the Second World War.

Dunkirk is a 2004 BBC Television factual about the Battle of Dunkirk and the Dunkirk evacuation in World War II.

Weekend at Dunkirk is a 1964 war drama film directed by Henri Verneuil and starring Jean-Paul Belmondo. It is based on the 1949 Prix Goncourt winning novel Week-end at Zuydcoote by Robert Merle. 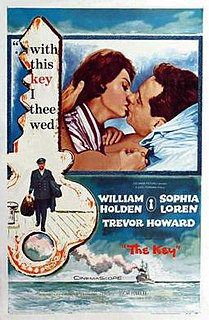 The Key is a 1958 British-American war film set in 1941 during the Battle of the Atlantic. It was based on the 1951 novel Stella by Jan de Hartog and was directed by Sir Carol Reed. William Holden, Sophia Loren and Trevor Howard starred in the production. 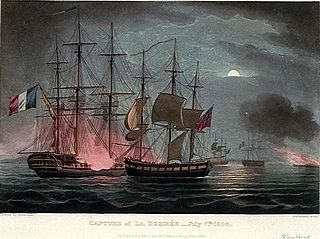 The Raid on Dunkirk of 7 July 1800 was an attack by a British Royal Navy force on the well-defended French anchorage of Dunkirk in the English Channel during the French Revolutionary Wars. French naval forces had been blockaded in their harbours during the conflict, and often the only method of attacking them was through fireships or "cutting-out" expeditions, in which boats would carry boarding parties into the harbour at night, seize ships at anchor and bring them out. The attack on Dunkirk was a combination of both of these types of operation, aimed at a powerful French frigate squadron at anchor in Dunkirk harbour. The assault made use of a variety of experimental weaponry, some of which was tested in combat for the first time with mixed success. 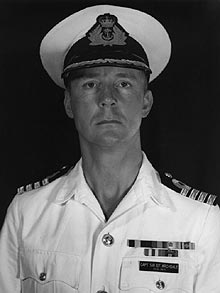 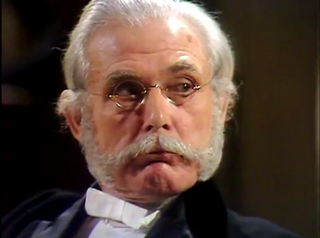 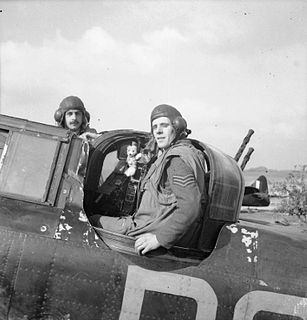 Edward Rowland Thorn,, also known as Roland Thorn, was a Royal Air Force pilot, squadron commander and a notable flying ace of the Second World War. He and his turret gunner shot down 12 enemy aircraft over the Dunkirk evacuation beaches and during the Battle of Britain. Thorn survived the war but was killed in a crash of an early jet fighter in 1946. 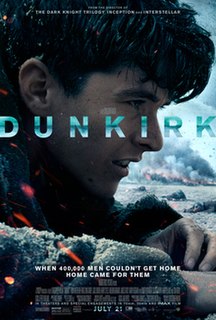 The 1944 King's Birthday Honours, celebrating the official birthday of King George VI, were announced on 2 June 1944 for the United Kingdom and British Empire, New Zealand, and South Africa.