Edmond Montague Grant (born 5 March 1948) [10] is a Guyanese–British singer, songwriter and multi-instrumentalist, known his genre-blending sound; his music has blended elements of electronic pop, reggae, British rock, African polyrhythms, soul, funk and Latin samba, among many others. [11] In addition to this, he also helped to pioneer the genre of ringbang. [5] He was a founding member of The Equals, one of the United Kingdom's first racially-integrated pop groups. His subsequent solo career included the platinum single "Electric Avenue", which is his biggest international hit.

Grant was born in Plaisance, British Guiana, later moving to Linden. [12] [13] His father, Patrick, was a trumpeter who played in Nello and the Luckies. [13] While at school, his parents lived and worked in the United Kingdom, sending back money for his education. [13] In 1960, he emigrated to join his parents in London. [14] He lived in Kentish Town and went to school at the Acland Burghley Secondary Modern at Tufnell Park, where he learned to read and write music. [15] He became a big fan of Chuck Berry, and after seeing him play at the Finsbury Park Astoria decided on a career in music. [15] [16]

In 1965, Grant formed the Equals, playing guitar and singing background vocals, and the band had two hit albums and a minor hit with the single "I Get So Excited" before having a number one hit in 1968 with his song "Baby Come Back". [17] The tune also topped the UK Singles Chart in 1994, when covered by Pato Banton featuring Robin and Ali Campbell of the reggae group UB40. [18] The Equals had five further top 40 hits in the UK up to the end of 1970. [19] The Baby Come Back album featured a song by Grant titled "Police on My Back," which was recorded by the Clash for their 1980 album Sandinista! . [20] Willie Nile released his version of "Police on My Back" on his Streets of New York CD. [21] The Equals' song "Green Light" co-written by Grant from their 1968 album Supreme, was recorded by the Detroit Cobras, for their 2007 album, Tied & True . [22]

In this period he also worked as a songwriter and producer for other artists, including the Pyramids (producing their debut single "Train Tour to Rainbow City") and Prince Buster, for whom he wrote "Rough Rider", and started the Torpedo record label, releasing British-made reggae singles. [14]

On 1 January 1971, Grant suffered a heart attack and collapsed lung, leading to his departure from the Equals to concentrate on production, opening his own Coach House Studios in the grounds of his Stamford Hill home in 1972, and starting Ice Records in 1974, initially distributed by Pye Records and later by Virgin Records. [12] [14] [15] He produced the Pioneers' 1976 album Feel the Rhythm, as well as early recordings by his younger brother Rudy, working under the name the Mexicano. [14] During this time he also branched out of music, learning to tap dance, and subsequently trying his hand at acting at the behest of fellow Guyanese immigrant, actor Norman Beaton. [23]

A self-titled solo album released in 1975 made little impact, as did the proto-soca Message Man , completed and released in 1977, on which Grant played all the instruments himself. [14] His breakthrough as a solo artist came two years later with the album Walking on Sunshine , which spawned the UK top 20 hit "Living on the Frontline". [14] He returned to the charts in 1980 with the top 10 hit "Do You Feel My Love", the opening track of Can't Get Enough , the 1981 album giving him his first entry in the UK Albums Chart. [24] The album included two further hit singles, "Can't Get Enough of You" and "I Love You, Yes I Love You". [24]

From 1982 onward Grant was based in Barbados (where he opened his Blue Wave Studios), the same year releasing his most successful album, Killer on the Rampage , which included his two biggest solo hits, "I Don't Wanna Dance", which spent three weeks at number one in the UK as well as selling well internationally, and "Electric Avenue", which reached no. 2 in both the UK and the US. [14] [16] [24] He also began producing and promoting local artists such as David Rudder, Mighty Gabby, Tamu Hibbert, and Grynner. [14] A lean period followed; his 1984 title song for the movie Romancing the Stone was cut from the film and stalled outside the UK top 50 when released as a single, although it fared better in the US and Canada. [14] His albums Going for Broke (1984), Born Tuff (1987), and File Under Rock (1988) failed to chart and produced no further hit singles. [14]

Grant returned to the charts in 1988 with the anti-apartheid single "Gimme Hope Jo'anna", a no. 7 hit in the UK. [14] [15] [24] The song was banned by the South African government. [25] In the late 1980s he pursued other business interests including music publishing and a nightclub, and built up the success of his Blue Wave studio, which was used by the Rolling Stones, Sting, Cliff Richard, and Elvis Costello. [15] [14]

Grant continued releasing albums in the 1990s, including Barefoot Soldier (1990), Paintings of the Soul (1992), Soca Baptism (1993), and Hearts and Diamonds (1999). [14] In 1994 he introduced a new genre, ringbang, at the Barbados Crop Over festival. [14] [26] Grant said of ringbang: "What ringbang seeks to do is envelop all the rhythms that have originated from Africa so that they become one, defying all geographical boundaries." [14] In 2000 he organised the Ringbang Celebration festival in Tobago. [14] In 2001, a remix of "Electric Avenue" reached no. 5 in the UK and an attendant Greatest Hits album reached no. 3 in that country. [27]

In 2008, Grant performed at Nelson Mandela's 90th birthday concert, and also played several dates in the UK, including the Glastonbury Festival. [25]

In 2016, it was announced that Grant would receive a Lifetime Achievement Award from the government of Guyana. [29] He was previously honored with a postage stamp featuring his likeness and Ringbang logo by the Guyana Post Office Corporation in 2005. [30]

Barrington Ainsworth Levy is a Jamaican reggae and dancehall artist.

Pato Banton is a reggae singer and toaster from Birmingham, England. He received the nickname "Pato Banton" from his stepfather; The first name derives from a Jamaican night owl that stays up all night calling "patoo, patoo" and the last name from the disc jockey slang word "Banton" which means heavyweight lyricist or storyteller. In 1994, he achieved a number 1 on the UK Singles Chart with a cover of The Equals' Baby Come Back featuring Robin and Ali Campbell of UB40.

Chutney music is a fusion genre of Indian folk music, specifically Bhojpuri folk music, with local Caribbean calypso and soca music, and later on Bollywood music. This genre of music that developed in Trinidad and Tobago is popular in Trinidad and Tobago, Guyana, Suriname, Jamaica, other parts of the Caribbean, Fiji, Mauritius, and South Africa. Chutney music emerged mid-20th century and reached a peak of popularity during the 1980s. Several sub-genres have developed.

Ky-Mani Marley is a Jamaican reggae and hip-hop artist. His name is of East African origin, and means "Adventurous Traveler". He is the only child of Bob Marley with Anita Belnavis, a Jamaican table tennis champion. In 2001, he received a Grammy Award nomination for his album, Many More Roads. 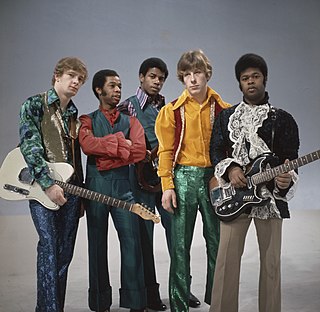 The Equals are an English pop, R&B and rock group formed in North London in 1965. They are best remembered for their million-selling chart-topper "Baby, Come Back", though they had several other chart hits in the UK and Europe. Eddy Grant founded the group with John Hall, Pat Lloyd, and brothers Derv and Lincoln Gordon, and they were noted as being "the first major interracial rock group in the UK" and "one of the few racially mixed bands of the era".

Alphonsus Celestine Edmund Cassell MBE was a Montserratian calypso and soca musician, regarded as the first superstar of soca from Montserrat. He performed under the stage name Arrow. Internationally, his biggest hit song was "Hot Hot Hot" (1982), known from the original by Arrow and numerous later versions by other musicians.

Alison Amanda Hinds is a British-born Bajan soca artist based in Barbados. She is one of the most popular soca singers in the world and has been given the nickname the "Queen of Soca".

Walking on Sunshine is the second studio album by Guyanese-British musician Eddy Grant, originally released in 1978 by Ice Records. Recorded at Grant's Stamford Hill recording studio, the album was the follow-up to his solo debut Message Man (1977) and fuses styles of Caribbean music like reggae, soca and calypso with other genres, including funk and pop. The musician played most of the album's instrumentation himself, and described the record as reflecting his joyousness. However, some songs feature tough cultural themes, particularly those on the first side. 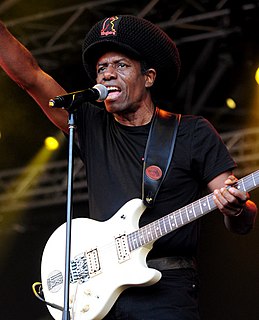 Eddy Grant has released 15 studio albums, 13 compilation albums and 19 singles. His album Killer on the Rampage peaked at number 10 on the Billboard 200 chart in the US and was certified gold. His single "Electric Avenue" received Platinum accreditation in the US, and "I Don't Wanna Dance" topped the charts in five countries including Belgium, Ireland and his native UK. In 2001, his ringbang remix of "Electric Avenue" reached number 5 in the UK Singles Chart. 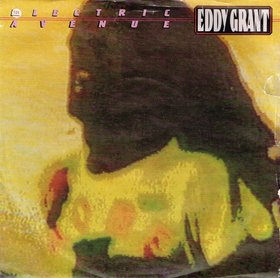 "Electric Avenue" is a song written, recorded and produced by British singer and songwriter Eddy Grant, who released it on his 1982 album Killer on the Rampage. In the United States, with the help of the MTV video he shot for it, it was one of the biggest hits of 1983. The song refers to the Electric Avenue in London, and to the 1981 Brixton riot in the Brixton district of the city.

"Gimme Hope Jo'anna" is a British anti-apartheid song written and originally released by Eddy Grant in 1988, during the apartheid era in South Africa. The song was banned by the South African government when it was released, but was widely played there nonetheless. It reached number seven on the UK Singles Chart, becoming Grant's first British top 10 hit for five years.

Citizens or residents of the United Kingdom whose origins lie in Guyana are a part of the country's British Caribbean community. Guyana was a former British colony, British Guiana, responsible for moving large numbers of Africans and Indians for labor in the sugar industry. British Guyanese are notable for their contributions to literature and music.

Rudolph Grant, also known as Little Brother Grant, Rudy Grant and The Mexicano, is a reggae deejay and singer.

Baby, Come Back is an album by British group The Equals, which was released in the U.S. by RCA Victor, who had obtained the rights to manufacture and distribute the album in all of the Americas from the band's British label, President Records.

Ringbang is variously a Caribbean fusion of music genres, a philosophy, and an aesthetic propounded by Eddy Grant in 1994. 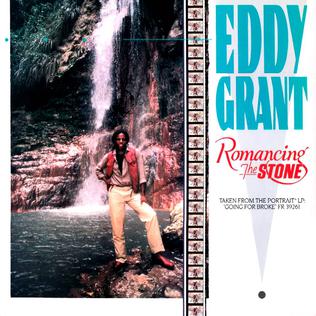 "Romancing the Stone" is a song written, recorded and produced by Eddy Grant, who released it from his 1984 album Going for Broke. It was intended for the 1984 feature film of the same name, in fact was announced by Casey Kasem on the 30 June 1984 edition of American Top 40 as the title song to the movie, but ultimately was used only briefly in the film. Clips from the film appeared in at least one official music video for the song, and the song is mentioned in the film's closing credits. 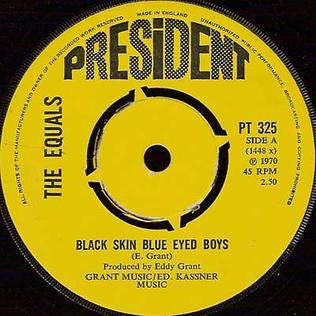 "Black Skin Blue Eyed Boys" is a song written by Guyanese-British musician Eddy Grant and recorded in London in 1970 by his band the Equals. Their recording, produced by Grant, reached number 9 on the UK Singles Chart in January 1971 and was the band's last chart hit.