Grand Avenue is a major east-west street in the city of Chicago and nearby DuPage County, although it deviates somewhat from Chicago's grid system, as it is diagonal west of Western Avenue. The street runs from the Kingery Highway (also known as U.S. Route 20 and Illinois Route 83) in Addison, east through the western suburbs, and then east-southeast into Chicago, through the Magnificent Mile shopping area, and continuing out to Navy Pier, where it ends. This is a distance of about 19 miles (31 km). [1]

Grand Avenue was originally known as Whiskey Point Road, [2] first used as a trail by the Miami, Illini and many other Native Nations, it leads to the West Side of Chicago, near Western Avenue. [3] On the Near North Side it was called Indiana Street. Thomas Jefferson Vance Owen, Chicago's first town president, is believed to have named it in 1833 after naming Chicago, "a grand place to live." [4]

Grand Avenue is serviced by many major CTA lines. The Blue Line stops at Grand at Halsted Street and Milwaukee Avenue; this stop is the first one north of The Loop. The Red Line also stops at Grand at State Street, close to the Magnificent Mile and Navy Pier. In 2007, the CTA began a renovation project at the station, which was completed in 2012. The 65 Grand bus route runs along Grand Avenue, from Nordica Avenue to Navy Pier. Pace bus route 319 serves Grand Avenue in Franklin Park, Elmwood Park, and Chicago, It runs from Fullerton/Narragansett in Chicago, to Wolf Road/North Avenue in Northlake.

The Red Line, sometimes known as the Howard-Dan Ryan Line or the North-South Line, is a rapid transit line in Chicago, run by the Chicago Transit Authority (CTA) as part of the Chicago "L" system. It is the busiest line on the "L" system, with an average of 251,813 passengers boarding each weekday in 2012. The route is 26 miles (42 km) long with a total of 33 stations, from Howard station in Rogers Park on the north side, through the State Street subway and to 95th/Dan Ryan in Roseland on the south side. Like the Blue Line, the Red Line runs 24 hours a day, 365 days a year; the CTA is one of only five rapid transit systems in the United States to do so. A proposed extension adding four new stations would extend the Red Line south from 95th/Dan Ryan to 130th Street.

Michigan Avenue is a north-south street in Chicago which runs at 100 east on the Chicago grid. The northern end of the street is at Lake Shore Drive on the shore of Lake Michigan in the Gold Coast Historic District. The street's southern terminus is at Sibley Boulevard in the southern suburb of Harvey, though like many Chicago streets it exists in several disjointed segments. 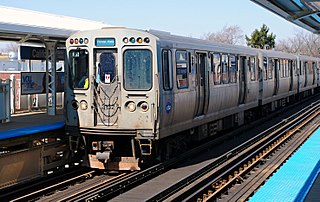 The Blue Line, also known as the O'Hare-Congress Line and the West-Northwest Line, is a 26.93-mile-long (43.34 km) Chicago "L" line which extends through the Loop from O'Hare International Airport at the far northwest end of the city, through downtown via the Milwaukee-Dearborn Subway and across the West Side to its southwest end at Forest Park, with a total of 33 stations It is the longest line on the "L" system and second busiest, with an average of 186,796 passengers boarding each weekday in September 2012.

The Green Line is a rapid transit line on the Chicago Transit Authority's "L" system. It is the only completely elevated route in the entire system; all other routes either have underground sections or sections at grade. It utilizes the system's oldest segments, extending 20.695 miles (33.305 km) with 30 stops between Forest Park and Oak Park (Harlem/Lake), through Chicago's West Side to the Loop, and then to the South Side and West Englewood (Ashland/63rd) and Woodlawn. As of September 2012, the average number of weekday boardings on the Green Line was 70,554. 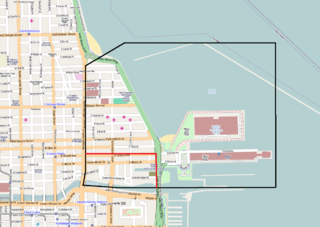 Streeterville is a neighborhood in the Near North Side community area of Chicago, Illinois, United States, north of the Chicago River. It is bounded by the river on the south, the Magnificent Mile portion of Michigan Avenue on the west, and Lake Michigan on the north and east, according to most sources, although the City of Chicago only recognizes a small portion of this region as Streeterville. Thus, it can be described as the Magnificent Mile plus all land east of it. The tourist attraction of Navy Pier extends out into the lake from southern Streeterville. The majority of the land in this neighborhood is reclaimed sandbar. 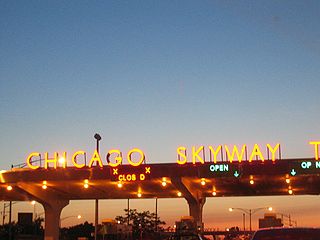 Roads and expressways in Chicago summarizes the main thoroughfares and the numbering system used in Chicago and its surrounding suburbs.

Lake Street is an east–west street in Chicago and its suburbs. Part of Lake Street is designated as U.S. Route 20. Lake Street begins in the city of Chicago and travels west and slightly north to the Chicago suburbs. It ends at the eastern terminus of the Elgin Bypass around Elgin, where U.S. 20 once was routed west through downtown Elgin onto Villa Street. This is a distance of about 34.4 miles (55.4 km). 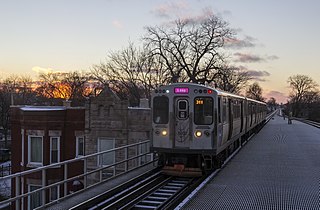 The Pink Line is an 11.2 mi (18.0 km) rapid transit line in Chicago, run by the Chicago Transit Authority (CTA) as part of the Chicago "L" system. It is the CTA's newest rail line and began operation for a 180-day trial period on June 25, 2006, running between 54th/Cermak station in Cicero, Illinois and the Loop in downtown Chicago. The route to the Loop follows tracks shared with Green Line trains on Lake Street, connected by the previously non-revenue Paulina Connector. In September 2012, the average weekday boardings on the Pink Line was 33,737. The Pink Line does not make any 'L' train transfers on the Douglas Branch. The Pink Line operates between 54th/Cermak and the Loop, weekdays from 4:05 a.m. to 1:25 a.m., and Saturdays and Sundays from 5:05 a.m. to 1:25 a.m.

Austin is a station on the Chicago Transit Authority's 'L' system. It is located between the Ridgeland and Central stations on the Green Line, which runs from Harlem/Lake and to Ashland/63rd and Cottage Grove. The station is located at the intersection of Austin Boulevard and Corcoran Place in the Austin neighborhood on Chicago's West Side and borders the village of Oak Park. 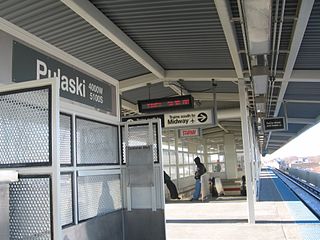 Pulaski is an elevated station on the Chicago Transit Authority's 'L' system. Pulaski serves the Orange Line, which runs between Midway Airport and The Loop; it is situated between Midway and Kedzie stations. Pulaski is located at Pulaski Road and 51st Street on the Southwest Side of Chicago, Illinois. The station is within the Archer Heights neighborhood, which is both residential and commercial, and the station itself is in a commercial district on Pulaski Road. Pulaski opened on October 31, 1993, the opening date of the Orange Line.

Grand, also known as and announced as Grand/State to differentiate it from Grand on the Blue Line, is a rapid transit station on the Red Line of the Chicago 'L'. It serves Navy Pier, which is accessible via bus on Illinois Street one block south.

Cermak Road, also known as 22nd Street, is a 19-mile-long, major east–west street on Chicago's near south and west sides and the city's western suburbs. In Chicago's street numbering system, Cermak is 2200 south, or twenty-two blocks south of the baseline, Madison Street (Chicago). Normally, one mile comprises eight Chicago blocks, but the arterial streets Roosevelt Road, formerly named Twelfth Street and at 1200 South, and Cermak Road were platted before the eight-blocks-per-mile plan was implemented. Roosevelt Road is one mile south of Madison Avenue and there are twelve blocks within that mile. Cermak Road is two miles south of Madison Avenue and there are ten blocks within the mile between Roosevelt and Cermak Roads.

North Avenue is a major east–west street in Chicago, Illinois, and its western suburbs. Starting at St. Charles's eastern border with West Chicago, its name changes from Main Street to North Avenue, just east of the Kane/DuPage county line. From there, it travels straight east, carrying Illinois Route 64 until LaSalle Drive in Chicago. Illinois Route 64 then continues north onto LaSalle Drive for a very short distance until ending at U.S. Route 41, while North Avenue continues east for less than one-half mile, changing its name to North Boulevard at Clark Street, and then continuing until its termination in a cul-de-sac at 200 East, just west of Lake Shore Drive. From Illinois Route 43 to its east end, North Avenue is within the city limits of Chicago.

The Golden Corridor is the area around the Jane Addams Memorial Tollway, formerly known as the Northwest Tollway, in the Chicago metropolitan area. Its name refers to the "gold" mine of economic profit for communities in the area. Several Fortune 500 company headquarters, office parks, industrial parks, exhibition and entertainment centers, medical facilities, hotels, shopping centers, and restaurants are in the Golden Corridor. With the exception of the O'Hare area of Chicago, all the communities in this region are part of a larger region known as the "Northwest Suburbs".

95th Street is a major east–west highway on Chicago's South Side and in the southwest suburbs, designated as 9500 South in Chicago's address system. 95th Street is 11 miles (18 km) south of Madison Street. 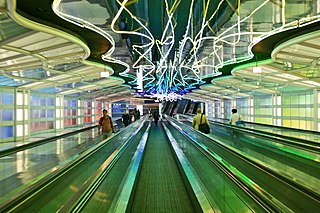 Garfield Boulevard is an east-west street on the south side of Chicago and its immediate western suburbs. Its western segment, entirely known as 55th Street, runs east from Maple Avenue in Downers Grove until it becomes Joliet Road in Countryside. Its eastern segment, known only as Garfield Boulevard from Western Avenue in Gage Park to Elsworth Drive in Washington Park, runs east from Archer Avenue and Narragansett Avenue to South Shore Drive, just west of U.S. Route 41. All of the eastern segment of 55th Street lies within the city limits of Chicago. 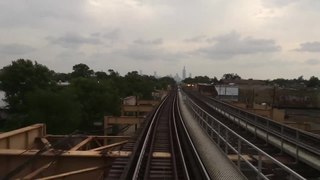 The Lake Street Elevated, also known as the Lake Branch, is a 8.75 mi (14.08 km) long branch of the Chicago "L" which is located west of the Chicago Loop and serves the Green Line for its entire length, as well as the Pink Line east of Ashland Avenue. As of February 2013, the branch serves an average of 27,217 passengers each weekday. It serves the Near West Side, East Garfield Park, West Garfield Park, and Austin neighborhoods of Chicago, as well as the suburbs Oak Park and Forest Park. It owes its name to Lake Street, the street that the branch overlooks for 6.25 mi (10.06 km) before continuing its route straight west, adjacent to South Boulevard, towards the terminus at Harlem/Lake. The branch runs from 3:50 am to 1:25 am on weekdays, 4:50 am to 1:25 am on Saturdays and Sundays/Holidays.