The president-elect of IUMS is Professor Eliora Ron of Tel Aviv University.[ when? ]

The IUMS has three divisions:

These divisions each have their own set of officers and objectives. Each division is responsible for the organization of their own International Congresses. They work together toward the goal of furthering microbiology research and communication globally. In addition to the three divisions, the IUMS also conducts scientific activities through the following:

The Virology Division governs the International Committee on Taxonomy of Viruses, which is responsible for the naming of new viruses. 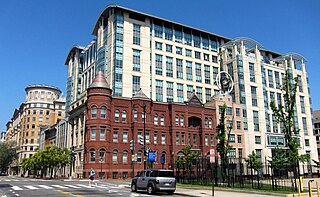 The American Society for Microbiology (ASM), originally the Society of American Bacteriologists, is a professional organization for scientists who study viruses, bacteria, fungi, algae, and protozoa as well as other aspects of microbiology. It was founded in 1899. The Society publishes a variety of scientific journals, textbooks, and other educational materials related to microbiology and infectious diseases. ASM organizes annual meetings, as well as workshops and professional development opportunities for its members.

The Royal Academies for Science and the Arts of Belgium (RASAB) is a non-governmental association which promotes and organises science and the arts in Belgium by coordinating the national and international activities of its constituent academies such as the National Scientific Committees and the representation of Belgium in international scientific organisations.

Howard Martin Temin was an American geneticist and virologist. He discovered reverse transcriptase in the 1970s at the University of Wisconsin–Madison, for which he shared the 1975 Nobel Prize in Physiology or Medicine with Renato Dulbecco and David Baltimore.

G. Balakrish Nair is an Indian microbiologist. At present, he is the Ag. Regional Adviser, Research Policy and Cooperation Unit, Department of Communicable Diseases, World Health Organization. Before joining WHO, he was the executive director of Translational Health Science and Technology Institute (THSTI), Faridabad, NCR, India. Before joining THSTI, he was working in NICED as the director. He has also served as the director of Laboratory Sciences Division at the International Center for Diarrhoeal Diseases Research,, Dhaka, Bangladesh.

The Committee on Space Research (COSPAR) was established in 1958 by the International Council for Scientific Unions (ICSU). Among COSPAR's objectives are the promotion of scientific research in space on an international level, with emphasis on the free exchange of results, information, and opinions, and providing a forum, open to all scientists, for the discussion of problems that may affect space research. These objectives are achieved through the organization of symposia, publication, and other means. COSPAR has created a number of research programmes on different topics, a few in cooperation with other scientific Unions. The long-term project COSPAR international reference atmosphere started in 1960; since then it has produced several editions of the high-atmosphere code CIRA. The code "IRI" of the URSI-COSPAR working group on the International Reference Ionosphere was first edited in 1978 and is yearly updated.

The International Committee on Taxonomy of Viruses (ICTV) authorizes and organizes the taxonomic classification of and the nomenclatures for viruses. The ICTV has developed a universal taxonomic scheme for viruses, and thus has the means to appropriately describe, name, and classify every virus that affects living organisms. The members of the International Committee on Taxonomy of Viruses are considered expert virologists. The ICTV was formed from and is governed by the Virology Division of the International Union of Microbiological Societies. Detailed work, such as delimiting the boundaries of species within a family, typically is performed by study groups of experts in the families.

Elasayed Elsayed Wagih PhD, DIC, CIDTT is an Egyptian pfofessor of virology and biotechnology and vice President of the Arab Society for Biotechnology. He was born in Alexandria, Egypt. Wagih is well known for having invented Zymoblot, the fastest available microtechnique to detect gene expression and/or enzyme activity in any biological specimen as well as the ”Mirror Image in vivo electro-blotting technique” that detects virus particles or any foreign protein in any tissue. He also discovered two viruses reported under his name in the world data bank of viruses, the first was named "Peanut Chlorotic Ringspot Virus (PCRV)" and the second was called “Peanut Top Paralysis (PTPV)".

Geoffrey Lilley Smith FRS FMedSci FRSB is a British virologist and medical research authority in the area of Vaccinia virus and the family of Poxviruses. Since 1 October 2011 he is Head of the Department of Pathology at the University of Cambridge and a Principal Research Fellow of the Wellcome Trust. Before that, he was Head of the Department of Virology at Imperial College London.

Ann M. Arvin is a pediatrician and professor of Pediatrics and Microbiology/Immunology at Stanford University. Arvin is a specialist of the Varicella zoster virus (VZV) and a prominent national figure in health. Arvin currently is chief of the infectious diseases division of pediatrics at the Lucile Packard Children's Hospital, as well as the former Stanford's vice provost and dean of research.

Polly Roy OBE is a professor and Chair of Virology at The London School of Hygiene and Tropical Medicine. She attended a number of schools which included Columbia University Medical School, Rutgers University, University of Alabama, and University of Oxford. In 2001 she became a part of The London School of Hygiene and Tropical Medicine and, along with being the chair of Virology, is also the co-organiser of the medical microbiology course. The virus that she has dedicated most of her career to is Bluetongue disease that affects sheep and cattle. She became interested in this virus after attending a symposium and was intrigued by the fact that not much was known about the virus that was causing such a nasty and sometimes fatal disease.