Kim Annette Robertson (born 10 March 1957) is a New Zealand former track and field sprinter. She represented New Zealand at three Commonwealth Games, one World Indoor Championship, three IAAF World Cups and three Pacific Conference Games. She was also selected in the 1980 Moscow Olympic team in the 400 meters but did not compete due to the NZ Government boycotting the event.

Robertson was born on 10 March 1957, the middle child of Maurice Robertson [1] and Eileen Hobcraft, in Mt Eden, a suburb of Auckland. Both her parents were athletes in their own right. Her father captained the New Zealand national rugby league team in the 1940s and 1950s and was inducted into the Legends of League (Hall of Fame equivalent) in 2000. Her mother was a sprinter, netball and basketball player for the Auckland province. Robertson was educated at Epsom Girls' Grammar School in Auckland, and Eastern Institute of Technology, Viticulture and Winemaking Dept, Napier, New Zealand.

She joined the Hillsborough Junior Athletic Club when she was seven years old and rarely lost a sprint race from that age through to 13 years old. When she was 13 years old, competing at the Auckland Children's Championships she completed a rare feat of winning all four events she was entered in – 75 meters, 100 meters, long jump and high jump. Her athletic career continued at Epsom Girls’ Grammar where she won the inaugural New Zealand Secondary Schools Championship senior girls sprint double in the 100m and 200m in times that were to last for over 25 years - the 100 meter record of 11.66 still stands [2]. Two weeks later she finished in 3rd place in the New Zealand senior woman's 100m & 200m to secure a place in her first New Zealand team as the youngest member (16 years old and still at high school) of the 1974 Christchurch Commonwealth Games track team. She was also selected in the 4 × 100 meter relay which came 5th in the final.

After ending school Robertson joined up with Tom McIntyre (coach of Olympic medallist John ("Dutch") Holland [3]), one of New Zealand's most successful sprint and hurdles coaches to become unbeatable in New Zealand Championship events in the 100m, 200m and 400m winning 32 national titles from 1976 to 1984 [4]. It was Mr. McIntyre who suggested to Robertson that she should move up to the 400m something which she first attempted at the NZ Track & Field Championships in Hamilton in March 1977. In a very poignant moment Robertson was awarded her gold medal for the 400m by Mr. McIntyre who at the time was 95 years old.

The move up to the 400m distance resulted in her 1st of six 400m titles, immediately breaking the Auckland record. Her times steadily improved until in 1980 she ran a world class time (and new New Zealand Record [5]) of 51.60 in the televised New Zealand Track Series beating the current Commonwealth Games champion Donna Hartley from England. This time ranked Robertson 12th in the world and beat the Olympic Games qualifying time. She repeated this accomplishment one week later in her home city of Auckland running down the opposition in the final 150 meters to win in 51.80. Robertson's time of 51.60 still stands as a New Zealand record – the longest standing Olympic track event record for women. [2]

Unfortunately for Robertson the 1980 New Zealand Olympic team boycotted the Moscow Games and therefore she could not compete. She continued to compete in all sprint events and was 5th in the 1982 Commonwealth Games 400m behind the great Raelene Boyle. In 1985 Robertson was selected to compete in the first ever World Indoor Games in Paris, France. She was selected for both the 60m and 200m. Having never run on an indoor track before Robertson made both finals and won a bronze medal behind world record holder Marita Koch in the 200m [6]. Koch's winning time was 23.09 c.f. Robertson's 3rd place in 23.69. Robertson's times from that championship are still the fastest indoor times run by a New Zealand woman.

In the winter months Robertson excelled in badminton representing Auckland at numerous tournaments and winning the Auckland A Grade singles and doubles in 1978.

Angela Bailey is a Canadian former track and field athlete. She is the Canadian record holder in the 100 metres with her personal best of 10.98 seconds, set in 1987. She also holds the 200 metres indoor national record of 23.32 seconds.

Me'Lisa Barber is an American track and field sprint athlete.

Marilyn Fay Neufville is a retired sprint runner who was active between 1967 and 1971. Neufville broke the world record in the 400 m and won four gold medals and one bronze in various regional championships. Born in Jamaica, she emigrated at eight years old to Great Britain.

Natasha Laren Mayers is a professional track and field sprinter who competes internationally for Saint Vincent and the Grenadines. She is the national record holder over 60 metres, 100 metres and 200 metres. She represented her country at the Summer Olympic Games in 2000 and 2004, and had the honour of national flag bearer at the latter edition. She has also appeared at the IAAF World Championships in Athletics in 2001 and 2003, as well as having taken part at the IAAF World Indoor Championships. 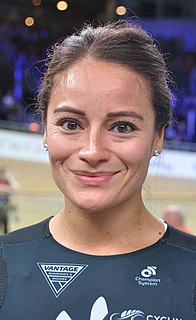 Natasha Hansen is a New Zealand track cyclist who has represented her country at the 2012 and 2016 Summer Olympics.

D'Andre "DeeDee" Hill is an American track and field coach and former athlete. She competed in sprint events, mainly in 100-meter dash. Her personal record in the event was 10.92 seconds. She represented her country over 100 m at the 1996 Atlanta Olympics and shared in a gold medal in the 4×100-meter relay at the 1995 World Championships in Athletics, having run in the heats only.